After God cursed the earth, the war between man and weeds began. And the weeds seem to have the upper hand.

No matter where you live, you can be sure there will be weeds thriving in your garden. I happen to live in central Alberta, Canada, hundreds of miles north of the US border. Our colder climate is considered to be a 3 on the climate scale, as opposed to the warmer 5–7 zones in the Great Lakes area. So our climate is not particularly warm, but that does not bother the weeds. They can outcompete many crop, ornamental, and natural plant communities here just as easily as elsewhere. They do this by grabbing a larger share of the natural resources that all plants need to thrive, including light, water, mineral nutrients, and space.

Anybody who seeks to maintain beautiful gardens or bountiful crops can scarcely ignore the presence of weeds. Christians are especially interested in this topic since “thorns and thistles” are part of God’s curse on nature following the fall of Adam. The thorns and thistles are, of course, part of the disease, predation, disasters, and death which followed the curse.

Now, producing enough food for mankind is fraught with difficulties. Weeds are part of that equation. They simply represent the imbalances that we find between some plants that we cultivate and others that we want to eliminate. Weeds outcompete desirable plants as a result of various character traits. Even though some of these plants aren’t considered weeds in other circumstances, there are plants in several taxonomic categories whose unusually aggressive character traits will always plague us.

The first impressive capacity of many weeds is their ability to germinate faster than other plants. They also keep growing faster so that they crowd out the desirable plants and keep them from obtaining adequate resources. One man who studied the seed germination talents of weeds was Dr. William James Beal of Michigan State University. He was really thinking ahead! In the fall of 1879, he set up a seed germination experiment designed to last 100 years. The experiment, which increased the length of time between attempts to germinate seeds, continues to this day.

Dr. Beal buried 20 narrow-necked glass bottles, which he had filled with moist sand and 50 seeds each of 21 unpopular weed species such as black mustard (Brassica nigra), common ragweed (Ambrosia artemisiifolia), round-leaved mallow (Malva rotundifolia), evening primrose (Oenothera biennis), curled dock (Rumex crispus), and moth mullein (Verbascum blattaria). Every 5, 10, or 20 years, researchers opened one bottle and attempted to germinate the seeds. After 25 years, the seeds of 11 species still germinated; after 50 years, the seeds of 5 species still germinated at levels ranging from 4–62%. The three most successful species were evening primrose, curled dock, and moth mullein.

But the unexpected could still happen. At both 100 and 120 years, 1 seed of round-leaved mallow germinated. The seeds of this species had last germinated in 1899! Also at 100 years, a second species of Verbascum germinated. It did not germinate at 120 years, but a possible Verbascum hybrid showed up at 120 years. These seedlings grew to maturity and mostly produced seeds. So we know that weed seeds sprouting in our gardens may have sat in the soil for a long time.

This ability of weed seeds to survive dormant in soils and then germinate when exposed to light and moist conditions (usually caused by disturbance of the soil) is a particularly advantageous characteristic. It means that a reservoir of weed seeds remains in the soil for many years after the last living plant specimen actually grew there.

But there is another reason weed seeds persist so long in the soil. Unlike crop plants and many plants in natural communities, many weeds exhibit phenotypic (physiologic) plasticity, or the ability to modify their visible characteristics without changing their DNA. Many weeds, such as lamb’s quarters (Chenopodium album), can produce a tiny plant that produces only 4 seeds or a monster 6-foot-high (2 m) plant that yields 100,000 seeds, depending on the habitat. The seeds produced by the large plant, however, will not all germinate at the same time.

This plasticity ensures that some seeds from one plant will remain in the ground for many years. Every time the ground is disturbed, some but not all the seeds will germinate. This explains why we have to keep weeding week after week and year after year! (Also, unlike most plant species, some weeds do not have to wait until they reach a mature size before they can produce seeds. They truly are a curse!)

Why Did God Make Weeds?

Did you know that even weeds were designed for a purpose?

From backyard gardening to shopping mall construction, humans do an awful lot of digging and bulldozing. But all that bare soil needs to be covered as quickly as possible. Exposed soil erodes with rain. Sunlight bakes the microorganisms living beneath the unprotected ground.

Weeds like crabgrass are God’s pioneer plants, colonizing ground that would be uninhabitable to less hardy species. Their roots help prevent erosion, and their plant bodies shield the ground from the sun.

Weeds are on the front line of the biological army when it comes to healing a barren landscape.

As weeds take over a piece of bare earth, a process called ecological succession begins. Succession is the movement of a living community in nature toward a mature ecosystem, like a forest. This important natural process is how plants and animals repopulated the earth after it was destroyed by the global flood of Noah’s day.

But Aren’t Weeds a Result of Sin?

Before sin entered the world, God put Adam and Eve in the garden of Eden to keep it (Genesis 2:15). Adam didn’t have to worry about noxious weeds taking over. However, he probably needed to move and trim plants. So weeding—removing unwanted plants—was likely on the to-do list. But in God’s original creation, all work was enjoyable.

Sadly, work became arduous when God cursed the ground because of Adam and Eve’s disobedience. As a result, some weedy plants like thistles and nettles developed painful or irritating defense structures (Genesis 3:17–18).

Many of the same kinds of plants that are now considered invasive weeds (or their predecessors) were growing in God’s original creation, each masterfully designed for its ecological niche. Since God cursed the ground, that harmonious balance has been disrupted, and weeds often take over less assertive plants.

Noah’s flood also drastically changed the balance of the earth’s plant life. Many populous species before the flood likely became extinct afterward, and brand-new ecosystems formed. Opportunistic plants likely replaced the niche of those tender species that did not survive the flood.

The Restoration of Weeds—and Everything Else

Plants will have a glorious future of redemption when thorns and every other effect of the curse will vanish forever (Revelation 22:3)! Because of the gospel, we can eagerly look forward to our Lord Jesus ruling over the new heavens and new earth (2 Peter 3:13; Revelation 21:1–5).

Erik Lutz worked in Answers in Genesis’ internet outreach department until 2019. Erik and his wife, Patty, are happily raising two daughters and a growing hoard of farm animals on their homestead in Northern Kentucky

Bullies in the Ring

After some weed seeds have germinated, their rapid rate of development and their broad shape are designed to allow the plant to “corner the market” on resources. Faster growing plants will block sunlight from seeds that germinate more slowly, and their rapidly expanding roots will collect more water and nutrients (and occupy more space) than do the native plants. Once some weed species (for example, perennial sow thistle or Sonchus arvensis) have germinated, they spread far and wide with underground stems that send up multiple shoots.

Another advantageous feature of some plants is their ability to release a variety of compounds which depress the seed germination and growth of other plants. This phenomenon (called allelopathy) is exhibited by goldenrod (Solidago), garlic mustard weed (Alliaria petiolata), black walnut trees (Juglans nigra), and eucalyptus trees, among others.

Many weeds can take on shapes that effectively outcompete other plants for resources. Thistles and dandelions (Taraxacum officinale) are particularly good examples of this. Their rosette arrangement of leaves (in a shallow spiral) enables these plants to spread out over competing plants, thus depriving the nearby vegetation of any resources. Moreover, their vigorous tap root is particularly effective at collecting water. The tap root also makes these weeds extremely difficult to remove. If the top part of such a plant is pulled out, for example, the remaining lower piece of tap root then develops several new shoots, which soon appear where formerly there was only one weed. The flowers of dandelion also quickly produce seeds because they do not need to wait for fertilization. The seeds develop without sexual reproduction through a process known as apomixis. Thus, the dandelion can produce seeds far faster than much of the surrounding vegetation.

Dandelion plants have some other features that make them more effective competitors as well. The flowers themselves may be quite prostrate (low to the ground), but the flowering stem stands upright and lengthens when the seed heads (pom poms) appear. This means that the seeds are particularly well exposed to the breezes to ensure long distance dispersal. A study published in the fall of 2018 found that the parachute design of dandelion seeds is uniquely effective for keeping them aloft so that they can be spread over many miles. The seeds eventually descend gracefully, and if they land in a crevice in the soil or a break in the vegetation, a dandelion seed will quickly germinate. 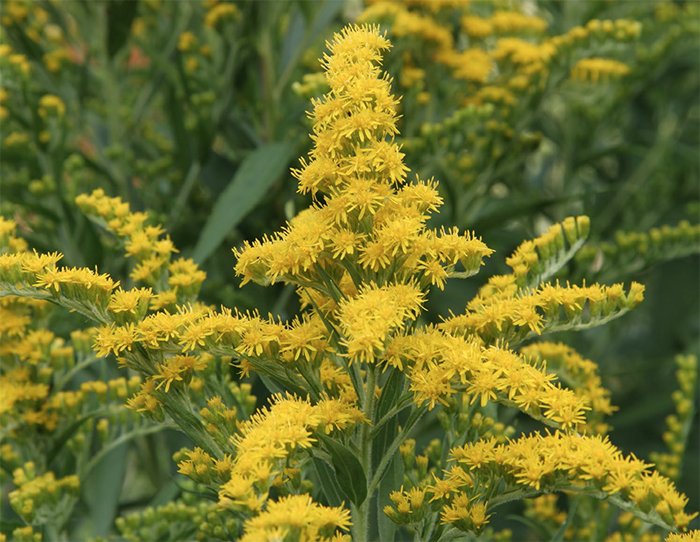 Some weeds, like goldenrod, gain an advantage by releasing a variety of compounds that depress the seed germination of other plants.

The character traits of these familiar weeds force us to reflect on why these plants exhibit such features. In Genesis 3, God told Adam that the soil (his crops) would bring forth “thorns and thistles,” plaguing his efforts to feed himself and his family. It probably did not take long for his descendants to notice how some weeds were particularly effective at depressing their crop yields. The war between man and weeds had begun.

Ever since then, mankind has had to worry about how the “wheat and the tares” interact. Meanwhile we continue to invest billions of dollars in various mechanical devices and farming techniques to try to keep one step ahead of the ingenious weeds. It did not have to be that way. But every time we pull up a weed, we can only reflect on the lost paradise and long for the day when all things will be restored. Even in our fallen world, we give thanks for all the wonderful diversity and beauty that we see among plants.

Dr. Margaret Helder earned a PhD in botany from Western University in London, Ontario (Canada). For several years she lectured in biosciences at Brock University in St. Catharines, Ontario. She has lectured on origins in Canada, Australia, and the United States, and served as president of the Creation Science Association of Alberta for many years.

Previous Article The Chicken or the Egg? Next Article Is a Bigger Brain Better?