Is a Bigger Brain Better?

by Dr. David A. DeWitt on May 1, 2019
Featured in Answers Magazine
Audio Version
Share:
Email Using:
Gmail Yahoo! Outlook Other

When it comes to intelligence, the size of your noggin isn’t a factor.

If I could take out my brain and prove that mine is bigger than yours, would that mean I’m smarter than you? Hopefully, you’d say no.

Consider this. The average brain size is different between men and women (men have bigger brains). Also, the adult brain gets smaller as we age. But only an imbecile would say that men are smarter than women or that older people are less intelligent than younger people!

Yet that’s just what evolutionary paleontologists have been doing since the discovery of the first “early” human fossils in the 1800s. With each new find, one of the first things scientists wanted to know was its brain size (or cranial capacity). If the skull was smaller, they assumed the brain was less evolved and less intelligent than ours.

Lately, the assumption that brain size reflects intelligence has fallen on the rocks. We now know that cranial capacity—or the volume within the skull where the brain is housed—isn’t a fail-safe measure of either brain size or intelligence. Much more is involved.

You might assume that larger bodies need larger brains to perform more functions. To a degree, this is true, so it’s important to keep in mind the relative body size.

In fact, scientists have come up with a measurement called brain-to-body-size ratio. The human brain is much larger compared to our body (1/40) than the brains of dolphins (1/80) or elephants (1/600). That also may help explain why men generally have bigger brains than women, by the way. (And since larger women have larger brains than smaller men, it seems to be a body size issue, not a gender issue.)

Interestingly, the tiny shrew’s brain has a much larger brain ratio than any other mammal (1/10). Yet we know the shrew isn’t at the head of the class. So clearly something more is involved in comparing intelligence. Because shrews need a minimum number of neurons to get the job done, there is a limit to how small their brain can get and still function.

For decades, scientists have tried to determine the correlation between brain size and intelligence. Such studies have yielded mixed results, though there does appear to be a weak correlation within humans. Yet establishing such a correlation is difficult because scientists still have not agreed on a good definition of intelligence or an absolute way to measure it.

To make things worse, scientists are not entirely sure what to measure within the brain. Even if you accept the outdated standard of cranial capacity, it can only give a maximum brain size, not the actual brain size. This is because much of the cranium’s volume is a special fluid that bathes the brain, called cerebral spinal fluid.

Brain surface area may get closer to a good measurement of intelligence. Why? Our neurons are packed into gray matter at the surface of the brain, and more surface area means more brain power. Folding up the layers of neurons increases the surface area possible within the same space. And when it comes to folded brains, humans can’t be outfolded.

For example, the mouse brain is completely smooth. In contrast, the human brain appears lumpy with ridges (gyri) and grooves (sulci). This folding of the brain nearly doubles the surface area—and the number of neurons—possible within the same volume. If you unfold the human brain, the surface area ranges from 1,500 to 2,000 sq. cm. A shrew brain, in contrast, unfolds to 0.8 sq. cm.

Looks Can Be Deceiving

Have you ever heard the insult “bird brain”? It turns out that this is a compliment! Birds are extremely smart. Common ravens are among the smartest of all animals—even though their brains are only the size of a walnut (14 g). In many ways they can match monkeys, whose brains are the size of a pear (53 g).

Recent studies on ravens and other animals show that brain size is not the main factor in intelligence. For instance, ravens have more densely packed neurons than monkeys. And these neurons are packed into the forebrain, where higher-order thinking occurs.

The bottom line? We still don’t fully understand the relationship between brains and intelligence. But we know that God created many kinds of creatures with very different brain configurations to fulfill their unique purposes. 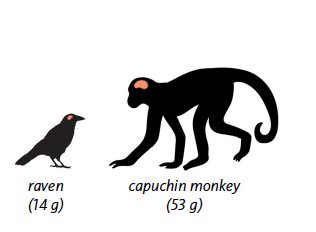 Ravens have an edge in some higher-thinking skills, including solving puzzles and making tools in ways monkeys can’t. 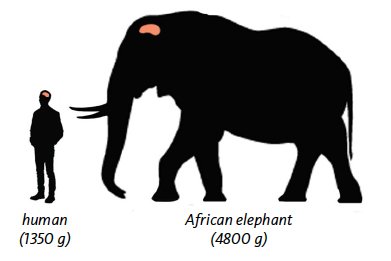 Humans may have smaller brains than some large mammals, but nobody doubts which is smarter.

Better to Focus on Neurons and Synapses

However, comparing gray matter doesn’t tell the whole story. The brain contains several different kinds of cells, not just neurons. The neurons may be the most prominent cells (and there are an estimated 10,000 different types of neurons in the human brain). But the brain includes several types of support cells called glial cells. Microglia, for example, are tiny cells that serve an immune-like function. One of their roles is to clear out debris in the event of a brain injury. Astrocytes are another type of support cell, which protects neurons by establishing a barrier between the neurons and blood. These cells don’t seem to be tied directly to intelligence, though we can’t be dogmatic.

The key is to compare the number of neurons. Only 10–50% of the cells in the human brain are neurons. The adult human brain has an estimated 100 billion neurons, beating almost every kind of animal except elephants and whales.

So we need to look at another critical factor related to intelligence: neuron density. Neurons come in a variety of sizes. Where neurons are smaller, more can be found in the same amount of space. In contrast, if neurons are larger, then fewer will be present and the neuronal density lower. Humans stand out in their neuron density, but even here we aren’t the undisputed champs.

More important than the density of neurons, however, is something known as the synaptic density. Neurons make connections with other neurons called synapses. A synapsis is like a bridge over which one neuron sends a signaling neurotransmitter to another neuron. The number of synapses on a given neuron can be as high as 7,000, meaning that a neuron can provide or receive input to or from 7,000 different neurons. With 100 billion neurons, this brings the total number of synapses in the range of 100 trillion. No animal on earth comes close to this number.

The key is not the size or weight of the brain, but how much power can be packed into a small space.

The key is not the size or weight of the brain, but how much power can be packed into a small space. Based on the Bible’s teaching that we’re all made in God’s image and descended from Adam, we can be sure that the humans closer to Adam’s time were just as intelligent as you and I are, if not more so. No matter our “cranial capacity,” we can all know and honor our Creator!

One Size Doesn’t Fit All

Brain volume varies widely among modern humans and differs by age and gender. One study reported that the average volume for males is 1274 cc while females average 1131 cc. However, consider how wide the range is. Males are 1053–1498 cc, and females are 975–1398 cc. This means that the normal range of a modern human brain is at least 975–1498. With such a wide range, the link between brain size and intelligence in our human ancestors loses steam.

Among the Neanderthal people, cranial capacity averaged about 1350 cc with a range of 1250–1650 cc. That’s larger than ours today, but the Neanderthals had a bulge in the back, and their skull was typically long and narrow. Yet Neanderthal brain size overlaps that of humans living today.

Humans labelled as Homo erectus had a range of cranial capacities of about 850–1200 cc. Fossil specimens from Africa are smaller, with an average of about 930 cc, while fossils from China have an average of 1030 cc. Yet Homo erectus brain size also overlaps that of humans living today.

Interestingly, the diminutive Homo floresiensis (nicknamed “the Hobbit”) found on an Indonesian island has a cranial capacity of just over 400 cc. Despite an exceptionally small brain size, they made stone tools and built boats. Clearly, human brains are designed to function fully, whether the brain of a giant or a little person.

Dr. David A. DeWitt holds a PhD in neuroscience from Case Western Reserve University. He is currently chair of the Department of Biology and Chemistry at Liberty University, and his primary research efforts have focused on the mechanisms causing cellular damage in Alzheimer’s disease.
Previous Article Those Cursed Weeds!