Who Was Noah’s Wife?

The Bible often doesn’t tell us everything we may want to know about a given person or topic. Nearly everything we know about Noah and the Ark comes from just four chapters in Genesis. Over time, traditions are often developed in an effort to satisfy our curiosities about these subjects. While it isn’t necessarily wrong to speculate about such matters, we need to remember that they are nothing more than speculations, and we must make sure that these ideas do not contradict Scripture. 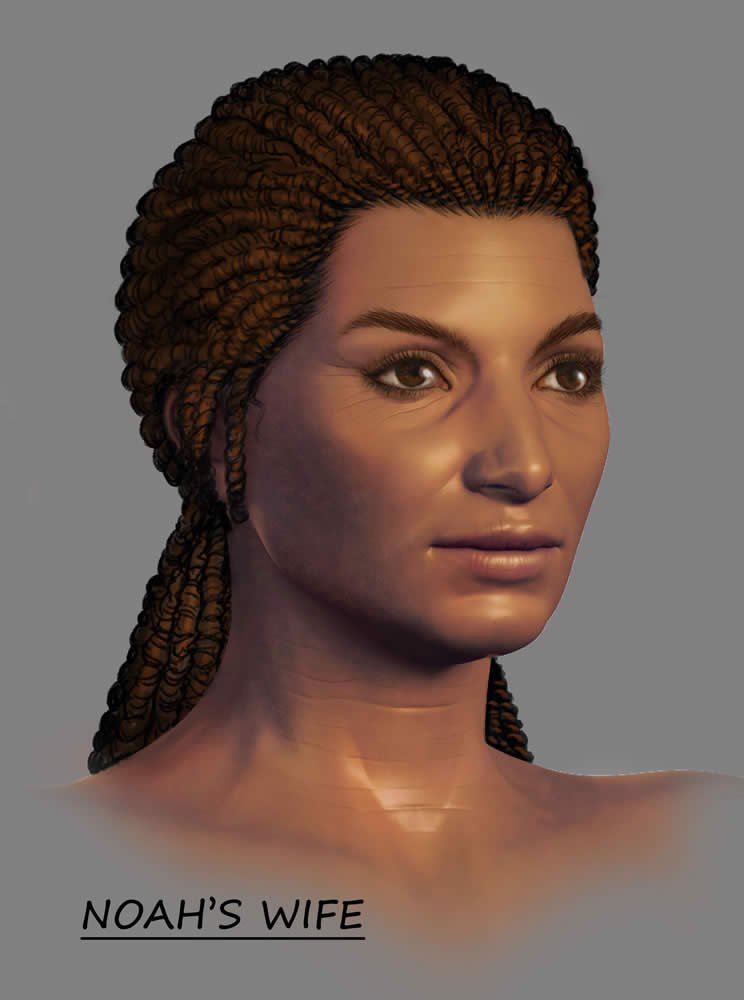 This concept image for Noah’s wife was made by the design team of the Ark Encounter.

Who Was Noah’s Wife?

This is a fairly common question for those who have given some thought to the biblical account of the Flood. We read about Noah and his sons, Shem, Ham, and Japheth (Genesis 5:32), but we are not told the names of Noah’s wife or his sons’ wives. So we only know the names of four of the eight people who survived the global Flood.

Much speculation has arisen about the name of our great, great . . . grandmother (we all go back to Noah and his wife, and further back to Adam and Eve). Numerous books about Noah and his family have been written over the centuries, and several names have been given for his wife. In 1941, Francis Lee Utley published a paper in the journal Speculum titled, “The One Hundred and Three Names of Noah’s Wife.” This article will survey three of the popular choices and explain why they were probably chosen. Keep in mind that since the Holy Spirit did not inspire the biblical writer to record her name, we cannot be certain that any of these options are accurate.

Perhaps the most common name given to Noah’s wife is Naamah. The Jewish writing known as Genesis Rabba (c. 5th century AD) states, “Naamah, daughter of Lemech and sister to Tubalcain, was Noah’s wife.” Near the end of the listing of Cain’s descendants in the Bible we read these words:

Then Lamech took for himself two wives: the name of one was Adah, and the name of the second was Zillah. And Adah bore Jabal . . . his brother’s name was Jubal . . . And as for Zillah, she also bore Tubal-Cain . . . and the sister of Tubal-Cain was Naamah. (Genesis 4:19–22)

The rationale for choosing Naamah as the name for Noah’s wife is that some interpreters believe the mention of Naamah in Genesis 4:22 must have some special significance not explained in the text. She may have been an important person, but the Bible does not tell us anything other than her name and the names of a few immediate family members. She may have lived close to the same time as Noah, although she was in the eighth generation and Noah was in the tenth.

The non-canonical Jewish work known as the Book of Jubilees (c. 2nd century BC) has been called “Little Genesis” because it covers many of the same events while embellishing some of the details. Jubilees 4:33 states that “Noah took to himself a wife, and her name was Emzara, the daughter of Rake’el, the daughter of his father’s brother.” The name Emzara does not appear in Scripture at all, but some people think that it was chosen because it may mean “mother of Sarai” or “ancestor of Sarai,” so the name may have been created to stress the link between Noah and Abraham.

A third name that has been assigned to Noah’s wife is Barthenos. The fourth century bishop of Salamis, Epiphanius, gave her this name. However, he likely confused the name of Noah’s wife with that commonly given to his mother. Ancient Jewish literature, such as the Genesis Apocryphon (Column 2, Line 3) and the Book of Jubilees (4:28), identified Lamech’s wife (Noah’s mother) as Batenosh. The name simply means “daughter of Enosh” (Enosh was Adam’s grandson through Seth). The name was probably simply made up in Jewish traditions and is unlikely to have really been the name of Lamech’s wife or Noah’s wife.

While we can’t be sure of Mrs. Noah’s name, we do know that she survived the Flood along with seven of her family members on the Ark.

While we can’t be sure of Mrs. Noah’s name, we do know that she survived the Flood along with seven of her family members on the Ark. The Bible doesn’t specifically tell us about her character either, so we really don’t know if she was a faithful follower of God and loyal wife to Noah. However, it is difficult to imagine that she didn’t faithfully support and assist Noah through the incredible task of building the Ark and during the year-long stay aboard the vessel during the Flood.

It may be fun to explore the various names given to Noah’s wife and the rationale behind the choices, but we need to remember that it is all speculation since the Bible does not provide this detail. God’s Word is our only infallible source of information about Noah, the Ark, and the Flood, and we need to build our thinking upon it.

The Ark Encounter will portray Noah and his family aboard the Ark, and we need to decide how to depict these individuals, including the unnamed woman who is grandmother to us all. So speculating about these people is necessary in some cases, but we must strive to keep these educated guesses in line with biblical parameters.

To find out more about how you can take part in assisting us with this tremendous faith-affirming, gospel-proclaiming project, please visit ArkEncounter.com.