Recent news reports have said that Betelgeuse is soon to erupt in a supernova. If Betelgeuse were to go supernova, then it would become incredibly bright, about as bright as the moon, rendering it easily visible during the day. But its light would be packed into a tiny pinpoint, making it difficult to look directly at it. That would be quite a spectacle, a supernova this bright would be unparalleled in human history. But is it likely to happen?

Betelgeuse is the second-brightest star in the constellation Orion, and it usually is among the dozen or so brightest stars in our sky. Betelgeuse is red, making it one of the few stars in which we can readily see color. About 700 light-years away and to appear so bright, Betelgeuse must be a huge star. Betelgeuse is about a thousand times larger than the sun. If it were at the center of the solar system, the surface of Betelgeuse would extend nearly to the orbit of Jupiter. Astronomers call Betelgeuse a red supergiant. Being so large, Betelgeuse has the second-largest angular diameter of any star: about 0.05 arcseconds. That is the apparent size of a dime when viewed from 50 miles, so don’t go looking for this yourself. Astronomers estimate that Betelgeuse has a mass 10–15 times that of the sun. 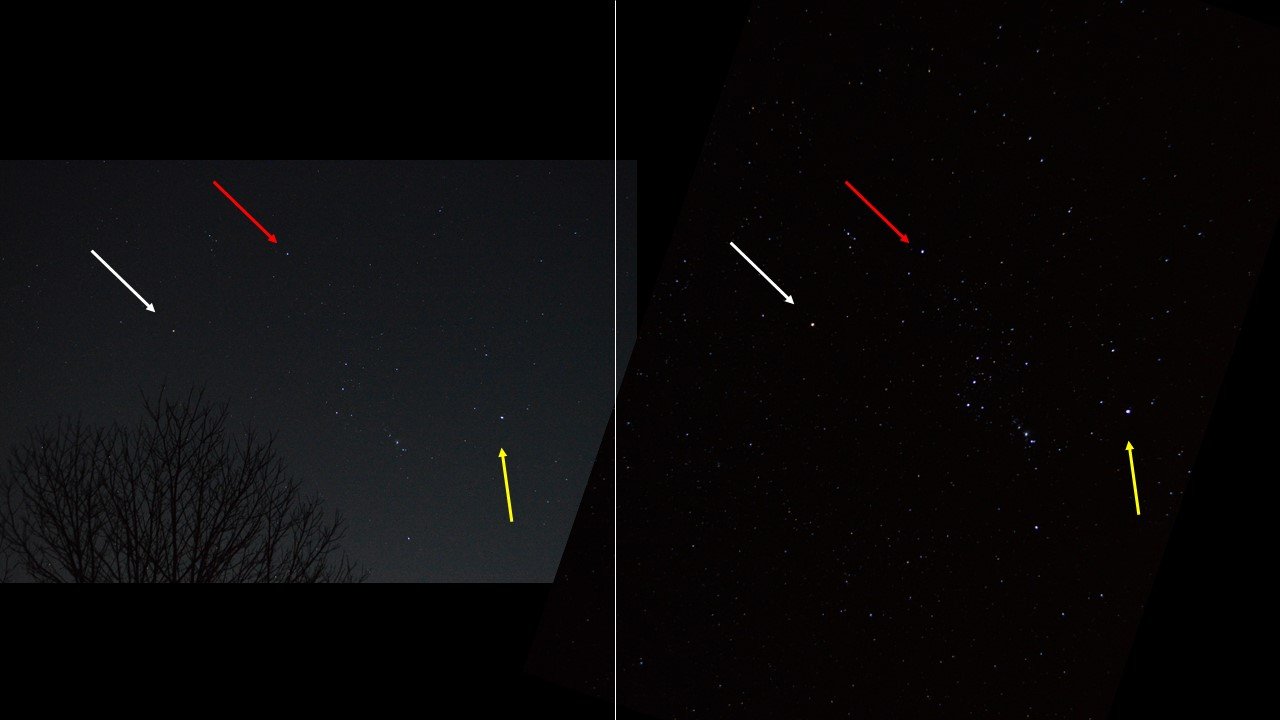 I took the photo of the Orion constellation on the right nearly four years ago, and I took the one on the left New Years Day 2020. The white arrows point to Betelgeuse. The sky was much brighter this year (a nearly first quarter moon, and I may have been in a dark sky when I took the other one). Don’t compare the brightness of Betelgeuse between the two images. Rather, compare Betelgeuse to the other stars of Orion in the respective photos. You’ll see that in the photo on the right, Betelgeuse is the second brightest to Rigel (yellow arrow), the bright star to the right at the “foot” of Orion. But in the photo on the left, Betelgeuse is comparable in brightness to Bellatrix (red arrow), the other “shoulder” star to its upper right, and only slightly brighter than the three belt stars near the center.

Betelgeuse is a variable star, meaning that its brightness changes. Its changes in brightness typically are over a half magnitude and are a bit irregular. It appears to have two periods, a main one of about 400 days and a second period of about 2,100 days. Right now, Betelgeuse is the 21st brightest star in the sky. However, in recent months Betelgeuse has faded more than usual. It’s the faintest that Betelgeuse has appeared in a half century, if not longer. If this trend were to continue, it would be record setting. However, Betelgeuse likely is to recover soon and return to its normal brightness.

The recent odd behavior of Betelgeuse could be a harbinger of a big blow. Or it could just be a slight hiccup along the process.

So, why all the discussion about this relatively rare behavior? Astronomers have formed theories about how stars develop or evolve. High-mass stars, such as Betelgeuse, are thought to evolve very quickly. Betelgeuse is estimated to be less than ten million years old, and it is considered near the end of its lifecycle. Contrast that to the sun, which is thought to be 4.6 billion years old and to have only exhausted half of its lifetime. According to theories of stellar evolution, massive stars such as Betelgeuse end up as red supergiants just before exploding as supernovae. The process of becoming a supernova supposedly is presaged by increasing instability. Therefore, the recent odd behavior of Betelgeuse could be a harbinger of a big blow. Or it could just be a slight hiccup along the process. You see, the time from becoming a red supergiant to a supernova could be 100,000 years. The exact length of time is not known, nor do we know how long Betelgeuse has been a red supergiant. So, Betelgeuse could blow tomorrow. Or in 100,000 years. Why the hype? Well, the possibility of a star as bright as Betelgeuse soon becoming a supernova is news. A star as bright as Betelgeuse not becoming a supernova is not news.

Keep in mind that this possibility is based upon ideas of stellar evolution over vast ages. That assumes that astronomers’ models are correct. There are good reasons to doubt this because astronomers often are surprised when stars change. For instance, a relatively bright supernova in 1987 caused rewriting of astronomy textbooks. It happened because that supernova didn’t obey any of the expectations. Also, keep in mind that stellar evolution is based upon long time periods, something that biblical chronology does not allow.