A Special Event at the Creation Museum on November 11, 2019: Viewing a Solar Transit of Mercury

What Is a Solar Transit?

At the Creation Museum on November 11, we will have the opportunity to view a relatively rare solar transit of Mercury. A solar transit occurs when a body that appears smaller than the sun passes between the earth and sun, blocking a portion of the sun’s surface. This contrasts with a solar eclipse, which occurs when an object (the moon), appearing about the same size of the sun, passes in front of the sun. The only astronomical bodies that produce solar transits are Mercury and Venus. In case you’re wondering, an occultation is when a larger appearing body passes in front of a smaller appearing body, entirely blocking out the smaller appearing body. For instance, the moon sometimes occults stars, something that I’ve observed many times.

Transits of Venus are very rare. They happen in pairs over a 243-year cycle. The pairs of Venus transits are separated by eight years, with alternating intervals of 105.5 and 121.5 years. The most recent transit of Venus was in 2012. The next one will be in 2117. I barely saw the 2012 transit of Venus. 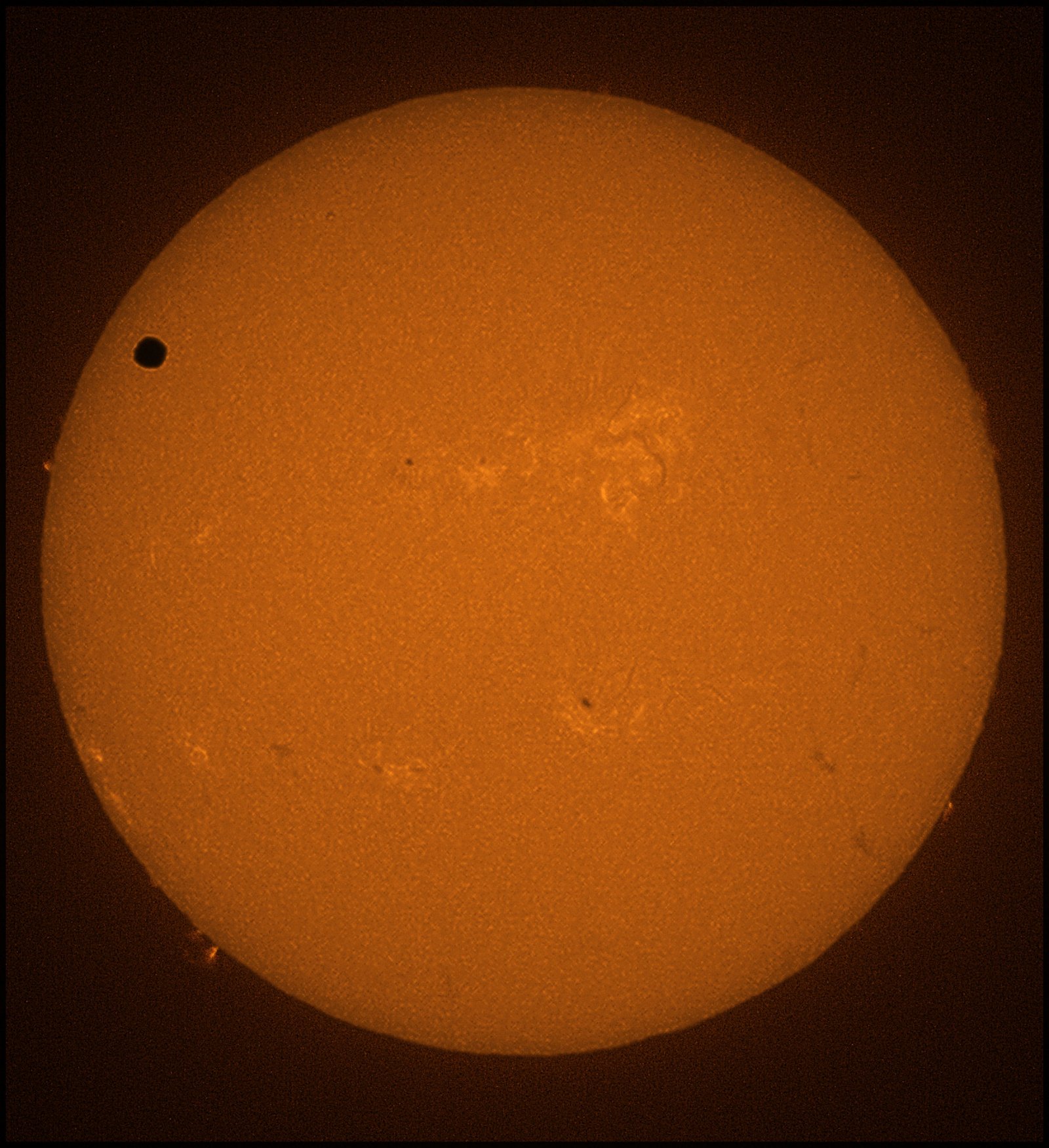 On average, Mercury transits the sun 13–14 times per century. However, one must be on the daylit side of the earth to see a transit.

How rare is a solar transit of Mercury? They are more common than transits of Venus, but they don’t follow such a regular pattern. On average, Mercury transits the sun 13–14 times per century. However, one must be on the daylit side of the earth to see a transit. And the sky must be clear. I’ve seen only one Mercury transit, back in 1970, when I was in high school. At the time, I thought that I probably would have seen more transits of Mercury in my lifetime, but at each opportunity since, the transits either were during the night for me or the sky was cloudy. The next two transits, in 2032 and 2039, will happen during night in North America. So, if we miss this year’s transit, our next opportunity to see a transit will be in 2049. Realistically, this year probably is my last chance to see a Mercury transit (I’ll be nearly 95 years old in May 2049).

What time will the transit be? The transit will begin at approximately 7:36 a.m. Eastern Standard Time (EST). This is about 20 minutes after sunrise at the Creation Museum. The transit will end a few minutes past 1:00 p.m. (EST). Mercury will appear closest to the sun’s center at 10:20 a.m. EST.

If the skies are clear on November 11, between 9:30 and 11 am, telescopes will be watching the event in the Creation Museum's front plaza.

Will we at the Creation Museum do anything special that day? Indeed we will, weather permitting. We will set up telescopes in the plaza in front of the Creation Museum. The Museum will open at 10:00 a.m., shortly before the middle of the transit. However, we plan to open the gates to our guests at 9:30 a.m. that day to allow them a view of the transit (the rest of the Museum won’t open until 10:00 a.m.). Don’t fret about missing the first half of the transit. The sun will be very low in the sky for the first couple of hours. Besides dodging tree branches and other obstructions, objects low in the sky tend to be very blurry when viewed through a telescope. We will be able to view the best three hours of the transit, when the sun is much higher in the sky. There will be no special charge, as the viewing of the transit will be included with Museum admission that day.

Mercury will look like a small black dot slowly moving across the sun’s disk.

What will we expect to see? Mercury will look like a small black dot slowly moving across the sun’s disk. Mercury’s dot will only be about 0.5% of the size of the sun. In contrast, the shadow of Venus in the photo is about 3% of the sun’s diameter. It would be nice if there were sunspots visible that day to compare their size and appearance to Mercury’s shadow. But we’re in sunspot minimum now and will be for another year or two, so it’s not likely that any significant spots will be visible that day. There will be no need to spend the entire three hours looking at the transit—you can come and go to check the progress of Mercury’s motion across the sun’s disk.

And remember, this event is weather permitting. If the sky is cloudy that day, we won’t be setting up telescopes.

Now through September 30, 2019, we have a generous donor who will match dollar-for-dollar up to half-a-million dollars for the Creation Museum planetarium upgrade! If we take full advantage of this matching gift opportunity, everything we need to raise will be raised by the end of the month. If you can help, and get your donation doubled before the month ends, please visit AnswersinGenesis.org/donate.