Did Pluto Once Have an Ocean?

In the summer of 2015, the New Horizons mission provided the first photographs of surface details on Pluto. What those photos revealed was unexpected. Rather than showing a heavily cratered surface, the crater density was far less than expected, with some regions of Pluto having very few craters. Following the model used to interpret all other solid surfaces in the solar system, this indicated that Pluto’s surface is young. Such a young surface would require geological activity, and geological activity requires heat. But where would a relatively small body very far from the sun get that heat? In the intervening five years, there has been much discussion of how Pluto’s surface came to be.

Pluto: From Underworld to Underwater?

More recently, there has been discussion whether Pluto once had or perhaps still does have a subsurface layer of liquid water. Why would Pluto have water?

More recently, there has been discussion whether Pluto once had or perhaps still does have a subsurface layer of liquid water. Why would Pluto have water? The density of Pluto is 1.85 g/cm3. Rocks tend to have density of about 3 g/cm3, which is much greater than Pluto’s density, so Pluto cannot be an entirely rocky body. Water is one of the most abundant molecules in the universe, so it isn’t surprising that water is common in the solar system. This is particularly true for small bodies far from the sun, such as comets and the natural satellites, or moons, of the outer planets. Many of the natural satellites of the outer planets have densities comparable to Pluto’s density, which is best explained by their being a mixture of water and rock. Some of natural satellites of the outer planets, such as Jupiter’s Europa and Saturn’s Enceladus, reflect light very well, suggesting that their surfaces likely are ice.

A surface of ice on these two bodies suggests that their rock and ice are not thoroughly mixed but rather are layered according to density, with the denser rock sinking toward their centers, with the less dense ice rising to their surfaces. Scientists would say that these bodies are differentiated. Darker, low-density natural satellites, such as Jupiter’s Ganymede and Callisto, indicate that they are not so differentiated, with their ice and rock more mixed. Differentiation implies geological activity, and indeed there is a correlation between low crater density and the required geological activity.

What about the possibility of liquid water existing beneath the ice surface? For a quarter century, many planetary scientists have thought that Europa has a subsurface layer of liquid water. This conclusion is based upon surface features on Europa that are similar to features of pack ice floating on the Arctic and Antarctic waters, where fracture and refreezing occurs. Long linear cracks on Enceladus are similarly interpreted. Furthermore, the Cassini spacecraft photographed geysers erupting from Enceladus, indicating that Enceladus has subsurface liquid water today.

Did Pluto Heat up or Freeze Over?

The most likely candidate for the agent behind Pluto’s geological activity is liquid water. This brings up questions about the history of Pluto. Did Pluto have a hot start, with some of its water in a liquid form early on? Or did Pluto have a cold start, with its water initially being solid followed by melting? Is the water still liquid, or has it (re)frozen? A paper presented at the 51st Lunar and Planetary Science Conference in March addressed these questions. The answer relies upon water’s peculiar property of expanding as it freezes. If there once was a subsurface ocean on Pluto that froze, then it ought to have expanded, producing extension features on its surface. But if some of Pluto’s interior ice melted to form liquid water, then it would have contracted, producing compression features on Pluto’s surface. If Pluto went through both processes, then both types of features ought to be on Pluto’s surface. 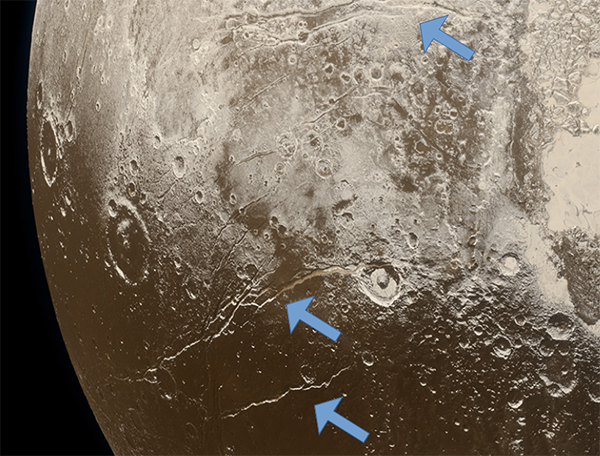 The researchers concluded that Pluto must have formed over a period of 30,000 years or less.

The authors of the study looked for evidence of both compressive and extensive processes on Pluto. They identified grabens on the Plutonian surface. A graben is a depressed block of crust bordered by parallel faults. It is indicative of an extended surface. The rigidity of the crust opposes extension, resulting in parallel faulting to allow more surface area, followed by downward slippage of the crust block along the faults. On the other hand, the new study found no compression features on Pluto’s surface. This information constrains possible histories of Pluto. The lack of compression features indicates that the interior of Pluto never melted. But the grabens indicate that there once was liquid water inside Pluto and that at least some of that water has frozen. This eliminates the cold start model in favor of Pluto having a hot start. It is very unlikely that Pluto could have formed naturalistically from bodies initially with liquid water, so how could the hadean start for Pluto have proceeded? The thinking is that the gravitational potential energy released as rocky/icy particles amalgamated into Pluto melted part of the ice, resulting in a subsurface ocean that eventually refroze, producing the grabens. But this necessity further constrains the time involved in Pluto’s formation. If formation took too long, the heat was produced far too slowly to melt the ice. The researchers concluded that Pluto must have formed over a period of 30,000 years or less. 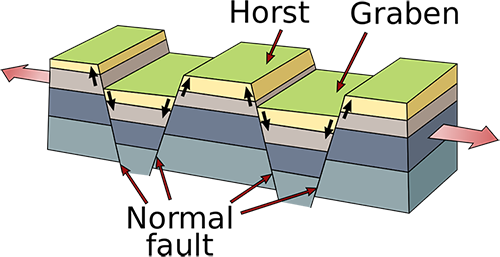 Geological Structure of Horst and Graben

For some time I have argued for divinely-orchestrated formation processes during the creation week.

The paradigm of solar system origin and evolution has been one of gradual formation of bodies through a hierarchal accumulation of small bodies into much larger bodies. Being a natural process, this would seem to require much time. Therefore, a timescale of less than 30,000 years is astonishing. For some time I have argued for divinely-orchestrated formation processes during the creation week. However, in contrast to the naturalistic explanation, these processes were directed and very brief, each one taking less than a day. While 30,000 years is much greater than the timescale I would like, it is significantly shorter than generally believed by evolutionary scientists. Also keep in mind that this 30,000-year estimate is an upper limit; the actual time involved could have been much shorter. Furthermore, the creation model can allow for some continued development after the creation week. Therefore, this new study about Pluto’s past is welcome news.