Last year, as the world mourned the passing of the first man on the moon, Neil Armstrong, a Mars robotic rover reminded us about man’s ongoing plans to set foot on other worlds. 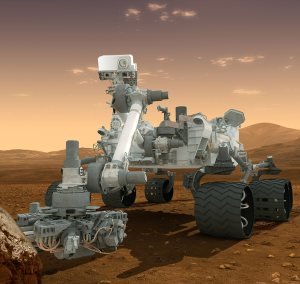 NASA rover, Curiosity, landed on Mars with a mission to search for signs of past life.
Image credit: NASA/JPL-Caltech

Curiosity, an impressive roving laboratory, touched down on Mars on August 6 of last year.1 While one mission is to scout for a possible manned landing in twenty years, the main rationale for this two-and-a-half-billion-dollar project is to find evidence that life once existed on the Red Planet.

To search for life, Curiosity is equipped to detect and analyze the chemicals in Martian soil. Life requires a minimal amount of carbon, hydrogen, nitrogen, oxygen, phosphorous, and sulfur; so researchers hope that Curiosity’s lab results will reveal the presence of those minimum quantities. Such a result could indicate that some form of life may exist on Mars today or may have existed in the past.

A second objective is to look for biosignatures from life now on Mars. The Viking probes conducted similar studies in 1976 and encountered some unexpected chemical reactions in the soil, but none involving life.

The Bible does not say that God did not create bacteria, animals, or plants elsewhere in the universe. But His Word does tell us that He created all life on earth during the first six days of Creation Week about 6,000 years ago. Evolutionists desperately want to find evidence of life elsewhere (even if it’s only microscopic) to justify their assumption that life could easily have evolved anywhere conditions are right, even though no mechanism has been observed on earth to convert non-living elements into living things.

Previous Article Junk Science Next Article Giant Controversy Without Cause