A Field Trip to an Evolving Planet

A famed museum, The Field Museum in Chicago, is the newest battlefront in the ever-growing creation/evolution controversy over what to truly believe about life’s origins.

A famed museum is the newest battlefront in the ever-growing creation/evolution controversy over what to truly believe about life’s origins. And while its brand-new $17 million Evolving Planet exhibit does not explicitly mention (at least, that we could find) either creation or intelligent design, it was obvious, nevertheless, that the exhibition is designed to convince visitors (including young people, especially through the liberal use of one icon that most children find fascinating: dinosaurs) that there should be no doubt about the validity of evolution. The creation/ID vs. evolution controversy was the elephant in the room that went unmentioned.

In fact, the glaring absence of any mention of the intensifying origins debate prompted a secular reporter to observe that a primary purpose of this new exhibition was “to state the case for science and evolution in the national debate over evolutionary theory versus creationism and intelligent design.”1 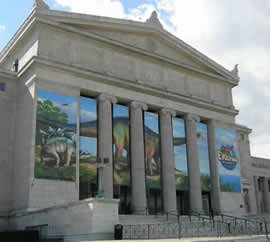 On Friday, The Field Museum in downtown Chicago—an institution well known for world-class displays, such as the famous T. rex skeleton called “Sue”—opened an impressive, yet, as a whole, visually disappointing, permanent exhibit called Evolving Planet. While some of the high-definition screens and interactive displays (along with its renowned dinosaur skeletons) were of high quality, most of the displays were cluttered with too much text and were largely static.

Now, that is not to say that Evolving Planet won’t have an impact, for the sheer number of displays will impress visitors with what appears to be a cornucopia of evidence for evolution. Impressionable young people, many of whom may not take the time to read much of the text printed on the walls and glass displays, will nevertheless leave the exhibit with the idea that the museum has presented a veritable encyclopedia of convincing proofs of molecules-to-man evolution.

Evolving Planet traces the evolutionary story of the history of life on earth from 4.5 billion years ago to the present. AiG’s Creation Museum, to open next spring, is similarly a “walk through history”—but according to the Bible’s history from Genesis to Revelation.

The Polls and Science Museums

Gallup polls going back to 1982 have never showed a figure lower than 44% of Americans agreeing to the statement that “God created humans pretty much in their present form either exactly as the Bible describes it or within the last 10,000 years.” Thus about half of Americans believe that humans evolved (some say, though, that God may have helped in the process, which AiG totally rejects).

A Zogby poll released a few weeks ago, with a different, but related question, showed that 69% of Americans support the presentation of intelligent design as a part of a high school’s curriculum, with 21 percent believing only Darwin’s theory of evolution should taught, as reported by UPI.

Over the decades, evolutionary activists have been alarmed that these numbers in support of creation/ID have not been declining (even with more intensive evolutionary indoctrination through the schools and media). The grassroots approach of creationist organizations to distribute materials throughout the country (especially via teaching conferences) is appearing to be an effective counter to what evolutionists are doing.

Therefore, expect more science museums to follow the pattern of the Field, whose president recently declared that museums need to be the leaders in defense of evolution because “we don’t have the same kind of intimidation that schools have.” (John McCarter, quoted by the Chicago Sun-Times, March 8, 2006).

The exhibit’s pathway in The Field Museum begins in a room that offers two guesses as to how life started: either as bacteria in the deep ocean or in deep space (i.e., transported to Earth by meteorites). Read Dr. David DeWitt’s article on origin-of-life theories (which includes links to other similarly themed articles), “The Origin of Life: A Problem for Evolution.”

This is one of the few parts of the exhibition that was not presented with dogmatism. (Although transferring the problem of how life could have formed to outer space is a convenient way to try to overcome an insurmountable challenge for evolutionists.) It appears that there is little doubt in the exhibit designers’ minds, however, that evolution somehow managed to circumvent the biogenetic law (i.e., life does not come from non-life) and then proceeded unguided for billions of years to eventually produce higher forms of life (and ultimately humans).

Frustratingly, so much of the exhibition presents statement after statement in which evolution is simply assumed to be true … yet with little attempt at substantiation. Where the museum appears to present evidence for evolution, it is really what is written by the museum staff that “explains” and interprets what’s in the display case—not the evidence itself—that says anything. That is the way evolution is presented throughout Evolving Planet time and time again, without hinting at any alternative explanations for the evidence.2

The discriminating visitor should keep that in mind when touring any science museum that presents evolution as fact: what is inside the displays usually “says” very little; but what has been interpreted for the visitor by the secular scientists and written on the attached signs is the so-called evidence. (See our article on how such evidence needs to be interpreted and does not speak for itself, “"Searching.”)

The growing belief among evolutionists that birds evolved from dinosaurs (in fact, that birds are dinosaurs) is treated as fact at The Field Museum’s new exhibit.

The middle portion of the exhibition features a large display of dinosaur fossils that has been showcased in the museum for years, plus some relatively new ones. (The first third and last third of Evolving Planet seem to be new exhibit sections that are sandwiched around the Field’s long-standing dinosaur collection.) As the Tribune reporter wrote, visitors here are assured—with several skeletons on display—that dinosaurs indeed “were real” (an apparent reference to some ill-informed Christians who, sadly, have denied the existence of dinosaurs because they think this somehow challenges their faith). Our article “Dinosaurs and the Bible” argues that dinosaurs are better explained within biblical history, not within the evolution story.

A life-size model of “Lucy” at Evolving Planet.

Toward the end of the exhibition, there is a display of hominids (i.e., man’s alleged ape-like ancestors), including a very life-like reproduction of the Australopithecine “Lucy.” The pro-evolution, well-trafficked website PhysOrg.com, in describing this Field display, declared that Lucy’s “discovery in 1974 proved that humans walked upright before their brains developed.”4 It proved no such thing, and it does not require a creationist to say that, for even many evolutionists question whether “Lucy” is in the family tree of humans.

The saddest aspect about Saturday’s visit was seeing so many children walking through the exhibit with their parents and grandparents. We would estimate that about two-thirds were under 13. As Carl Kerby, AiG’s Vice President for Ministry Relations, remarked as he finished the tour: “These parents just don’t know what they’re doing. I overheard one mother answering her daughter’s question about why one ape-like creature was so hairy, and she answered: ‘Because she was evolving from the apes,’ and evolution hadn’t removed all of the hair yet. I’m reminded of the many verses that tell parents—actually, most instances in the Bible say ‘fathers’—to train their children. ‘Train your children in the ways of the Lord.’” Carl added that this is why AiG’s future museum near Cincinnati will be so important in equipping families with biblical truths.

We know, by the way, that the president of The Field Museum is aware of the Creation Museum being built just a five-hour drive away from his temple of evolution. See his comment in the sidebar about how science museums are now more motivated to defend evolution vigorously.

This massive exhibition at The Field Museum joins the ranks of other science museums in an increasingly intensive effort to indoctrinate hundreds of thousands of visitors each year in a belief in molecules-to-man evolution. New York City’s American Museum of Natural History has a similarly large exhibition (called Darwin) that runs through May, and then goes on the road to other cities (including Chicago) to reach even more Americans with the evolution message (see “A Review of the New Darwin Exhibition at the American Museum of Natural History).” 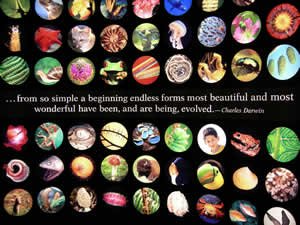 The Field Museum is a temple to evolutionary belief. In its new $17 million Evolving Planet exhibit, the museum’s last display is something of a doxology to Mother Nature and Charles Darwin.

The cost to design and build AiG’s new planetarium, several high-tech displays and a large special effects theater will not come near the $17 million spent on Evolving Planet,5 with exhibits that will take up even more space than the 27,000 square feet at Evolving Planet. (And it won’t cost $27 to visit, which is what museum parking and admission are at The Field Museum.)6

What’s more important, though, than comparing the Creation Museum to a new exhibit at The Field Museum is that visitors to the Creation Museum will be challenged with the life-changing message that God’s Word is true—most importantly, that its gospel message is true. Museums like the Field have a life-undermining message: that people are just the result of random processes over billions of years. Where is a sense of purpose and meaning in a story like that? Thankfully, there will be a museum opening near Cincinnati, Ohio, next spring that will have a positive story to share: the Bible is the true history of the Creator’s designed universe, and He has not created human beings without meaning or purpose.

(Note: A more detailed critique of Evolving Planet will eventually be posted to this website, so please check back. Because this new exhibition at The Field Museum is so full of evolutionary displays and text, it would take a book-length reply to refute all of it. In a future article, we will highlight the main areas of evolutionary propaganda found in the museum that need refuting, for they are presented so convincingly to the unwary visitor—and because they are also themes often found in other museums.)