The first exoplanet, a planet orbiting a star other than the sun, was discovered in 1992. In the intervening three decades, astronomers have found more than 4,000 exoplanets. Most exoplanets are discovered by the dimming they produce as they transit, or pass in front of, the stars they orbit. This has been the technique used by the two earth satellites that have searched for exoplanets, Kepler (2009–2018) and the Transiting Exoplanet Survey Satellite (TESS) (launched 2018). Exoplanet discoveries have created many firsts and other records, such as the largest and smallest exoplanets, and the exoplanets that orbit closest or farthest from their host stars. Now astronomers have announced another first—an exoplanet found in another galaxy.1

The new exoplanet is called M51-ULS-1b. It orbits an X-ray source called M51-ULS-1. What do these names mean? M51 is the name of the galaxy in which the X-ray source is located. The M is an abbreviation of Messier, for Charles Messier (1730–1817), a French astronomer who looked for comets. Messier kept stumbling across star clusters, nebulae, and galaxies that superficially resembled comets and hence hindered his searches for comets. So that Messier could quickly identify and eliminate these faux comets from his searches, he assembled a catalog of a little more than 100 such objects. M51 is the 51st entry in Messier’s catalog. M51, which from its appearance is also called the Whirlpool galaxy, is about 30 million light-years away. The ULS stands for ultraluminous supersoft source, a classification of X-ray objects. The number 1 refers to this X-ray source being the first ULS discovered in M51. The names given to exoplanets are the names of the stars they orbit, with a lower-case Latin letter attached to the end. The first planet discovered orbiting a star is given the letter b, with additional planet discoveries given sequential letters.

Like many X-ray sources, M51-ULS-1 is a close binary star, with one of the component stars being a compact object. Compact objects are either neutron stars or black holes. 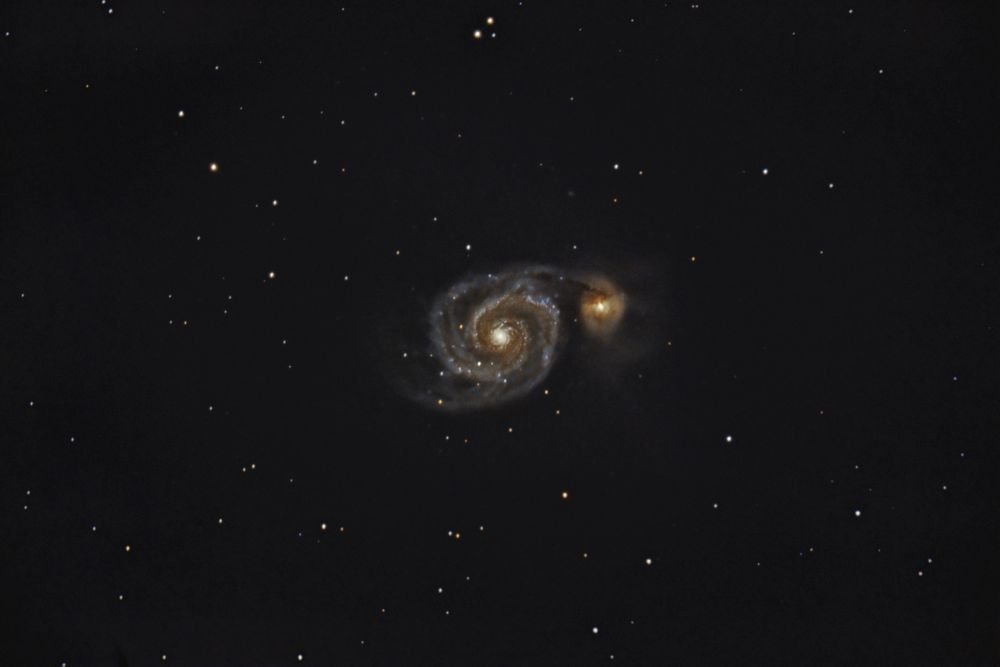 How Did They Find It?

While the companion stars of X-ray binaries sometimes are too faint to be visible, as in the case of M51-ULS-1, the copious X-rays from the accretion disks are not. The earth’s atmosphere blocks all X-rays, preventing them from reaching the ground, so astronomers must rely upon X-ray telescopes in space to study X-ray binaries. The team of astronomers that discovered M51-ULS-1b used the orbiting Chandra X-Ray Observatory (CXO). They found that all X-rays from M51-ULS-1 rapidly disappeared and remained absent for three hours before rapidly reappearing. After considering and eliminating all other possibilities, the team determined that the only possible explanation was that an object approximately ten times the size of earth (about the diameter of Saturn) had passed in front of M51-ULS-1. This is the size of a large planet, so the best explanation is that the X-ray binary is orbited by a planet this size. Since the planet is larger than the X-ray source, the blockage of the X-rays is more technically called an occultation rather than a transit. This is a first in exoplanet discoveries too. The orbital period of the planet probably is several decades, perhaps 70 years, so direct confirmation by observing another occultation of this exoplanet will await another generation of astronomers.

Since the planet is larger than the X-ray source, the blockage of the X-rays is more technically called an occultation rather than a transit.

How significant is this discovery? Other than being a first, it is probably not very significant. Now that this new technique of exoplanet discovery has been pioneered, new extragalactic exoplanets are sure to follow. M51-ULS-1b is not even the first exoplanet known to orbit a compact object, for there are at least nine confirmed pulsar planets, exoplanets orbiting pulsars (neutron stars detected via their pulsed emissions due to their rapid rotation). In fact, the first two confirmed exoplanets in 1992 were pulsar planets. So far, there are no known exoplanets orbiting black holes. Since we don’t yet know which type of compact object M51-ULS-1 contains, it could be the first blanet, the term coined for hypothetical planets that may orbit black holes.

Interesting, but What Does It Mean?

The primary purpose of searching for exoplanets is to find places where life could exist. Might M51-ULS-1b support life? We know nothing of the conditions on the planet, but we can make some good inferences. Because planets the size of M51-ULS-1b tend to have the wrong atmospheres, they are not considered to be hospitable to life (but, as we shall see in a moment, it may not even have an atmosphere). What if there were an earth-size object orbiting M51-ULS-1b? Might it be suitable for life? If the companion star of the compact object is bright enough, the earth-sized object might be in the habitable zone of the star. However, astronomers think the compact object formed from an explosion of a supernova. M51-ULS-1b and any objects orbiting it probably are far enough from the binary star to have survived the explosion, but they undoubtedly would have suffered damage from this catastrophic eruption. If there were an earth-sized object orbiting M51-ULS-1b, the supernova explosion likely would have stripped its atmosphere. Even if any atmosphere survived, the strong X-ray emission from the accretion disk that formed around the compact object after the supernova event would have finished the job of stripping the atmosphere. The same is likely true of M51-ULS-1b as well.

We at Answers in Genesis are not surprised that astronomers have failed to find any earth-like planets. From Scripture we understand that God took special care in preparing the earth for life and then created life on earth. Since God’s focus is centered on mankind, we don’t think God created life elsewhere, so there is no need for God to have made other earth-like planets. The search for exoplanets has borne out this prediction of the creation model. M51-ULS-1b is just one of the extreme examples of how exoplanets cannot support life.