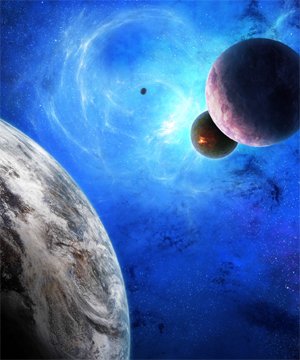 See Cosmos: A SpaceTime Odyssey for reviews of other episodes and discussion guides for further study.

The 13-part series Cosmos: A SpaceTime Odyssey completed its TV run a few weeks ago, but it will undoubtedly pop up in countless science classrooms this fall and in coming years. Producers claimed their goal was to promote scientific literacy. But did they have other motivations?

Gregarious host Neil deGrasse Tyson contended, “The whole point of telling these stories is to allow you to understand that science, the scientific method, is central to all of our lives.”1 But executive producer Seth MacFarlane offered an additional observation: “I think that there is a hunger for science and knowing about science and understanding of science that hasn’t really been fed in the past two decades. We’ve had a resurgence of creationism and intelligent design quote-unquote theory. There’s been a real vacuum when it comes to science education.”2

Aired on several U.S. TV networks, such as Fox and the National Geographic Channel, and networks in 70 other nations, Cosmos boasted the biggest global launch for a TV series ever. Hundreds of millions of viewers were presented with a one-sided view of evolution, both its cosmological and biological varieties. The series was intended to update the hugely popular Carl Sagan series of 1980, which made famous the quote, “The cosmos is all that is or was or ever will be.”

The attack on biblical Christianity did not end with the airing of the last episode. As with the original Cosmos, these 13 hours of videos will be shown to millions of students in science classrooms worldwide. Most, wowed by the program’s special effects and its confident host, will uncritically accept astronomical myths such as the big bang and the Oort cloud.

Far from promoting true scientific literacy, Cosmos pushes students to reject the Designer of the cosmos and accept a universe that came about through mindless, purposeless, and naturalistic processes.

The Religious Philosophy Behind Cosmos: Quotes from Neil deGrasse Tyson

“Evolution really happened. Accepting our kinship with all life on Earth is not only solid science, in my view, it’s also a soaring spiritual experience.”

“So you’re made from detritus [of exploded stars]. Get over it . . . . After all, what nobler thought can one cherish than that the universe lives within us all?”

“God is an ever receding pocket of scientific ignorance.”

Next Article The Costly Exercise of Religion