A new film, Sirius, about a mummy from space, sounds like the usual summer escapist science fiction, except that this film is . . . well . . . serious. The film uses Ata, an actual six-inch mummy with a bulb-shaped head, to try to prove that extraterrestrials have visited earth.*

Both the X-rays and simple visual examination of Ata, however, are consistent with a miscarried human baby, not an alien or a missing link or even a new species. Ata is most likely a fetus that suffered from mutations, leading to abnormalities of the skull. He is not a product of extraterrestrial evolution. Yet the film’s narrator declares that Ata could be a missing evolutionary link. 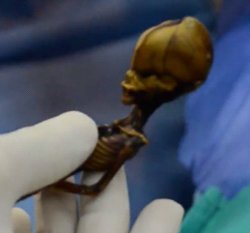 Despite claims he came from space, Ata is simply a miscarried human baby.

Sirius goes on to make the claim that suppressed extraterrestrial technology could solve the world’s ills virtually overnight. Such Hollywood hyperbole merely exposes the desperate search for an alternative savior by some people whose evolutionary bias has robbed them of any real hope. After all, their reasoning goes, since life evolved on earth, it could have happened elsewhere in the universe, and maybe someone out there has solved the problems we face.

Someone has—the Creator of the universe, who sent His Son to die and conquer death. His name is not Ata, but those who trust Him are privileged to call Him Abba, Father, and to rest in His promise of full and eternal salvation.