Phil Plait is an astronomer best known for his website, Bad Astronomy. He also has a book by the same name. Plait blogged about some of Ken Ham’s recent tweets. However, Plait began his essay with some comments about the debate between Bill Nye and Ken Ham two years ago (I’ll say more about this later).

Plait’s essay had the provocative title, “Ken Ham Really Doesn’t Understand Science.” At the outset, let me say that Ken studied science education at a university, and he taught science in public schools in Australia before beginning full-time work in creation ministry. As a former science educator, Ken has some knowledge of science, but he does not, nor has he ever, called himself a scientist. From personal experience I can attest that Ken relies upon scientists, such as myself, to assist him in understanding many of the complex questions that come up. I appreciate that about Ken. I also have found that Ken has far more understanding of science than Plait gives him credit for.

The first item that Plait discussed was the rate of lunar recession. Astronomers directly measure the changing distance of the moon by timing how long it takes a laser beam to travel to the moon, reflect off special mirrors left on the lunar surface by Apollo astronauts, and then return to earth. The moon is receding by nearly four centimeters per year. That isn’t much, but it adds up over millions of years, if the moon and earth have been orbiting one another for that long. Furthermore, the rate of recession would have been much greater in the past when the earth and moon were closer together. We understand the physical mechanism of how this works, and hence the functional dependence over time. We can take the current measured distance to the moon and the current measured rate of lunar recession along with the equation that describes the process to compute how far away the moon would have been in the past. The result is that the earth and moon would have been in contact about 1.3 billion years ago. This is far less than the supposed 4.5 billion year age of the earth-moon system, so this would seem to preclude an age nearly this old.

The moon is receding by nearly four centimeters per year.

Third, Plait took on Ken’s comment about the fact that spiral galaxies ought not to exist if they are billions of years old. Since objects in galaxies orbit differentially, spiral patterns ought to smear out in far less time than the supposed ages of galaxies. This is called the winding problem, and, as Plait sort of referred to, astronomers have been aware of this problem for nearly a century. There have been a number of solutions proposed for this problem. Sixty years ago the solution was that magnetic fields constrained spiral structure. The failure of that theory led to spiral density wave theory fifty years ago. According to the spiral density wave theory, spiral arms are density enhancements in the interstellar medium, sort of like sound waves. The sound waves move at a different speed than the orbital motion of objects in the galaxy. This is why clouds of gas and dust are found along the spiral arms. The density wave is alleged to trigger star formation, which is why hot, bright, and presumably young stars are found along spiral arms. Plait referred to a video of himself explaining this. 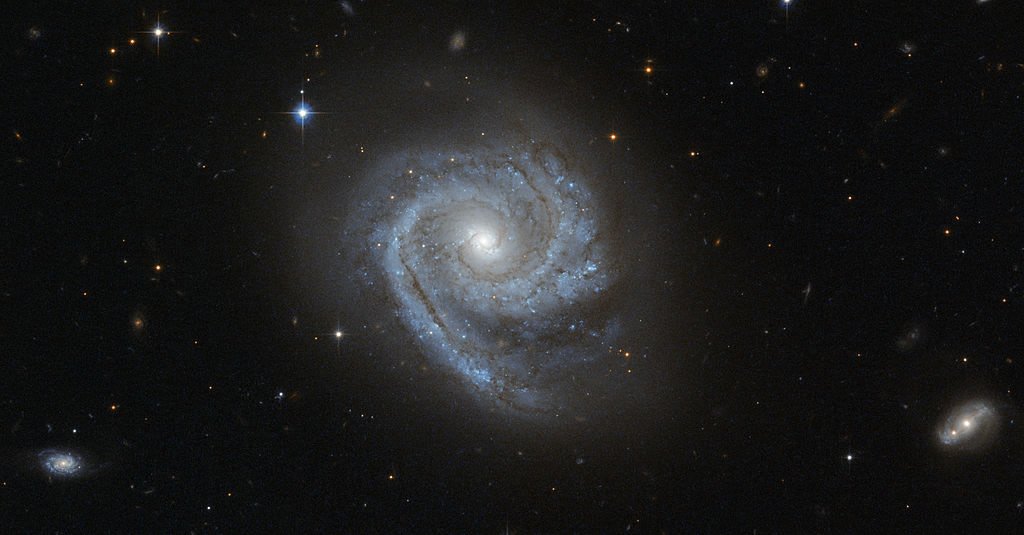 There appears to be much hand waving in spiral density wave theory. Astronomers generally accept the theory, primarily because it solves the winding problem for spiral galaxies, so there isn’t much interest in determining whether the theory actually works. In recent years, there has been some tweaking of the model. For a while it was thought that gravitational perturbations of companion galaxies helped stir up spiral arms. Now dark matter halos thought to surround most galaxies are being invoked as important factors. These add-ons amount to a tacit admission that spiral density wave theory isn’t all that it’s cracked up to be.

Finally, Plait responded to three tweets that Ken made about the big bang. Here is the first of Ken’s tweets:

Plait objected to the use of the word pagan, terming its use as “odd,” and he said that it “refers to a religion that’s not one of the world’s main religions.” There are several related meanings for the word pagan, but this is one that I’ve never heard, and none of my dictionaries support it. One common definition of pagan is non-Christian. Another accepted definition is an irreligious person; another is a person with little or no religion. The big bang, at least as promulgated by the likes of Stephen Hawking and Lawrence Krauss, is atheistic, and hence can be termed as being pagan. Furthermore, atheism is a belief system about God (that He doesn’t exist), and since it makes a metaphysical assertion, it amounts to a form of religion. Next, Plait commented on another of Ken’s tweets:

The Big Bang is not a belief or a religion. It’s actually a model of how the Universe began, or more accurately what happened in the teeniest tiniest fraction of a second after the Universe began. And it’s supported by a vast amount of observational and theoretical evidence. No faith is needed.

The big bang is the modern, ultimate creation myth. As such, it makes a metaphysical statement, which certainly qualifies it as religious dogma. The fact that its supporters dress it up in scientific-sounding clothing doesn’t change that. Of course, to those, such as Plait, who are totally immersed in that belief system, it doesn’t appear as such. Lest anyone doubt my comment about the big bang being dogma, consider that some astronomers who dared question it, such as Halton Arp and Sir Fred Hoyle, received some shabby treatment from the scientific establishment.

The Big Bang belief (part of the evolutionary religion) conflicts with the Bible’s [clear] teaching [that] the earth was created before the sun.

Plait wrote several things here, but his main complaint seems to be that the big bang supposedly happened nearly ten billion years before the earth or the sun, so the big bang doesn’t have anything to do with the earth or the sun. This is true, and sometimes I see this confusion among creationists, that the big bang is an origin scenario for the origin of the solar system. However, Ken did not actually say this; perhaps Plait was reading into Ken’s tweet what others have said. Keep in mind that this was a tweet, which is limited to 140 characters (and this tweet was at that limit). One certainly can’t give full discussion of any topic in such a short format (imagine Plait’s comments on Ken Ham’s tweets if they were on Twitter instead of a blog). The big bang is part of the evolutionary belief system, which also includes a theory of how the solar system, including the earth and sun, formed. That is what Ken was referring to.

Plait included this near his conclusion:

I’ve said this before, but it bears repeating: I think that people have the right to believe what they want. But when that belief clearly contradicts what we know to be true due to our observations of the Universe, and someone is vocal about it, well, we’re going to have a problem.

Would Plait hurl this same sort of charge against others who oppose the dogma of the big bang, such as the hundreds of people who have signed the Cosmology Statement? Or is this sort of attitude reserved only for Bible-believing Christians?

Plait responded to tweets, brief pithy statements. It would have been much better if Plait had dealt with some of the much more in-depth articles that creationists have written, rather than attempting to refute a series of tweets on various subjects.

Every time that Bill Nye mentioned something about astronomy during the debate two years ago, he got things wrong.

It is interesting that Plait began his essay with a mention of Bill Nye. Plait referred to him as “popular science communicator Bill Nye” rather than scientist. I’m glad to see that Plait got this right; far too often Bill Nye is considered to be a scientist when all he did was play one on television. As I have previously discussed, every time that Bill Nye mentioned something about astronomy during the debate two years ago, he got things wrong. I’m not aware that anyone else has pointed this out. I wonder why Plait hasn’t talked about this.