Sharks: Denizens of the Deep

Sharks come in all shapes and sizes, from the bizarre-looking hammerhead shark, with its eyes at either end of a double hammer-shaped head, to the angel shark, which has ray-like 'wings'.

Sharks. Few creatures alive today incite more fear and awe than these fierce marine predators, gliding through the ocean with their powerful bodies, black eyes and rows of razor-sharp teeth.

When most people, particularly those in Australia, think of sharks, they think of the terrifying Great White. This shark has a fearsome reputation, and not just because of sensational Hollywood movies like Jaws and, more recently, Deep Blue Sea.

Tragically, one hears each year of fatal shark attacks on humans, often in the waters of popular beaches. Whenever such a shocking event occurs, discussion springs up as to whether or not Great Whites, which generally feed on seals, turtles and large fish, have turned to hunting humans, or those humans just happened to be in the wrong place at the wrong time.

But there are many types of sharks other than the Great White, about 250 in fact, with only 27 of those implicated in attacks on people or boats.1 Interestingly, the largest known sharks today are relatively harmless to man. The basking shark and whale shark, which grow to 12 and 18m (40 and 60 feet) respectively, eat only minute plankton and schools of small fish.1 Almost all other sharks prey on smaller sharks, fish, squid, octopus and shellfish.

With the sea a boiling cauldron, this Great White launches from the water like a torpedo, holding fast the remains of a seal in its terrifying jaws. Though ferocious predators, these sharks are not as indiscriminate in their feeding habits as such images might suggest. 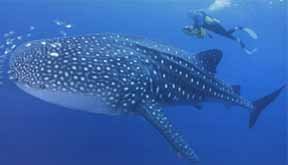 In today's fallen world, most sharks perform a valuable function in the ocean's 'chain of life' as scavengers and/or top predators. This whale shark (above), although much larger (up to 18m (60 feet) long) than a Great White, is no threat to humans, seals, etc. as it feeds on mostly plankton. It gives us a glimpse of what a pre-Fall world might have been like.

For intensive discussion on the issue of predators and the Fall after Adam's sin, see The Answers Book (new, revised, expanded) Chapter 6.

Sharks come in all shapes and sizes, from the bizarre-looking hammerhead shark, with its eyes at either end of a double hammer-shaped head, to the angel shark, which has ray-like 'wings'.

All sharks have incredible design features suiting their diet and environment. Those that feed near the surface, like the mako and thresher sharks, are beautifully streamlined and powerful swimmers, allowing them to catch and feed on fast tuna and marlin. Bottom-feeding species, like the above-mentioned whale shark, are stout, blunt-headed and are more sluggish, while shellfish-eaters have coarse, pavement-like crushing teeth.2

Sharks are among the ocean's cartilaginous fishes (class Chondrichthyes); that is, those fishes that have a skeleton made of cartilage, rather than being 'bony', and have tooth-like scales (denticles) on their skin.

The young in most species hatch from eggs within the female and are born alive.2 Sharks have five to seven gill clefts each side, and most have an opening behind each eye, called a spiracle, which also acts as a gill.

Incredibly efficient predators, sharks are able to locate prey and their own kind, but limited research on live sharks means their methods of doing so remain 'imperfectly understood'. While they are able to distinguish moving objects visually, they primarily use their very acute sense of smell to locate food they can detect less than one part per million of blood in the water.3

Teeth in sharks are arranged in rows in the mouth, but are not firmly attached to the jaws. Instead they are imbedded in a fibrous membrane lying over the jaws. When a tooth becomes broken, worn or lost, it is replaced by one moving forward from the next row behind.

These marine creatures are also perfectly designed to live in their saltwater environment. Most marine vertebrates maintain lower concentrations of salts and other chemicals in their blood than are found in seawater. As such, they face a continuous problem of water loss to the environment, as water tends to move from low to high salt concentration regions (via membranes) a process called osmosis. However, sharks, like other cartilaginous fishes, can reabsorb most of their nitrogenous waste products and store them in their tissues and blood. Called 'urea retention', this process ensures that the concentration within the body exceeds that of the surrounding seawater, and water moves into the body without using any of the shark's precious energy.4

Scientists say that 'the evolutionary origin' of the shark is 'obscure', but state with 'authority' that its geological record goes back to the Devonian Period (supposedly 408 to 360 million years ago).

Sharks are yet another group of creatures often referred to as 'living fossils' because it appears they have not changed a great deal from those that swam the seas supposedly 100 million years ago.2 The New Encyclopaedia Britannica says 'modern sharks' appeared in the Early Jurassic Period [supposedly 100 million years ago] and 'overall, evolution has modified the shark morphology very little, except to improve their feeding and swimming mechanisms'.2

Statements about shark evolution are based on the most part on assumptions made from studying fossilized shark teeth. Other forms of shark fossils are almost non-existent because cartilaginous remains do not fossilize like bones. Shark teeth, however, are covered with hard enamel, and fossilize well, and from what has been found in the fossil record, 'ancient' cartilaginous fishes were little different from those today.5

In fact, evolutionists have no idea how sharks 'evolved', either in their own class or in the broader scheme of marine evolution. They say bony and cartilaginous fishes evolved independently, 'although the lines of evolution remain to be discovered'.4

What the fossil record does show is that enormous sharks once inhabited our oceans.

What the fossil record does show is that enormous sharks once inhabited our oceans. The largest known carnivorous fish to have inhabited the sea is the Carcharodon megalodon. Based on the discovery of huge fossil teeth, scientists believe the megalodon (which means giant tooth) was a huge shark that could have been up to 17m (60 feet) or longer (nearly twice as long as a Great White).

These giant teeth are up to 17cm (6.5 inches) long, the size of a person's hand. Recent research has suggested that their similarity to the Great White's teeth may be more superficial than previously thought, and the two species may have differed considerably in their attack behaviour.6

Massive jaws of megalodon, probably the largest shark ever to exist in our oceans. Since cartilaginous skeletons do not readily fossilize, the main pointers to its existence come from teeth and a few vertebrae.

Megalodon shown to scale with a modern bus and a Great White compared to an average-sized man. Several alleged eyewitness sightings of enormous sharks over the years suggest these colossal creatures may still inhabit our ocean depths. This would sit comfortably with the Bible, but less so with evolutionary ideas.

This creature is generally referred to as a 'prehistoric' relative of the Great White, and assumptions about its appearance are based on this link. Although it reportedly existed between 25 million and 1.6 million years ago, scientists describe it very much as a 'modern' shark.7

Photo of a decomposing basking shark carcass on a New Zealand beach (right). The unique pattern of decomposition of such carcasses often leaves a small 'head' and narrow 'neck'. This gives them a 'plesiosaur-like' appearance that has misled several creationists, as well as evolutionary cryptozoologists.9

Vito Bertucci, a diver who reportedly spent 20 years acquiring an entire set of megalodon teeth (182 teeth), has reconstructed what are considered to be the ocean's biggest jaws.8 It is believed these jaws could open 1.8m (six feet) wide and 2.1m (seven feet) high.

Sharks may have been generally larger in the past, as were many other types of creatures, according to the fossil record. There is nothing about the teeth of the megalodon to indicate it was anything other than a shark, even though it supposedly existed up to 20 million years ago. The fossil record is clearly consistent with the fact that sharks have always been sharks, and have not evolved from non-sharks.