The Dark Side of Nature

Nature isn’t all peace and beauty. But even the dark side of creation can tell us something about God’s grace.

The atheist blogger lustily ripped apart the Christian faith as he described a pride of lions pouncing onto a badger from different sides, clamping steely jaws on its flesh, and playing a cruel game of tug of war. The badger’s interminable screaming went uninterrupted for more than 30 minutes. The atheist chastised Christians for believing in a “supposed good god” who would create this chaos of suffering in the animal kingdom.

How would you respond to this challenge?

As much as we love to sing about our loving Father’s creation (and I’m usually the loudest), is it possible we forget the truth of nature’s dark side? Though I love experiencing and writing about God’s creation, I am painfully aware of nagging reminders of tragedy that will simply not go away. I know wonderful things about God’s amazing creatures, but I’ve also seen enough in the wild to know that the earth groans with pain and death (Romans 8:22).

Consider Flipper, the beloved dolphin from the television show of my youth (which was made into a movie in the ’90s). Did you know his relatives kill their own babies, just so a mother will mate again? Do I really want to admit that adorable-looking sea otters drown seal pups? I hesitate to reveal the cruelty of male chimpanzees as they kill, dismember, and eat babies in front of the baby’s mother! And what’s going on with the elephants? They are increasingly attacking and destroying villages in African preserves, even assaulting and killing rhinos.

Why is this happening? Some suggest that this cruel behavior might be caused by increasing animal anxiety stemming from human poaching, human-caused habitat loss that decreases roaming space, and dwindling numbers of mating partners in populations. Some of these explanations may be true in certain instances.

But then I’m reminded of joys I’ve experienced in the forest that are marred by dark reality. Many times I have stopped to admire the beauty of a cowbird, with its noble brown head, lovely against the backdrop of its ebony feathered body. The beauty of this bird reminds me of God’s glory. Then I consider how the cowbird’s mother laid her egg in the nest of another mother bird of a different species. She had no intention of raising it and abandoned it to the care of the clueless foster mother. As it grew, the cowbird most likely shoved its foster siblings out of the nest to their death so it could be the sole heir of that brood. That is the norm for cowbirds.

As a Christ follower and lover of his creatures, I hate admitting that there is something horribly wrong with creation. But I have learned that we must all come to grips with that knowledge if we are to properly understand God’s work in its fullness and explain it to nonbelievers who readily see all these flaws. To benefit from the really good news that Jesus Christ has for us, we cannot hide the heart-wrenching bad news in all of its pain, tragedy, and death. We must face it head-on.

God did not originally create this horrific situation. We did. It was our rebellion against the only one who is truly good that resulted in God cursing this world with suffering and death. For when he originally created this world and its creatures, all was well. The first two people, Adam and Eve, were at peace with God and one another; creatures were at peace in creation; and God declared his creation “very good” (Genesis 1).

So why are Christians, like so many others, drawn to a peaceful and harmonious view of nature? Is it based on a longing in the depths of our souls for a time when peace, harmony, and loving relationships were once reality? Or do we instinctively deny reality to avoid uncomfortable doubts that God is good? When bad things happen in nature, do we fall back on the story that God has always used the death and suffering of evolutionary processes to create and sustain life on earth?

Once we face the fact that not evolution but our declared independence from God brought this suffering into our once “very good” creation, Jesus provides the most wonderful news in the midst of this brokenness. He tells us that God is good and desires to restore relationships among all people through the death and resurrection of the Creator, Christ (Psalm 100:5; Acts 13:38–39).

We have the promised hope that one day the Lamb of God will restore peace between himself and his people, peace among his people, and peace in creation itself as “the wolf and the lamb shall graze together; the lion shall eat straw like the ox, and dust shall be the serpent’s food. They shall not hurt or destroy in all my holy mountain” (Isaiah 65:25).

That’s the perspective we should understand and embrace, based on Genesis, if we want to point atheists to the flawless light of the gospel.

Tom Hennigan is associate professor of biology at Truett-McConnell University, where he teaches organism biology and ecology. He is coauthor of the newest edition of the Wonders of Creation series, The Ecology Book. 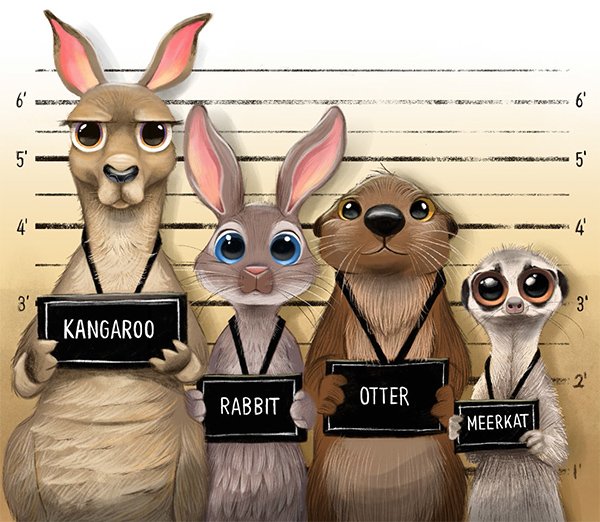 Kangaroo—Putting the “Roo” in “Emergency Room”

Despite their warm and cuddly appearance, kangaroos are not pushovers. Kangaroos have been known to lure predators into water and hold them under the surface to drown them. If no water is nearby, they might try to claw out their attacker’s eyes. In further gruesome tactics, they use their powerful back legs and sharp claws to disembowel a creature—or a human. In short, these intense Australian natives put the “roo” in “emergency room.”

Rabbit—Worst Mother of the Year Award Goes to . . .

Mother rabbits (called does) give new meaning to the phrase “I could just eat you up.” If a doe becomes frightened or stressed, she might eat her litter of babies, hoping to hide the traces of the vulnerable newborns from a predator, and save herself to start over with a new litter. Other times, if she fears that her whole litter or just one bunny would not survive, she starts chowing down.

Sea Otter—Cute Is as Cute Does

For most of us, otters epitomize carefree playfulness and cuteness. But for seal pups, otters inspire terror. Male sea otters have been known to assault seal pups, often fatally wounding them in the process. And they don’t stop there. Some otters drag the dead body around for up to a week, continuing to assault it. Still think they’re cute?

At first glance, a meerkat colony appears altruistic, with individuals working together for each other’s good. But all is not tidy in this matriarchal mammal group. Meerkats have been called the most “murderous” mammals, with almost 20% of their deaths caused by other meerkats. Their specialty? Infanticide. When a larger, dominant female gets pregnant, the war begins as she murders the other females’ pups. And that’s not all. She proceeds to harass the other females, raising their stress hormones which makes them infertile. The subservient females then help to raise her pups.

Previous Article Cloudy with a Chance of Confusion