How do bees know which flowers to visit to load up on nectar? Which flowers have already been plundered? A team from the UK’s University of Bristol believes the attraction is electrical.

Bees’ wings generate a positive electrical charge. Because flowers normally carry a negative charge, the bees’ positive charge helps pollen stick to the little hairs on their bodies. Visits from nectar-seeking bees, in the study, made the charge on petunias temporarily less negative. (See the illustration.) Could this alteration in charge mark certain flowers as “already-harvested” for bees?

To confirm this, the bees were re-released after the charge was turned off. Their visits became completely random, suggesting the bees had indeed been following flower power to find their sweets.

Insects have never before been documented to possess electrical sensitivity. “We think bumblebees are using this ability to perceive electrical fields to determine if flowers were recently visited by other bumblebees and are therefore worth visiting,” says the team’s leader, biologist Daniel Robert. “The last thing a flower wants is to attract a bee and then fail to provide nectar,” he says. “Bees are good learners and would soon lose interest in such [an] unrewarding flower.”1 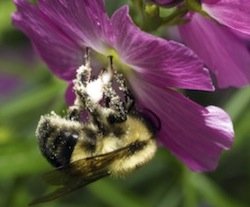 Pollen is attracted to the hairs on this bee’s body. The bee generates a positive charge by rapidly moving its wings. The flower is negatively charged, so the pollen sticks thanks to static. Image by iStockphoto/Thinkstock, via Science.2 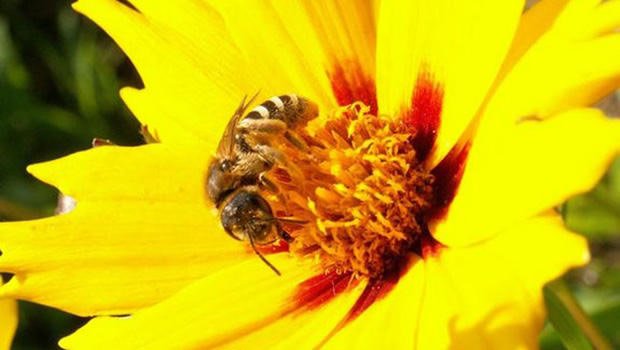 How does this bee know that this flower’s nectar hasn’t already been gathered? Her efficiency is apparently increased by her ability to detect the electrical footprint of previous visitors, guiding her to devote her time to more promising targets. Image by stock.xchng Bees, via CBS News.3

As a bumblebee visits this petunia, the graph shows the change in electrical potential measured in the flower’s stem. (1) The flower initially has a fairly negative charge. (2) The flower acquires a slightly more positive charge as the bee approaches and (3) gathers nectar. (4) The change in electrical potential “both precedes and outlasts the presence of the bee on the flower.” (Image and quotation from the video by Dominic Clarke et al. accompanying the online Science article “Detection and Learning of Floral Electric Fields by Bumblebees.”4 Be sure to watch the entire video available online.)

The team isn’t sure how bees detect the charge difference but think it may involve how much the hairs on their bodies bristle up. “Animals are just constantly surprising us as to how good their senses are,” says lead author Dominic Clarke. “More and more we're starting to see that nature's senses are almost as good as they could possibly be.”5

Noting that electrical patterns change more quickly than other sensory cues, the authors write, “The ubiquity of electric fields in nature and their integration into the bees’ sensory ecology suggest that E-fields play a thus far unappreciated role in plant-insect interactions. The present study raises the possibility of reciprocal information transfer between plants and pollinators at time scales of milliseconds to seconds, much faster than previously described alterations in floral scent, color or humidity.”6

So how did bees acquire this amazing ability?7 Pollination is good for both bees and flowers, so evolutionists typically assume such mutually beneficial symbiotic relationships are a product of co-evolution.8 Yet nothing inherent in this highly responsive design suggests that evolution produced it.

Biblically we know that plants were created on the third day of Creation Week about 6,000 years ago and the flying animals that pollinate many of them just 2 days later. God created plants and animals able to reproduce successfully, so we can conclude He created them with these symbiotic relationships, or with the ability to adapt to form them. It has taken mankind 6,000 years to discover it, but now we know one way that God equipped bees to efficiently provide for their own nourishment and to produce honey, a food valued and enjoyed by humans from antiquity.

Previous Article How a Multitude of Homing Pigeons Vanished Next Article News to Note, March 2, 2013