What Doesn’t Animal Behavior Tell Us?

The Scientist recently summed up the latest studies of animal behavior, doubtless leaving some again asking what clever animal behavior tells us. In addition to a report on the hazardous flying conditions cell towers create for migratory fowl, the article provides several cases with clear anthropomorphic appeal.

A chimpanzee named Santino at Sweden’s Furuvik Zoo has been the subject of controversy since he first made headlines in 2009 for stockpiling rocks “to pelt zoo visitors who appeared to agitate him—strong evidence that nonhuman animals could plan ahead. But skeptics argued that Santino wasn’t necessarily planning ahead, and was instead repeating previously learned responses to the zoo visitors.” 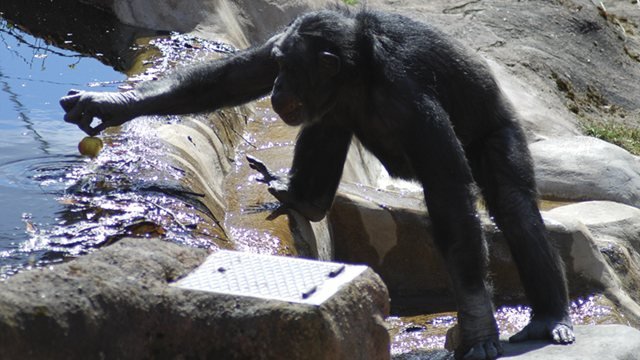 After casually sauntering within range of zoo visitors while concealing pebbles in his left hand, Santino the chimp plucks an apple from the moat as he prepares to pelt his unsuspecting targets. He launched his missiles 15 seconds after the photo was taken. Image from PLOS ONE, Tomas Persson.

A new study describes “how Santino has now begun to conceal the stones under heaps of hay and behind logs, deliberately and deceptively concealing his ammunition so as to get a closer aim at his targets.” These new tactical abilities suggest “Santino anticipates and plans for a future situation rather than simply responding repetitively to a past one.”

“Do the results imply that the chimpanzee possesses a theory of mind?” the researchers ask. “Mind reading is characterized as reasoning about what is not overt in behavior,”1 seemingly anticipating future behavior by the visitors. In other words, does Santino have a concept that people are thinking about annoying him? 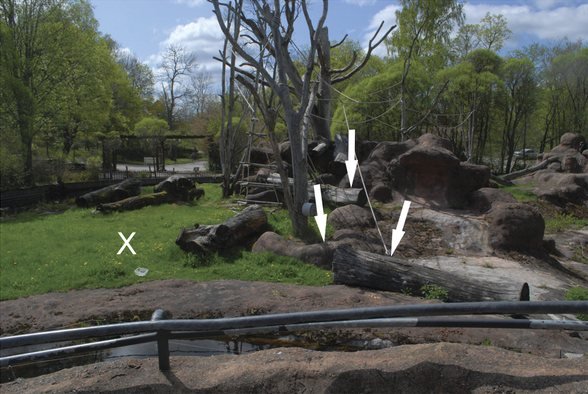 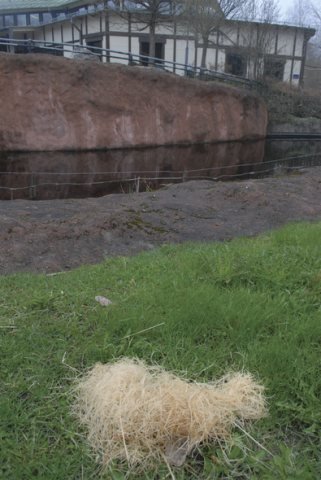 Haystack (which was located at the “X”) and other concealments on the chimpanzee island where Santino hid his ammunition. Note the rock hidden under the haystack. Images from PLOS ONE.

The Lund University authors consider Santino’s premeditated deceptive skills an example of co-evolution since “It has been suggested that human planning skills evolved in response to an increasingly complex social environment.”2 Furthermore, the authors note, “In humans, foresight, memory, and the taking of others’ viewpoints all seem to be supported by a common brain network. The relevant brain structures appear to be largely shared with chimpanzees.”3

Another study in The Scientist’s behavior round-up includes a Portuguese study confirming dogs, like people, “catch” the yawns of others.

Another study in The Scientist’s behavior round-up includes a Portuguese study confirming dogs, like people, “catch” the yawns of others. Dogs don’t have to see their owners yawning. Just hearing its owner yawn is enough to set off a doggie yawn. “Canines yawned five times more often when they heard humans they knew yawning as opposed to control sounds, such as a stranger yawning or a computer-produced sound. Contagious yawning has also been observed in baboons, macaques, and chimpanzees.” The authors of the study published in Animal Cognition, noting that a 2011 study found humans catch yawns more easily from their friends,4 consider their findings evidence that dogs can emotionally empathize with their human owners.

Still another study shares the syntactical skills of the rock hyrax. The rock hyrax, also known as a coney or rock badger, is native to the Middle East and known to Bible readers from Proverbs 30:26, a verse describing its native habitat. The hyrax is a very musical animal, and analysis of its songs has shown a sophisticated syntax in which the order of the notes varies and seems to have meaning.

Dr. Arik Kershenbaum of Israel’s University of Haifa says, “A typical hyrax song can last for several minutes, and their songs are broken down into small bouts, with each bout lasting for maybe 10 to 20 seconds. Each bout is composed of a number of notes, which we call the syllables. There are only a very small number of syllables that make up a hyrax song, and each sound is very distinct. And out of these, you can make up a whole language and combine them in an infinite number of ways.”5 Different regions seemed to have regional dialects. Kershenbaum does not, however, ascribe the human ability to encode information to the hyrax. He simply considers the hyrax to be a social mammal that signals or advertises itself to other hyraxes as birds do with their songs. In fact, you can listen to a hyrax’s solo performance with a background bird concerto at the article.

In April we reported on a conference where scientists focused on the need to find alternative explanations for apparent animal cognition. Many people just enjoy anthropomorphizing animal behavior. As Dr. Clive Wynne, a psychology professor from the University of Florida–Gainesville recently observed, “Human beings have a very natural tendency to project human agency into almost anything that moves. It’s very deeply ingrained into our ways of trying to understand the world around us.”6 But Dr. Wynne believes we are in error when we use these impressions in “trying to understand animal behaviour.”7

We believe those who attribute clever behavior in chimps like Santino to co-evolution with humans to be equally in error. The animal world is full of interesting observable behaviors, and we have a tendency sometimes to interpret those behaviors as if the animal were able to think and reason abstractly the way humans do. Particularly in the case of apes, however, reports of clever animal behavior are usually accompanied by a reminder of our supposed common evolutionary ancestry. To the credit of The Scientist journalist, there are no such assertions in her interesting article.

God created human beings and land animals on the sixth day of Creation Week. But He made only human beings in His own image. And while many animals are endowed with remarkably diverse and amazing abilities, human beings from the time of Creation possessed not only the ability to express and understand original abstract thoughts through language but also the ability to know their Creator. In fact, Adam and Eve’s behavior immediately after they sinned demonstrates the ability to obfuscate the truth, evade personal responsibility, and conceal personal guilt, none of which had to evolve but appeared as soon as man rebelled against God.

While man shares common designs with some animals, humans have unique attributes that enable us to communicate with God and with each other. It is important as we enjoy learning more about animal abilities to avoid seeing those abilities as evidence for an unverifiable evolutionary past. Evolutionary thinking pretends we humans are just animals, not accountable to God or responsible to acknowledge Jesus Christ as Creator and Redeemer.