Are Human Rights Ever Wrong?

As God’s image bearers, humans are entitled to certain rights—but the Creator, not culture, makes the rules.

According to the United Nations website, “Human rights are rights inherent to all human beings, regardless of race, sex, nationality, ethnicity, language, religion, or any other status. Human rights include the right to life and liberty, freedom from slavery and torture, freedom of opinion and expression, the right to work and education, and many more. Everyone is entitled to these rights, without discrimination.”

It’s quite common today for an array of cultural voices to appeal to human rights as justification for their ideas and agenda. For example, in June 2022, when the US Supreme Court voted to overturn Roe v. Wade, news headlines and social media posts lamented the loss of the basic human right of abortion.

But where do human rights come from? Is everyone really entitled to them? And what happens when these rights conflict with what Scripture teaches?

In general, the evolution model explains human rights as a socially evolved concept that is currently beneficial to society. They are not a required moral reality and could be easily changed or swept away in the continued process of evolution.

According to dictators like Hitler, Stalin, Pol Pot, and Mao, human rights—if they exist at all—come from the ruling elites and only some people are worthy to access these rights. We see a similar mindset today as the communist government of China commits genocide against the Uyghurs, whom they arbitrarily deem undeserving of human rights.

Religions like Islam, with its low view of Jews and “infidels,” or Hinduism, with its caste system, would say human rights originate from some sort of deity but don’t apply equally to all.

In all manmade worldviews—which is everything but biblical Christianity—humans are ultimately attempting to construct and define human rights. If human rights originate from man, they can be added to, subtracted from, modified, revoked, or selectively applied by man. Old rights can be withdrawn to coerce and control people. New rights can be easily invented to push an agenda.

A striking example shows up in today’s LGBTQ movement. As a whole, the movement seeks to redefine human rights to include almost any sexual preference or any gender feelings at any given moment. LGBTQ revolutionaries have co-opted the language of America’s civil rights movement and equate the demand for the equality of those with different innate ethnicities to the demand for equality of those with various sexual preferences. They argue that, just as people of all skin shades receive equal rights, so should people of diverse sexual inclinations or variant feelings of gender.

Advocates argue that the Civil Rights Movement and today’s LGBTQ crusade are essentially the same fight. They dogmatically claim they’re both fighting for the rights of people and that sexual preference and skin shade are the same fundamental issue because in both cases the person is born with those characteristics. Is this equivalence true? Not even close.

The mission of the Civil Rights Movement was good, true, and biblical. Every person, no matter their ethnicity, deserves unconditional equal treatment as an image bearer of the living God. The diverse, immutable physical traits that people possess from birth, such as skin shade, display God’s beautiful creativity and in no way affect their inherent, indelible value.

However, an individual’s sexual preference is just that—preference. It is a choice. Of course, LGBTQ zealots reject this truth as they demand everyone accept that those who engage in the LGBTQ lifestyle are just “born that way.” But this argument quickly falls apart with a little investigation and logical, biblical thinking.

First, there is currently no biological or genetic basis for homosexuality. Any future discovery to suggest a scientific basis would simply confirm the fall’s corruption on mankind (Genesis 3).

Secondly, since we descend from Adam, all humans are born with sinful inclinations of various sorts. But having a sinful orientation or desire does not make that desire good, normative, or just. Someone inclined toward violence is not justified in beating his wife or children. Someone physically attracted to another person isn’t justified in committing adultery. Whatever the influencing factors, a sin is still a choice. And to choose any sexual activity outside the bounds of God’s design revealed in his Word is a sin, not a right.

Rights ultimately come from the Creator God—even the US Declaration of Independence acknowledges such when it says “that all men are created equal, that they are endowed by their Creator with certain unalienable rights, that among these are life, liberty, and the pursuit of happiness.” Without the one true God, human rights are nothing more than the whims of men that come and go like the ocean’s tides. And those tides can quickly change. In fact, those who call loudest for human rights often happily modify or take away the rights of others if those rights conflict with their definitions.

The Bible, God’s revelation of reality, says something much different and infinitely better. “Human rights” is a title given to a God-ordained truth that every human being has equal and inherent value far above any other aspect of creation. Why? Because every human being is made in the image of the living God (Genesis 1:27; Psalm 139:13; Jeremiah 1:5). Humanity is the crowning jewel of God’s creation. As such, all humans are intrinsically worthy of dignity, respect, care, and love.

Rightly understood, human rights come from God and are defined by God. The revelation of God in his creation, created order, and his Word provides the parameters for his image bearers’ rights. So when someone says, “A woman has a right to abortion,” we can authoritatively say, “No, she doesn’t,” because Scripture informs us that an unborn child is also a human (Psalm 139:14) and abortion takes a child’s life. That’s called murder, and murder is a sin, not a right. Or when someone declares that same sex marriage is a right, again we can boldly and lovingly state that it is not. God defined marriage and sexuality when he created male and female (Genesis 1:27), and Scripture is clear that homosexual behavior is sinful (Romans 1:26; 1 Timothy 1:9–11). Anything opposed to his revelation in the Bible is a sin, not a right.

Based on Scripture, every human bears the image of God and unequivocally has human rights.

Though the UN or other groups may attempt to redefine human rights and justice systems may pass laws advancing those alleged rights, no legal ruling changes the biblical outlines of sin and human value. Based on Scripture, every human bears the image of God and unequivocally has human rights. Thankfully, our innate, invariable human rights come from God, not man, and are clearly understood from God’s revelation.

Bryan Osborne is a speaker at Answers in Genesis. He earned his master’s degree in teaching from Lee University, and for 13 years he taught Bible history in a public school in Tennessee. 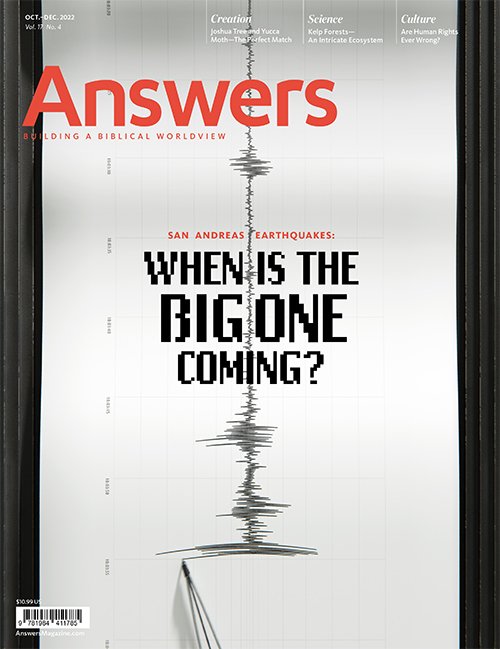 San Andreas earthquakes—when is the big one coming?