The “I Can’t Know” Religion

Several times over the years I’ve encountered worshippers in what I would call the “I Can’t Know” religion. 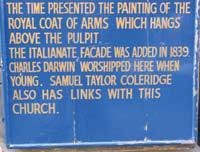 Several times over the years I’ve encountered worshippers in what I would call the “I Can’t Know” religion. Last year, when I was in Shrewsbury, England, the birthplace of Charles Darwin, I walked past a Unitarian Church which had a plaque on the wall declaring that Darwin attended this church when he was a child.

Then on the door of the church I read a sign:

“No one has the only truth.”

Now that’s an interesting statement. I felt like going inside and asking if this was a “true” statement itself and see what kind of a reaction I’d get! This declaration is one that says that people can’t know for sure if they have the truth—the “I Can’t Know” religion! Of course, if people claim they “can’t know,” then how can they be sure they do know they can’t know?

I came across a devotee of the “Can’t Know” religion while watching a film in a movie theater recently. Because of impending media interviews (the Creation Museum was featured in the film), I had to view what turned out to be a vulgar and blasphemous movie featuring the God-mocking comedian, Bill Maher: Religulous.

Even though Maher mocks Muslims and Jews in this movie, his venom is mainly directed against Christianity. His favorite phrase throughout the movie concerning the meaning of life—and also what happens after one dies—is that one simply “can’t know.”

Maher apparently doesn’t realize that he is committing what’s called a “logical fallacy.” When he states that you “can’t know,” he is insisting that he himself knows that a person “can’t know.”

This is the same fallacy as this Unitarian church saying “no one has the only truth.” Or like the person who once told me that there are no absolutes—which, as I pointed out to him, was an absolute statement!

Now, Bill Maher thinks he is non-religious—but he really has a religion: the “Can’t Know” faith! That’s his belief system. Maher thinks he can determine whatever truth he wants to believe. It is ultimately a trust he puts in man and his reasoning—instead of trusting in God. He thinks he can be his own god.

At Answers in Genesis, we proclaim a “Can Know” religion, Christianity!

1 John 5:20:
And we know that the Son of God has come and has given us an understanding, that we may know Him who is true.

The “Can’t Know” religion destroys lives, leaving people with no purpose and meaning—and it ultimately separates them from their Creator forever. It is illogical and ignores the facts of both science and Scripture. It is a rebel’s refuge most frequently disguised in intellectualism.

The “Can Know” religion changes lives. People can know Christ now and will spend eternity with their Creator forever. That’s what Answers in Genesis is all about—changed lives for now and eternity. Wouldn’t it be great to see a testimony from Bill Maher one day, showing that he’s changed from the “Can’t Know” religion to the “Can Know” one? Let’s pray that Bill and atheists like him will come to know the Lord Jesus as their personal Savior.

Previous Article For Whom Should We Vote? Next Article The Year of Darwin