Hurricanes and a Loving God?

If there really is a God of love, how can He allow these horrible things to happen?

As with the questions that came after the 9/11 terrorist attacks, and after the massive tsunami in the Indian Ocean that killed tens of thousands just after Christmas 2004, people are now responding to the devastating Katrina and Rita hurricane disasters by asking: "If there really is a God of love, how can He allow these horrible things to happen?" 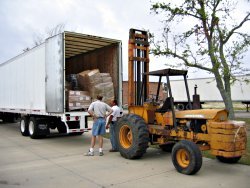 Unloading 26 pallets of hurricane-relief items collected by AiG for distribution in Ocean Springs, Mississippi (including school supplies for thousands of students who were to start school three days later).

In an article authored by Nancy Gibbs for Time magazine online (which included references to Noah's Flood), the writer searched for answers to the age-old question as to how to reconcile death and suffering with the loving God of the Bible.

She quoted various "answers" given by the religious community:

Then there is the response of those convinced they know God's politics and are just as intent on seeing the guilt assigned. An ultraconservative Israeli rabbi declared that Katrina was retribution for US support of the Israeli pullout from Gaza. Louis Farrakhan of the Nation of Islam called Katrina judgment for the Iraq war.

The Christian Civic Group of Maine noted that the hurricane struck just as New Orleans was planning a huge gay-rights festival. A Kuwaiti official said, "The Terrorist Katrina is One of the Soldiers of Allah." There was, in other words, broad agreement in some far-reaching quarters that Katrina represented God's punishment, just no consensus on the sin [emphasis mine].

The survivors often say God saved them … but if he chose to save the living, did he choose to kill the lost? It is an occasion for atheists to remind believers of the flaws in the case for a benevolent God [emphasis mine], and even the most mainstream pastors acknowledge that at times like this they are pressed for answers about how a loving God lets hateful things happen.

"Of course, this makes us doubt God's existence," declared the Archbishop of Canterbury after the Asian tsunami, before calling his country to deeper prayer. …

[An] evangelist called Katrina "perhaps the worst tragedy America has known since the Civil War." But he added, "It may be the greatest opportunity to demonstrate God's love in this generation."

I must admit, I sometimes get frustrated with church leaders who are not seen as giving real answers. 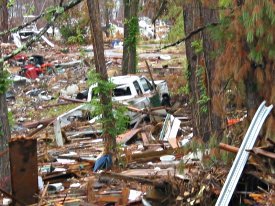 This is a photo taken by one of AiG's 12 relief workers of the massive devastation at Ocean Springs, Mississippi. Note the boat in the upper left corner that got swept ashore amidst the remains of a destroyed home and its contents.

Now, I believe the major reason most of the church cannot (or does not) have logical answers to give the world is because most have given up (or ignored) the foundational importance of the history in Genesis chapters 1-11.

Because most Christian leaders have rejected the geology, biology, anthropology and astronomy of Genesis 1-11, accepting instead the secular beliefs concerning the past (evolution and/or millions of years), they have actually disconnected the Bible's history from the real world.

For most Christians, the Bible is seen as just a book about morals, relationships and "spiritual matters." Thus most Christians respond to hurricane tragedies only with comments about showing love, kindness, etc. Why? Because they can't understand why a loving God would allow such a terrible thing.

By the way, Christians should respond with acts of love and kindness as the Bible instructs, but they also need to know how to resolve the dilemma of God and catastrophes.

Thus the Bible's history connects to death, fossils, the dirt, plants, animals-to everything. It connects to every aspect of reality and explains what we observe in this present world.

Only those who take Genesis 1-11 as literal history can give logical answers to what seems to be a terrible dilemma for Christians.

Sadly, most people (even most in the church) have become so secularized in their thinking, that when they look at the world through secular/evolutionary "glasses" and try to understand Christians talking about a God of love, well, it just doesn't make sense to them.

Nancy Gibbs actually summed up the issue (without realizing it) when she wrote:

There was, in other words, broad agreement in some far-reaching quarters that Katrina represented God's punishment, just no consensus on the sin [emphasis mine]. 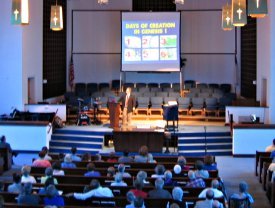 She's right. People need a "consensus on the sin." The answer is: the "original sin." We are all sinners (in Adam). We are not "innocent" as she also wrote-we are sinners.

As Pastor D. James Kennedy of Florida said recently (on a national television broadcast) about the book Why do bad things happen to good people? he answered: "They don't! There aren't any 'good' people!" (Dr. Kennedy, by the way, is the national honorary chairman for AiG's huge Creation Museum project.)

And … until we understand that our loving God stepped into history to save us from the mess we caused, we will not understand who He is-and what He has done for us in providing the only mean of salvation so that we can live forever with Him.

We just finished a special DVD on AiG's hurricane-relief efforts in Ocean Springs, Mississippi. In addition to some shocking video of the devastation along the Gulf, A God of Suffering? features the full message given by Dr. Mitchell (see photo above) at First Baptist Ocean Springs, plus video of the AiG staff engaged in relief work. For more information, please visit our bookstore.

Previous Article No Choice! Next Article “Coals of Fire”