The ‘Pilgrim’ Who ‘Preaches’ From a Grave

I want to bring to your attention the type of person everyone should look up to as one of the real heroes—a hero for the Christian faith: John Bunyan (who was saved from a rough background). 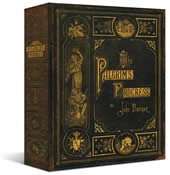 See our USA bookstore for a very special offer. It’s this timeless classic, plus 8 other books by John Bunyan—all in one collector’s edition!

Do you know who …

These are just some of the fascinating facts about one of the most famous preachers and writers in history. They describe the Englishman John Bunyan, author of what has been called the most successful allegory ever-Pilgrim's Progress.

In a day when so many people in the church look to pagan movie stars and other non-Christian "media darlings" as heroes or heroines, I want to bring to your attention the type of person everyone should look up to as one of the real heroes-a hero for the Christian faith: John Bunyan (who was saved from a rough background).

My father is also one of my heroes of the faith. He would never knowingly compromise the Word of God. Now, the ministry of Answers in Genesis follows in that tradition, for we would never knowingly want to compromise the Word of God. Despite the mocking from the world and even some church leaders, AiG stands upon the authority of God's Word-beginning in Genesis-as a witness to the church and the world.

John Bunyan, too, was a non-compromiser. Back in 1656, he became one of the "non-conformists." After Cromwell's famous time of the "Protectorate" came to an end, the government in England tried to stop the growth of independent churches and forbade preaching by anyone other than those licensed to do so in the state church-the Church of England.

Bunyan refused to stop preaching the Word of God and was eventually imprisoned in 1660 in an attempt to get him to conform. But what men meant for evil, God meant for good. It was during one of his jail terms that he began writing the now famous Pilgrim's Progress (the first edition being published in 1678).

Over 300 years later, Pilgrim's Progress is still a best-seller, continuing to "preach" the gospel message to young and old alike. It came from the pen of a hero of the faith who stood on his convictions and would not compromise God's Word, which clearly tells us to preach the gospel to every human being.

Bunyan's tomb stands in this graveyard right near a path that thousands walk on every day. On each side of the tomb of this hero of the Christian faith are sculptures which sum up the message of Pilgrim's Progress.

One sculpture shows the book's main character, Pilgrim, with the burden on his back, and one shows Pilgrim kneeling before the Cross with that burden falling off his back. What a summary of the gospel! And it's being "preached" from Bunyan's tomb every day.

And, yes, as you would expect from such a non-compromiser, Bunyan believed in six literal days of creation, as he wrote in his exposition of the first ten chapters of Genesis.

To share more about one of the heroes of the faith so that our children will not forget those who would not compromise God's Word, AiG is thrilled to partner with our publisher, Master Books, on a very special project.

We are making available a unique reprint of a number of Bunyan's famous works; and, for the first time ever, copies of the sculptures from Bunyan's tomb (sculpted as bookends by one of our own highly talented Creation Museum sculptors).

To find out more about this special reprint of Bunyan's works as well as the unique bookends, see the details in our USA bookstore (not available elsewhere). Get these for your home or office-or as gifts for your pastor, friend or family member.

They're a tremendous conversation starter, and they "preach" the uncompromised truth of God's Word, just like the sculptures on Bunyan's tomb!