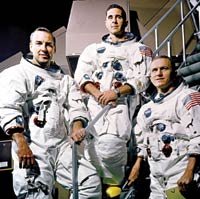 When NASA officials asked the Apollo 8 crew to report during their Christmas Eve broadcast, James Lovell, William Anders, and Frank Borman (pictured left to right) responded by reading from Genesis 1.

As the world turned its attention to the heavens on December 24, 1968, the Apollo 8 crew turned their eyes to earth and their thoughts to the One who formed it. In awe of the Creator, they delivered the famous Christmas Eve broadcast from space.

With an estimated half billion people watching the live images of the earth, the crew members William Anders, Jim Lovell, and Commander Frank Borman took turns reading the first nine verses of Genesis.

Although most of us will never get a chance to proclaim God’s glory from space, we can certainly use whatever vocation God has placed us in to share His story, beginning with the very first verse.

Next Article Have Motor Home—Will Travel