When Bob and Jan Thompson retired, it certainly wasn’t from doing the Lord’s work. Having served 43 years in education, the Thompsons developed a passion for communicating the creation message after attending an Answers in Genesis (AiG) seminar in California, USA.

They soon felt called to share with others what they had learned about the importance of Genesis. So they packed up their motor home and headed to the Creation Museum in Northern Kentucky, where one month of volunteer work turned into six.

Because they realized that some churches could not afford an AiG seminar, Bob and Jan, along with two other retired couples, felt led to take the message to smaller churches. They showed DVDs by Ken Ham and other creationist speakers on a large screen and created the atmosphere of a much bigger seminar. 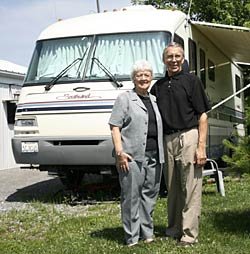 Two years later, God has blessed their video conference ministry to include approximately 60 people from 19 states. All 60 have been trained and certified to conduct AiG video conferences.