Boys and Girls and Geese

Imagine a dad sitting down with his children to tell them a story. He begins, “Children, did you know you are related to every moose, every dog, every goose, every finch, every tortoise and every cat?”

The dad continues, “But it’s not just animals you are related to. You are also related to all living things, every plant too.”

Can you then imagine the children’s questions and the dad’s answers?

“Of course, Son, you are related to everything—bananas, tapeworms, ticks, bacteria, flies, ants, bees, camels, pigs—yes, every living thing is related to you.”

“Well, children, I have this new book that I’ll read to you called Charlie and The Tortoise.1 The author tells a story about a man named Charles Darwin who popularized an idea to explain how living things arose by themselves. Let me read you the story.”

Yes, there is a recently released children’s book that tries to indoctrinate children into believing that a fairy tale is true! 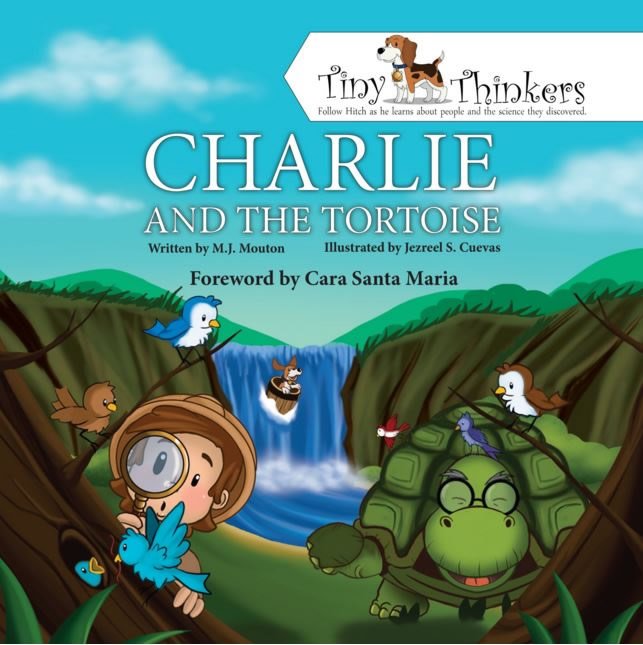 Notes about Darwin and his book On the Origin of Species are found at the end of the book. They include this statement:

His book showed how all living things are connected, and how animals and plants adapt over long periods of time!

The children’s book states the following:

After years of study, Charlie taught the world, that we’re all connected, every boy and girl. Every horse and every moose. Every dog and every cat. Every finch and every goose. Even tortoises that chat!

Now, what is the author’s main evidence to show children that all life is related and that all boys and girls evolved from ape-like creatures?

Well, it’s depicted in this diagram: 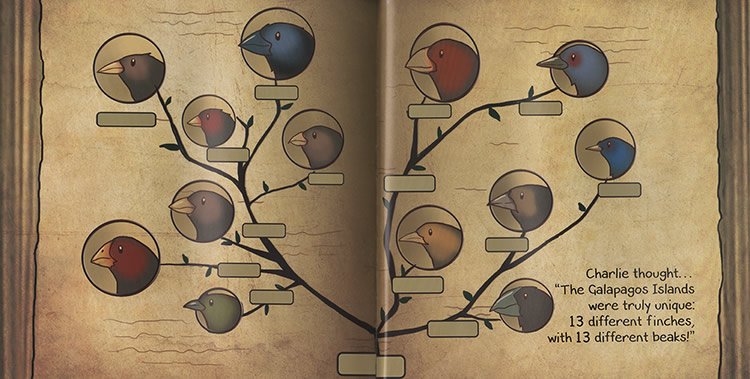 Now, isn’t that powerful evidence? Isn’t it obvious that different species of finches prove that all life is connected, and that boys and girls are related to all animals and plants? Unfortunately, generations of high school and college students have already been led to believe that speciation in finches is evidence of molecules-to-man evolution.

Following the finch illustration, the book shows a diagram of reptiles supposedly evolving into birds, and ape-like creatures evolving into humans. 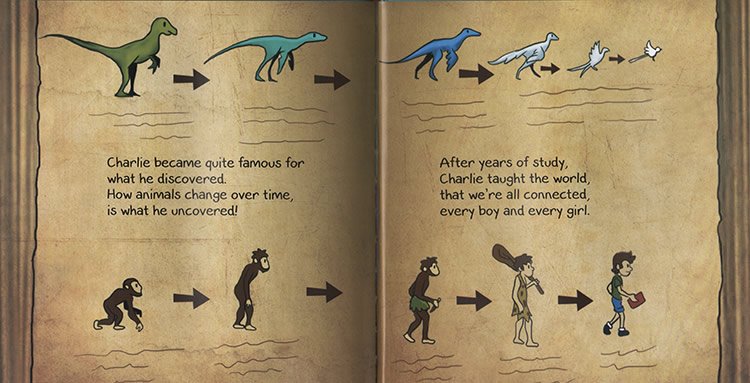 From variation in finches to reptiles becoming birds, and from ape-like creatures becoming humans! Actually, I think I might use this book with my own grandchildren to help them see that evolution is simply a fairy tale! Then I will take our grandkids to the Creation Museum and show them our display of Darwin’s finches, plus an exhibit on our dog skulls. 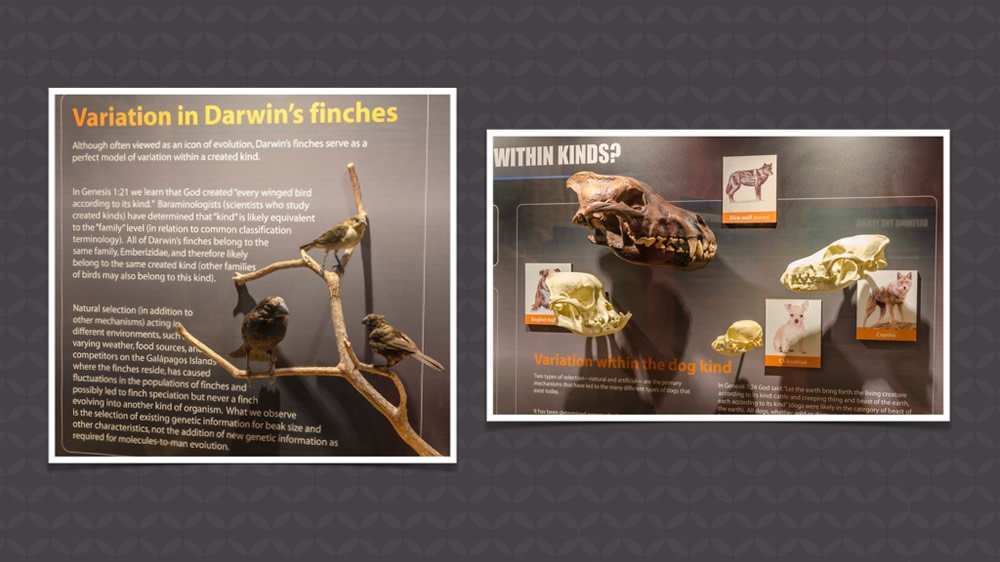 I would explain to my grandchildren that there is actually more variation in species of dog skulls than in finches. Then I would talk to them about the fact that finches remain finches and dogs remain dogs. I would then read God’s Word in Genesis out loud, where we are told that God created each kind of animal after its own kind. According to the Bible, we would expect each kind to produce its own kind—and that’s exactly what we observe in nature.

Sadly, many parents will read this new Darwin book for children and present the evolutionary content as true! To counter the massive indoctrination of evolution in popular books and videos, public schools, media, and museums, Answers in Genesis has made a large range of books, DVDs, and other resources available to help parents teach children the truth of Creation, the Fall, and the saving gospel.

What are the implications of teaching generations of children that they are just animals who are related to all living things like animals and plants? The more such a view permeates their thinking, the more they will see human life as nothing special. This would have an effect on how they view abortion, for example. After all, humans are just animals—if you can get rid of an animal you don’t want, why not also get rid of a child in the womb? It would also have an effect on how young people view suicide. After all, if we are just animals and we cease to exist when we die, what’s the point of living anyway? Unfortunately, there is an alarming increase in teenage suicide (as reported recently). Also, why not kill fellow humans if you don’t like them, as they are just animals anyway in a survival-of-the-fittest world?

Now don’t get me wrong. A young person will not wake up one day and say, “Oh, I’m just an evolved animal; therefore, I’m going to abort a baby, or kill someone, or commit suicide.” But in reality, what they are being taught concerning atheistic evolution will permeate their thinking. Over time, they will begin to act consistently with this evolutionary mindset that has saturated their worldview.

I urge you to do your best to raise up generations of children who understand that they are special—made in the image of God. But at the same time, we need to share with them that they have a problem called sin, and that’s why God sent His Son to pay the penalty for our sin so that the relationship with our God can be restored. After all, God is “not willing that any should perish but that all should come to repentance” (2 Peter 3:9). God loved the world so much that He gave His one and only Son to provide a gift of salvation for us.

No, we’re not related to geese, finches, dogs, cats, or bananas. We were created in the image of God, separate from all living things (Genesis 1:27). That’s why God sees us as so valuable, in fact, so much so that He Himself paid the price so we can be saved and live with Him for eternity.

To help your children understand the true purpose and meaning of life, bring them to the Creation Museum and take advantage of our More Kids Free program through June. Also, visit the Answers in Genesis online bookstore and obtain resources that will teach your children the truth about who they are, where they came from, what their problem is (sin), and what the solution is in Jesus Christ. And plan to bring them to the life-size Ark that opens July 7 here in Northern Kentucky and teach them the truth about God’s Word and its accounts of the Flood, Ark, and Christ coming to earth to offer salvation.