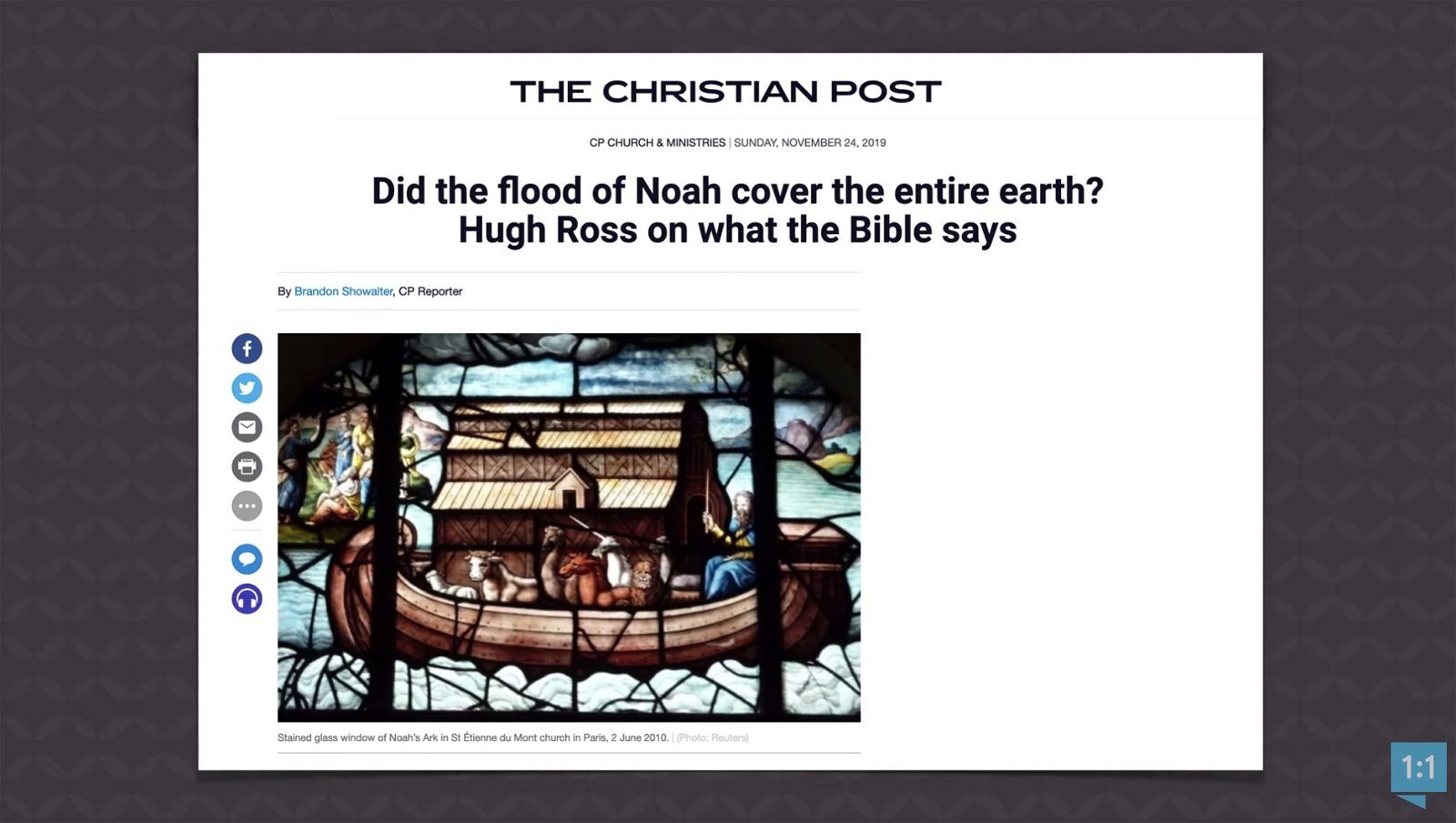 Some people don’t believe in a global flood. Since the geological revolution in the 1800s—driven by naturalistic, deistic, agnostic, and atheistic assumptions—some Christians have been attempting to fit the long ages into Scripture.

Since the geological revolution of the 1800s—when deistic, agnostic, and atheistic scientists working from the assumptions of naturalism began to suggest long ages for the earth and its fossil record—some Christians have been attempting to fit the long ages into Scripture. That idea has many of its own problems (such as putting death before sin), but it necessarily entails another belief: Noah’s flood was local, not global. After all, a global flood would wash away the millions of years. So, if you don’t have a young earth, you also don’t have a global flood of Noah’s time. But does this hold up with what Scripture teaches?

Dr. Hugh Ross of Reasons to Believe has long been a proponent of the big bang, old earth creation, soulless humans before Adam and Eve, and a local flood. Because his belief in millions of years demands a local flood, he must try and explain away what the Bible clearly states about the extent of the flood. A recent article published in The Christian Post, based on a YouTube video featuring Ross, explains some of his arguments in favor of a local flood. But do they hold any water? Not at all.

Let’s look at Dr. Ross’ major arguments (I am quoting from the article):

“2 Peter 2:5 states that the ‘world of ungodly people’ was destroyed with a flood . . . The Greek word for ‘world,’ cosmos, is also qualified with an adjective in that passage and earlier in 2 Peter, meaning that text is speaking of less than the whole globe.”

Ross neglects to mention that 2 Peter 2:5 states that only eight people survived the flood. How could eight—and only eight—people survive the flood if it was just local? People outside that geographical area could have survived, or as the floodwaters rose, they could have fled to a different region.

Furthermore, in the next chapter, the Apostle states,

For they deliberately overlook this fact, that the heavens existed long ago, and the earth was formed out of water and through water by the word of God, and that by means of these the world that then existed was deluged with water and perished. But by the same word the heavens and earth that now exist are stored up for fire, being kept until the day of judgment and destruction of the ungodly. (2 Peter 3:5-7)

The early chapters of Genesis do not mention Antarctica or Greenland, or the extent to which people had filled the earth, so I don’t know where Ross gets this idea (likely assuming these regions had the same climates they have today). But his argument is a poor one, anyway, for we know the continents have broken up since creation. The way the continents are arranged today is not the same from the time God originally created them. Antarctica and Greenland were not where they are located today. (For example, the fossil record shows they once hosted tropical plants and animals.) During the global flood, these land masses broke apart and rapidly moved to where they are found today (see this article on catastrophic plate tectonics for more information).

“The most explicit texts about the flood, he said, come from Job, Psalms, and Proverbs.”

Frankly, this is a ridiculous argument. The “most explicit texts” about the flood aren’t found in poetic or wisdom literature of the Bible. They are found in the historical narrative chapters that describe the event—in Genesis chapters 6–8.

“Psalm 104 — the longest of what are called the Creation psalms — speaks of the third day of creation, of God transforming the planets [sic] from a world of water without continents or islands to world of continents, islands, and oceans. In verse 9 of that Psalm it is established that never again will water cover the whole face of the earth.

“So there's an explicit statement, once we've got continents on the face of the earth, never again are we going to return to a water world.”

Read in context, Psalm 104:6–9 is clearly a reference to the flood—a global flood. So, Ross’ argument is pointless. Verse nine is simply referencing God’s promise in Genesis 9 (given with the rainbow as a sign) that God would never again destroy the earth with a flood. (Of course, if the flood was local, then God did not keep this promise because we’ve seen many devastating, and even massive, local floods since Noah’s day.)

Learn more about Psalm 104 in this article.

The Christian Post states: “When Ross speaks with those who hold the young earth creationist view, they often point to Genesis 7:11 and the verses that follow where the text speaks of the high mountains being covered with water to a depth of 15 cubits.

“Yet in biblical Hebrew, the vocabulary is relatively small, he said, noting the word for mountains is equivalent to hills or mounds . . .

“‘I think the clincher is what you see in Genesis 8:5-9 when the floodwaters are receding and Noah releases a dove,’ Ross said.

“From the dove's perspective, water covered the whole face of the Earth, the same phrase used earlier in Genesis 7 where it speaks of waters covering the mountains more than 15 cubits. Since the dove could not have seen the entire Earth, the word being used must be referring to what can be seen by the observer, Ross argued.”

Biblical creationists have noted that Genesis 7 isn’t referring to the massive mountains we have today—after all, the Himalayas, Rocky Mountains, and other mountain chains were formed during and after the flood. The rock layers that form these mountains today are filled with fossils, and, since there was no death before sin, we know the layers were formed after creation week, during the flood. So the text of Genesis 7 is referring to whatever mountains existed in the world before the flood.

Immediately after describing the waters covering the mountains to 15 cubits, Genesis 7 says,

And all flesh died that moved on the earth, birds, livestock, beasts, all swarming creatures that swarm on the earth, and all mankind. Everything on the dry land in whose nostrils was the breath of life died. He blotted out every living thing that was on the face of the ground, man and animals and creeping things and birds of the heavens. They were blotted out from the earth. Only Noah was left, and those who were with him in the ark. (Genesis 7:21–23)

The text couldn’t be clearer—it says it three times for emphasis: everything that lived on land that had the breath of life in it died. Everything.

The text couldn’t be clearer—it says it three times for emphasis: everything that lived on land that had the breath of life in it died. Everything. Only Noah and those on the ark were left. This isn’t referring to just what the observer can see. All mankind not on the Ark and every land-dependent/air-breathing thing not on board1 were blotted out from the earth.

Furthermore, when Noah released the dove, he sent it with the express purpose of determining if the ground (Hebrew= “adamah”) in the vicinity (not the whole earth) was dry (Genesis 8:8). Also, the text doesn’t say that the dove thought the whole earth was covered in water. It says, “But the dove found no place to set her foot, and she returned to him to the ark, for the waters were still on the face of the whole earth” (Genesis 8:9). She couldn’t find anywhere to perch because the waters still covered the whole earth (at this point, only the tops of the mountains were visible, see verse 5)

The Post continues: “Reasons to Believe takes the view that the first 11 chapters of Genesis are indeed history, that what occurred were in fact actual events.”

Now, Ross may, in some way, believe that the events in Genesis 1–11 are “history,” but he doesn’t mean “history” and “actual events” in the same way we do. It’s what I would call Newspeak! What he means is that we can’t read Genesis 1–11, take it literally as written, and understand it. Instead, we have to take something from outside the Bible—the idea of millions of years—and add it into the Bible. Then, we have to reinterpret Genesis 1-11 to make it somehow fit with these ideas from outside Scripture. This reinterpretation is nothing but compromising God’s Word with the religion of naturalism.

Conclusion: Scripture Does NOT Support a Local Flood Theory

Really, Scripture is not Ross’ final authority—man is. God’s clear Word is being reinterpreted by Ross in light of man’s ideas about the past. But, as Christians, we must allow God to be our authority in all areas! He’s the only one who was there, knows all things, never makes mistakes, and cannot lie. We should never take ideas from outside the Bible and try and somehow fit them into the text. That’s a compromise on the truth and authority of God’s Word!

Ross, and others like him, are actually doing much harm to the church, as seen in the continuing exodus of the younger generations.

Ross, and others like him, are actually doing much harm to the church, as seen in the continuing exodus of the younger generations. They are encouraging others to follow their path of compromise—and once you open the door to compromise, where do you shut it? If God’s Word isn’t clear in Genesis (the foundation for all our doctrine!), then where else can we take man’s ideas and make it say something it doesn’t say? We’re seeing a generation of Christians do this with the meaning of marriage, gender, the abortion issue, and more.

This item was discussed on Monday on Answers News with cohosts Bryan Osborne, Dr. Gabriela Haynes, and Avery Foley. Answers News is our weekly news program filmed live before a studio audience here at the Creation Museum and broadcast on my Facebook page and the Answers in Genesis Facebook page. We also covered the following intriguing topics: