Does a “Recently Deciphered 4,000-Year-Old Tablet” Discredit the Genesis Account of Noah's Ark?

An ancient Mesopotamian clay tablet corroborates the biblical record of the Flood and Noah’s Ark. 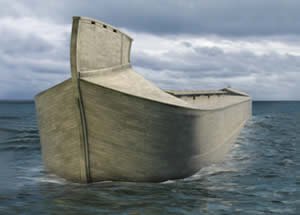 The design of the full-sized Ark planned for the Ark Encounter theme park south of Cincinnati incorporates several features of ancient ship building, including a bow fin.

“But forget all those images of a long vessel with a pointy bow—the original Noah’s Ark, new research suggests, was round.”1 Those words highlight the AP article discussing the tablet that just went on display at the British Museum on January 24.

Over the weekend, media outlets from around the world ran a story about a “recently deciphered” tablet that bears strong resemblance to the biblical account of Noah, the Ark, and the Flood. We have been asked by many people (especially those who visit the Fox News website) to respond to yet another Ark report attempting to undermine the historicity of the Genesis account.

This recent assault on God’s Word comes from Irving Finkel, the assistant keeper of Ancient Mesopotamian script, languages, and cultures at the British Museum. According to reports, Finkel received the tablet a few years ago from the son of an amateur historian named Leonard Simmons, who had acquired it in the Middle East following World War II. The cell-phone-sized tablet is also the subject of Finkel’s new book, The Ark Before Noah.

The Claims Against Noah’s Ark

So what’s the big deal about this tablet, which Finkel calls “one of the most important human documents ever discovered”? And how does it supposedly discredit the Bible’s account of Noah’s Ark and the global Flood?

First, Finkel and the journalist who wrote the AP story push the long-discredited “documentary hypothesis,” meaning that they believe Genesis and much of the Old Testament was largely composed during the time of Ezra following the Babylonian exile. Therefore, they automatically assume that the author (or compiler) of Genesis merely copied the Flood account from the Babylonians. Thus, for those that cling to the documentary hypothesis, any flood story from the Middle East that apparently predates the fifth century BC will naturally be touted as one of the sources of the biblical account. Since Finkel’s tablet is reportedly dated to approximately 2000 BC, these individuals assume that it is more original and therefore more reliable than the biblical account. Finkel even jokes about the revelation of finding “Holy Writ”—namely, Ark-building instructions—chiseled on a tablet that looks like a piece of wheat cereal.

Second, the primary difference between the flood account on this tablet and the biblical account is that the Mesopotamian tablet describes the “ark” as being a “round boat.” The article states that a round boat makes sense because “coracles were widely used as river taxis in ancient Iraq and are perfectly designed to bob along on raging floodwaters.” A coracle is a small, round boat used primarily for fishing or transportation in the United Kingdom and India. Finkel states that a coracle is the “perfect thing” because “it never sinks [and] it’s light to carry.”

Our Response: Defending the Testimony of God’s Word

Assuming for the moment that the tablet is authentic and the translation is accurate, do these claims stand up to scrutiny?

Should this tablet “cause consternation among believers in the Biblical story” as the article suggests? Of course not—in fact, this is just another archaeological find that corroborates the biblical Flood account. It is only reasonable that people in cultures the world over—being descended from the eight people that got off the Ark—would recall various versions of the Flood in their cultural memory and traditions. Hundreds of flood stories have been found in cultures around the world. While many of these contain legendary embellishments, it is very obvious that many of them refer back to a real event described in Genesis, many of the details of which were passed down through the generations. Consider some of the other information on Finkel’s tablet that was briefly mentioned in the article:

It would be interesting to see the translation of the full tablet to see what other similarities might exist.

A common feature among many of these non-biblical flood accounts is that certain details become localized. That is, the names of the mountain that the ark landed on, the types of animals released, or the name(s) of the god(s) in the account have been changed to fit the region in which the story is found. This seems to be the case with Finkel’s tablet as well, as it describes a circular boat, matching the popular “river taxis” of ancient Mesopotamia. Yet, the biblical account, which reliably records the details of the actual global Flood, does not follow this practice of localizing the event.

One of the problems with the skeptics’ claim that the biblical Flood account was copied from other ancient cultures is that the biblical account is far more authentic. The Ark described in Scripture has the right proportions for a ship made to survive the global Flood with the perfect blend of strength, stability, and comfort. The circular ark described in this tablet or the cube-shaped ark of the Epic of Gilgamesh would pose severe dangers for their human and animal passengers. Also, the biblical account of the Flood does not contain legendary embellishments that are so characteristic of these other flood accounts around the world.

This tablet allegedly contains the oldest known reference to the ark, so Finkel and others automatically assume that the story is more accurate than the biblical record. However, many Christian researchers believe that Genesis actually consists of numerous eyewitness accounts that were eventually compiled by Moses in the fifteenth century BC. If this view, known as the tablet model (or toledoth view) is accurate, then the biblical account of the Flood would be much older than any other record. Even if this view is incorrect and Genesis wasn’t actually written until the time of Moses, it would not follow that Finkel’s tablet is more accurate. God inspired Moses to accurately record history. Furthermore, even if it is 4,000 years old the Mesopotamian tablet is still centuries removed from the worldwide Flood, which occurred close to 4,400 years ago.

Secular researchers often jump to the conclusion that the Bible borrowed from other ancient records. Yet other explanations exist for the similarities between Scripture and these ancient myths. It could be that the other myths borrowed from the biblical writers, assuming the tablet model is accurate. Or it could be that the Bible and the ancient myths are records of actual events, but while the Bible records the true history of our world, these other myths are loaded with legendary embellishments but still contain strands of truth. For more details on this subject, please see Is Genesis 1–11 a Derivation from Ancient Myths?

Have We Heard this About the Ark Before?

The Ark Encounter will feature a full-sized Noah’s Ark and other exhibits to teach the world about God’s Word and the message of salvation!

Interestingly enough, this is not the first round of reporting on Finkel’s tablet. Four years ago, The Guardian newspaper reported on the translation of the tablet, which at that time was dated to be 3,700 years old, but it received very little attention.2 Perhaps it is bigger news now because, in addition to Finkel’s book and the forthcoming television documentary, our Ark Encounter project has brought more focus on the Ark.

It even seems that the recent AP article took a shot at the Ark Encounter with the following words: “But forget all those images of a long vessel with a pointy bow.” So according to the AP writer, we should eschew depicting the Ark in a manner consistent with ancient shipbuilding and the inerrant Word of God and trust the words of an ancient tablet that depicts an ark that almost certainly could not survive the Flood.

We know that skeptics will continue to attack the biblical accounts of Creation and the Flood. This is precisely what Peter, inspired by the Holy Spirit, wrote to his readers in 2 Peter 3:1–7. Rather than causing consternation among believers, Christians can rejoice that God has given us the true history of our world beginning in Genesis. This latest tablet actually corroborates the biblical record of the Flood and the Ark.

The Ark Encounter will give us an opportunity to share the truth of God’s Word with millions of visitors, while countering the false claims of our culture. By explaining the truth of Noah, the Ark, and the Flood—the message of God’s mercy in the midst of global judgment—we will be able to point people to Jesus Christ, the only one who can save people from the coming eternal judgment.

To learn more about how you can partner with us in this God-honoring venture and incredible evangelistic opportunity, please visit arkencounter.com.