An Encouraging Update from Our Friends in Ocean Springs, Mississippi

An encouraging update from our friends in Ocean Springs, Mississippi 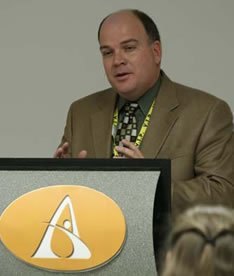 Pastor Mike Barnett of Ocean Springs, Mississippi was no more than 15 minutes into his tour of the Creation Museum today when his wife called.

“You’re not going to believe what just happened,” she said. “President Bush’s helicopter just landed behind the [church] office on the football field. And he’s touring Ocean Springs right now. Wish you were here!”

“You tell him if you meet him, that I love him and that I’m praying for him, and to keep going. But I’d rather be here today with a Bible in hand, visiting Answers in Genesis–USA (AiG) than down there with the President of the United States,” Pastor Barnett told AiG employees and volunteers. His words were sincere—he’d rather share a ministry update with his friends at AiG over a possible Presidential encounter.

During a brown bag lunch today, AiG staff members were blessed to hear Pastor Barnett share how AiG’s Katrina outreach efforts (partnering with First Baptist Church of Ocean Springs) have continued to minister to the hearts of those who lost much as a result of the devastating hurricane. He also shared a compelling message from Romans 8:28.

While much rebuilding of the community is still needed, Pastor Barnett told how God softened the hearts of those within the public schools. Through the donations of 3,000 backpacks filled with school supplies (made possible by the generosity of hundreds of AiG supporters), Pastor Barnett said the Lord enabled his church to do some things they weren’t able to do before Hurricane Katrina.

Helping those in the public schools was one of those things. Before Hurricane Katrina, there were no Bibles from the Gideons, no prayers before football games, and no mention of God when the youth pastor would eat in the cafeteria with the students.

But after the backpacks arrived, things changed! The hearts of the school officials were softened. After years of not being able to do so, the Gideons were recently allowed to pass out Bibles to fifth grade classes. And Pastor Barnett was invited to speak to the entire school board at a rally where he shared the gospel with school officials and teachers.

Describing what this open door between the public school and church means, Pastor Barnett said, “We can rebuild everything around us … but the things that Katrina brought and AiG’s obedience brought to us—there’s no way possible that we could have done that. Only God can do those things.”