Hundreds of Species Voyage Across the Pacific After Japanese Tsunami

Six years ago, a massive 9.0 earthquake rocked the island of Japan, but the worst was yet to come just hours later. Following the earthquake, a 125-foot tall tsunami decimated the Japanese coastline, killing 18,000 people, melting down three nuclear reactors, and washing 5 million tons of debris out to sea, including fishing boats, docks, buoys, and various pieces of wood and plastic. This debris was caught by ocean currents and slowly transported 4,000 miles to coastlines on the other side of the world, including Hawaii and the Pacific coast of North America.

This tsunami debris didn’t come alone. Thousands of tiny voyagers survived the long passage at sea by riding on plastics. Marine biologists, working with local and state officials as well as citizen scientists, catalogued and bagged 600 pieces of tsunami debris and, with them, at least 289 living species (biologists suspect there are likely more that escaped their notice).

These shoreline species, which consisted primarily of invertebrates such as sea stars, barnacles, mussels, worms, and hydroids as well as two vertebrate fish species, managed to survive the long transoceanic voyage due to the more favorable conditions the unsinkable plastic and other synthetic materials supplied them. Small amounts of wood won’t survive such a long voyage because it rots, sinks, or is bored full of holes by hungry or homeless sea creatures.1

Biologists were astounded by the number of creatures that survived and reproduced along the way. This is the first time such large-scale rafting has been observed. Many are concerned that these non-native species could establish populations and become invasive species in their new environments.

Researchers expect debris to continue rolling in for the next 10 springs and, with it, more foreign organisms.

Scientists have previously observed rafting, the dispersion of organisms across the ocean on various debris. Creationists have long suggested that rafting helped distribute certain plants and animals around the world after the Flood of Noah’s day. 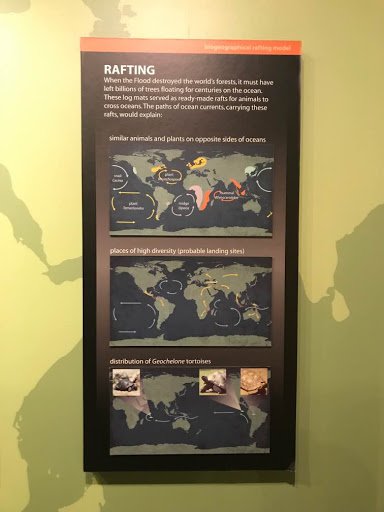 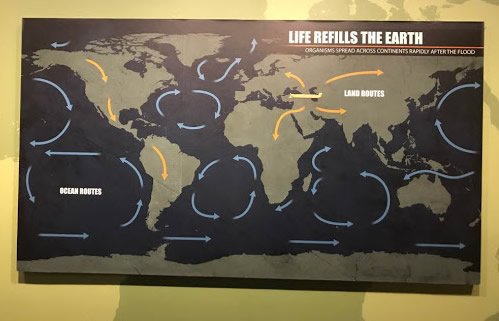 Here’s how this works. We observe genetically similar plants and animals that are widely separated geographically, often by swaths of ocean. These are called disjunct, or split, ranges. For example, we find giant tortoise populations on islands in the Pacific and again on islands in the Indian Ocean, but nowhere else. How did they get there? Disjunct species are a puzzle for modern biologists because distribution patterns of the present don’t explain them.

After the eruption of Mt. St. Helens in 1980, hundreds of thousands of Douglas fir trees piled up in Spirit Lake and remained floating for over 25 years. The global Flood would’ve ripped up the forests of the world. Some would’ve been buried, but large amounts of vegetation would’ve remained afloat, perhaps for centuries, forming floating log mats. Plants, animals, and other organisms could’ve been transported by ocean currents aboard these massive mats, just as the Japanese species were transported across the Pacific in only a few years. Interestingly, most species with split ranges across oceans match with the patterns of ocean currents, providing further support for this model.

If a small-scale tsunami (small in comparison to the global Flood) could transport at least 289 species, imagine what a global catastrophe could do? Also, remember that after the Flood, the world was settling back down from complete upheaval. The continents had been rearranged, likely due to Catastrophic Plate Tectonics. As the continental plates settled back down, earthquakes and their accompanying tsunamis would likely have been rather common. That would only have aggravated and contributed to species distribution around the world.

This new research on the transoceanic voyage of survivors from Japanese coastlines suggests a realistic, testable mechanism for post-Flood distribution.