Almost Ready for the Outside: 18 Weeks in the Life of an Unborn Baby

At the halfway point of the pregnancy (20 weeks gestation), the baby’s sex is visible by ultrasound and and he or she is at least partially protected from murder in the womb.

At 18 weeks after fertilization (gestational age 20 weeks), the unborn child is rapidly getting ready for life in the outside world. While the pregnancy is only at its halfway point, most babies at this point are only a few weeks away from being able to survive if born as a “micro-preemie.” In fact, some have been able to survive at this stage.

The baby’s skin has two distinct layers: the dermis and the epidermis. This delicate skin is protected by a layer of fine hair called lanugo and the protective coating of white vernix, held in place by the lanugo. 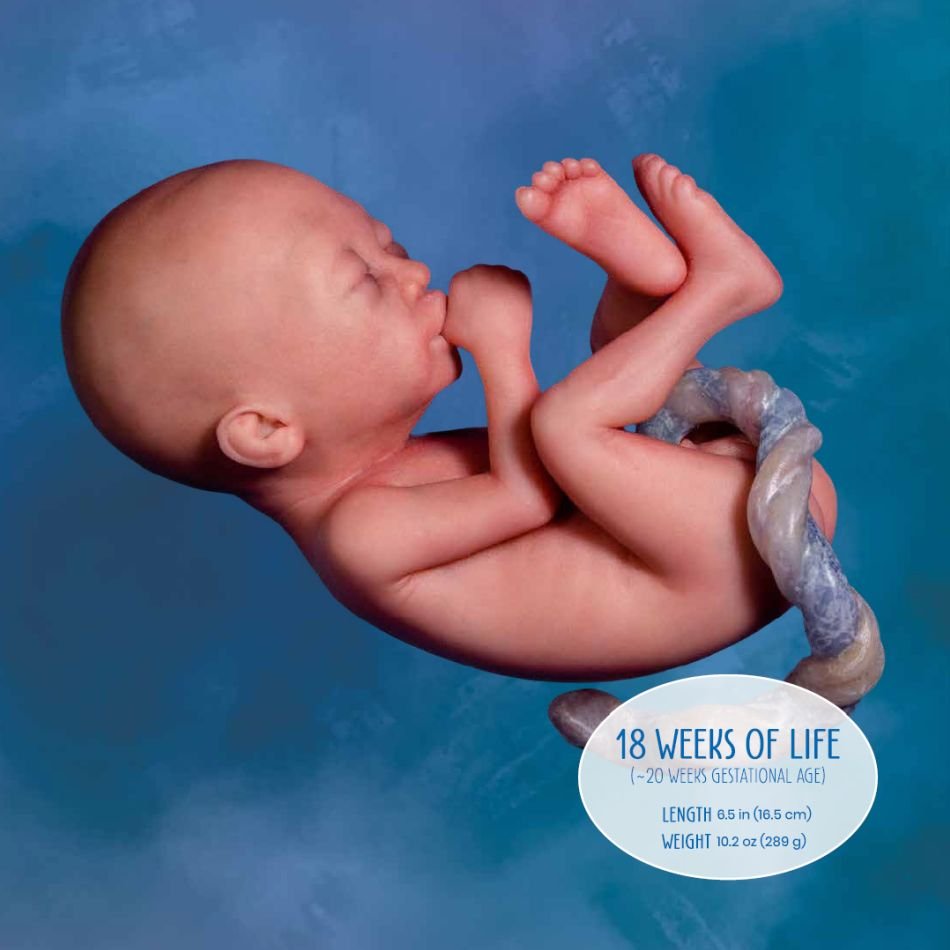 The mother is likely noticing that pregnancy hormones are giving her stronger nails and thicker hair. The pregnancy is often noticeable by this point, and the mother can likely feel the movements of her child in the womb. The baby is only 6.5 inches tall, so there is still plenty of room to move around.1

The pregnancy is often noticeable by this point, and the mother can likely feel the movements of her child in the womb. The baby is only 6.5 inches tall, so there is still plenty of room to move around.

This point in the baby’s life is important for another reason: in many states in the US, he or she is now at least partially protected from abortion. However, some states have no cap on the point at which an unborn child can be murdered in the womb, and women who are determined enough may travel to these states to obtain one.2 While abortion is sinful at any stage of pregnancy, the advanced stage of development of the baby, only a few weeks away from being able to survive in the outside world, makes abortion at this stage even more obviously wrong to anyone willing at all to honestly consider the facts. A woman at this (and any other) stage of pregnancy who finds herself unable or unwilling to raise a child at this point in her life should instead commit to the life-affirming option of adoption, blessing another waiting family and giving her innocent child the opportunity to live and grow.

What a joy the arrival of a child brings, whether he or she is brought into the family by birth or adoption at just a few days or some years old. Children fill rooms with laughter, sound, and happiness! They smile, make funny faces, and fill our days and years with so much adventure! How much excitement for the days ahead, for everything the whole family will learn, and the growth that this new challenge will allow. Truly, what a joy! God uses children to shape the way we see and live life and, mainly, to shape us like his Son. Jesus tells us in Mark 10:13–15 and in Matthew 18:1–4 how children can teach us the truths of God, and for many families, adoption gives this amazing teaching opportunity. Adoption is an amazing pro-life option for families who have room in their hearts to add another member.

And, sadly, children are sometimes removed from their families for their own safety and often languish in the foster care system. Based on a statistic published in 2021 by Statista Research Department, there are around 122,000 children available and waiting to be adopted.3

God can use adoption to improve the lives of such children, the same way he adopted us to save us and give us eternal life.

Children need attention, care, love, and stimulation to grow and develop well. Children need parental guidance and care: they need a family. Without these things, children can grow up with emotional and cognitive disabilities, and statistics show higher rates of unemployment and criminal conviction, among other problems.4 But God can use adoption to improve the lives of such children, mirroring the way he adopted us to save us and give us eternal life. And there are over 1 million abortions every year. Adoption can save those lives as well.

The Bible tells us about some stories of adoption.

He dealt shrewdly with our race and forced our fathers to expose their infants, so that they would not be kept alive. At this time Moses was born; and he was beautiful in God’s sight. And he was brought up for three months in his father’s house, and when he was exposed, Pharaoh’s daughter adopted him and brought him up as her own son. (Acts 7:19–21)

When the child grew older, she brought him to Pharaoh’s daughter, and he became her son. She named him Moses, “Because,” she said, “I drew him out of the water.” (Exodus 2:10)

The queen Esther was raised by her cousin, Mordecai, who took her as his own daughter when her mother and father died.

He was bringing up Hadassah, that is Esther, the daughter of his uncle, for she had neither father nor mother. The young woman had a beautiful figure and was lovely to look at, and when her father and her mother died, Mordecai took her as his own daughter.” (Esther 2:7, emphasis added)

Here we see Mordecai living out the verse in James 1:27: “Religion that is pure and undefiled before God the Father is this: to visit orphans and widows in their affliction . . . .”

Jesus was adopted by an earthly father. Mary “was found to be with child from the Holy Spirit” (Matthew 1:18). Joseph took care of Jesus as his own son.

Believers are adopted! That is the most beautiful story of redemption.

Believers are adopted! That is the most beautiful story of redemption. Christians are sons and daughters, adopted by God, “to redeem those who were under the law, so that we might receive adoption as sons” (Galatians 4:5). He did that through Jesus: “he predestined us for adoption to himself as sons through Jesus Christ, according to the purpose of his will” (Ephesians 1:5).

Adoption is the Christian story of the eternal redemption: “But to all who did receive him, who believed in his name, he gave the right to become children of God” (John 1:12). It is also a story of earthly rescue, raising children to love and obey the Lord, their Creator.

Previous Article Eyes in the Womb: Week 11 in the Life of an Unborn Baby