Moving Around: Week 21 in the Life of an Unborn Baby

What we know about an unborn baby’s head, body, skin, hair, weight, hearing, and movement 21 weeks after fertilization

At 21 weeks after fertilization, a child has “looked like” a baby for quite a while, even though it is only just past the halfway point of the pregnancy! A baby born at this point can sometimes be saved by advanced medical care.1 The more premature a child is, the more likely he or she is to suffer disabilities and medical problems as a result. But as medical treatment improves, so does the prognosis for such “micro-preemies”!

The baby’s head, body, and limbs now appear to be in proportion to each other. All the organs have developed and are in the process of maturing. The skin is paper-thin and looks loose because the fat has not yet developed under it. The baby’s bones are visible through the translucent skin. In the next few weeks, collagen will make the baby’s skin more opaque and ready for the outside world. The baby also has developed a layer of fine hair, called lanugo, that will fall out within the first few weeks after birth. The baby’s head of hair has also started to come in. Some babies are born with a thick head of hair, while others are completely bald at birth and may even stay that way for months! 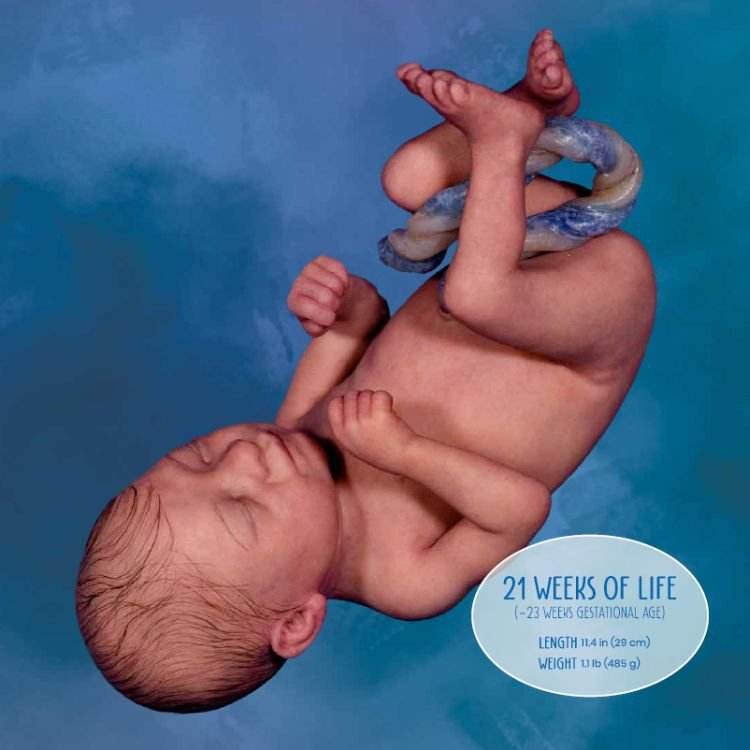 Model from the Creation Museum’s Fearfully and Wonderfully Made exhibit and book.

The 21-week-old baby is around 1.1 pounds, 11.5 inches long, and will double in weight over the next month. At around this point, the mother’s body responds to the growing baby by expanding her rib cage to accommodate the baby bump. This is also around the time when women may start to see stretch marks.

A mother at this point can feel her baby’s movements and may even be able to discern her baby’s “routine,” as the baby will be more active at some times than others. She may also notice that the baby reacts to hot or cold beverages and is more active after she eats. Unfortunately, the baby’s routine may be very different from Mom’s! Often, a mother will notice her baby gets active just as she is preparing to settle down for the night.2 This is because when the mother is busy and active, her movements rock the baby to sleep. When she stops moving, the baby wakes up!3

The baby also is able to hear sounds from the outside world but can only hear lower-pitched sounds like a man’s voice or a dog barking. The baby also begins practicing breathing and swallowing. An ultrasound sometimes catches babies at this stage sucking their thumbs.

Every week, the baby becomes more recognizable as a person in his or her own right. The physical and developmental milestones doctors track after birth are the natural continuation of processes that began at fertilization.

Every week, the baby becomes more recognizable as a person in his or her own right. The physical and developmental milestones doctors track after birth are the natural continuation of processes that began at fertilization. The “cuter” the baby looks, and the more developed he or she is, the more likely people are to grant him or her rights separate from the mother. Even many people who would have granted the mother the “right” to kill the baby in the first trimester are squeamish about ending his or her life at this late stage of development. However, the baby’s personhood and value were determined at fertilization, not over time as a result of further development.

In the Bible, we can see the baby’s value in the old covenant. If an unborn baby dies as a result of a physical altercation, the baby’s life is considered to be the same worth as an adult as seen from the death penalty for the brawler (Exodus 21:22–25). God established the personhood of unborn children, like those in the 21st week of development, millennia before 21st-century modern medicine.