Eyes in the Womb: Week 11 in the Life of an Unborn Baby

In 1956, in Glasgow, Scotland, the first obstetrical ultrasound was performed,1 giving doctors eyes into the womb for the first time in history. Using flaw-detection technology borrowed from, of all places, the shipping industry, a pro-life obstetrician and an engineer invented the first ultrasound prototype, the Diasonograph, publishing their images in 1958 in a medical journal.

Fast forward a few decades, ultrasound technology is a routine part of prenatal care, with most mothers enjoying at least two (often more) glimpses of their unborn child: a dating ultrasound at 8–12 weeks and an anatomy scan at 18–22 weeks gestation. The grainy images taken in the 1950s have been replaced by crisp black-and-white images, or even 3D images, that clearly show off every feature of the unborn child from his tiny button nose to ten little toes.

Just a few months ago, I had my dating ultrasound at 11 weeks for my fourth child. Our baby, about the size of a strawberry, was very active, twisting, kicking, and somersaulting—yet so incredibly tiny! It’s truly a breathtaking experience. 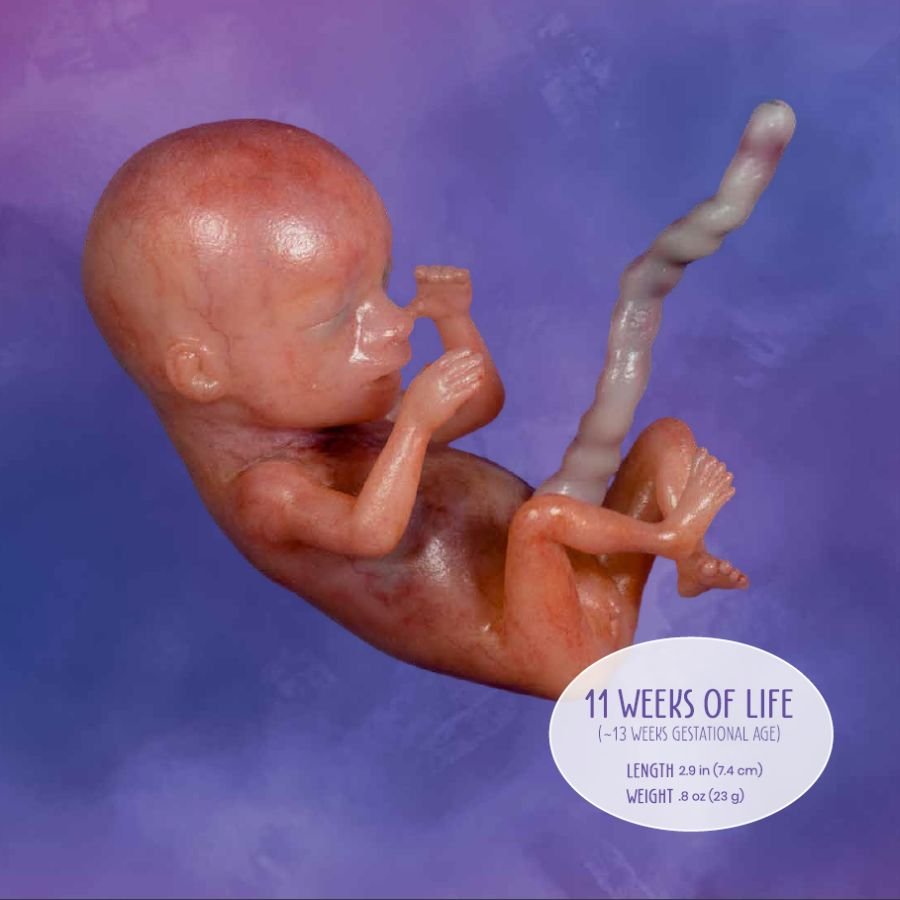 So, now that we can “see” into the womb, what’s going on in there? At 11 weeks, the unborn baby is only about 1.6 inches (4 cm) long and barely tips the scales at .2 ounces (7 grams). But, despite the diminutive size, the baby is already moving and kicking, though mom can’t feel it quite yet.

At 11 weeks, the unborn baby is only about 1.6 inches (4 cm) long and barely tips the scales at .2 ounces (7 grams). But, despite the diminutive size, the baby is already moving and kicking, though mom can’t feel it quite yet.

At this stage of development, half of the baby’s body length is his or her head, though that little torso is about to hit a growth spurt and will assume a straighter posture as well. Fingernail and toenail beds are developing, and tooth buds are appearing in the gums. Bones are getting harder, hair follicles are forming, and the baby even has a tiny tongue and palate in his or her mouth. Also, around this time, the ears begin migrating to their final destination on the sides of the head, and the nasal passages are opening. If the baby is a girl, her ovaries are developing (she will be born with all the eggs she will ever have!).

Whew! No wonder mom usually feels exhausted during this stage of pregnancy. It’s a hive of activity in the womb as the baby races towards the due date.

At the 11-week (or so) dating scan, many mothers will choose to have a nuchal translucency test (NT) performed at the same time.2 This noninvasive test measures the fluid at the back of the baby’s neck during the ultrasound, screening to see if the baby is statistically more likely to have Down’s syndrome or other chromosomal abnormalities. This test is only about 70% accurate.

Although numbers in the US are hard to ascertain,3 it appears that roughly 67% of mothers and fathers who receive the news from this test that their child might be born with Down’s syndrome, combined with or without further genetic testing, will choose to have their unborn child killed through an abortion. According to the Charlotte Lozier Institute:

Abortion after prenatal diagnosis has reduced the population of individuals living with DS in the U.S. by approximately 30%. This should not be confused with the percentage of women who abort following a prenatal diagnosis. That number would certainly be higher. This reflects the overall reduction in the DS population, and takes into consideration total DS pregnancies, whether prenatally diagnosed or not.4

But, even if this test were 100% accurate, is a prenatal diagnosis of a chromosomal abnormality an acceptable reason to have a child killed? Certainly not! This is a shocking form of discrimination against the most vulnerable and treats life as if it only has value if the child will be “healthy” or able-bodied.

But, even if this test were 100% accurate, is a prenatal diagnosis of a chromosomal abnormality an acceptable reason to have a child killed? Certainly not!

Would those who promote or turn a blind eye to the killing of an unborn child due to an unwanted prenatal diagnosis likewise ignore a parent murdering their newborn or two-year-old or ten-year-old because they were born with a chromosomal abnormality or became disabled in some way later in life? Likely not!

Such a utilitarian view of life should not exist among believers who should see each life as fearfully and wonderfully made by God (Psalm 139:14) in his image (Genesis 1:27) and precious to him, trusting God to provide everything we need to parent whatever child he graciously brings into our lives.

As the inventor had hoped, ultrasound technology has saved countless lives, giving doctors the ability to catch and fix problems before the baby is born, including even prenatal heart surgeries!5 And pregnancy care centers around the country routinely report that four out of five abortion-minded women chose life after seeing their unborn baby on the ultrasound screen and receiving the love, support, and help offered to them.6

But, sadly, this technology has also resulted in countless lives being lost as many parents who receive an unexpected diagnosis from their genetic screening will ultimately choose death for their unborn child. How utterly tragic!

How Valued Are We? Look to the Cross

The value of human life isn’t determined by the perceived quality of life, what an individual can contribute to society, or how “healthy” that life will be. One need only look to the cross of Jesus Christ to see how valuable a human life is! While we were yet sinners—helpless, dead in our sins and at enmity with God—Christ came and died for us (Romans 5:8), freely giving his very life that we might have new life. And he didn’t do it because of anything in us. He did it because of the great love with which he loved those he created in his very image (Ephesians 2:4; Genesis 1:27).

The value of human life isn’t determined by the perceived quality of life, what an individual can contribute to society, or how “healthy” that life will be.

As believers, we are called to have the same mindset as our servant Lord, welcoming the little children (Matthew 19:14; Mark 9:37) as gifts from him (Psalm 127:5) and being willing to lay our lives down for someone else (John 15:13). This includes speaking out and defending those who cannot speak for themselves (Proverbs 31:8).