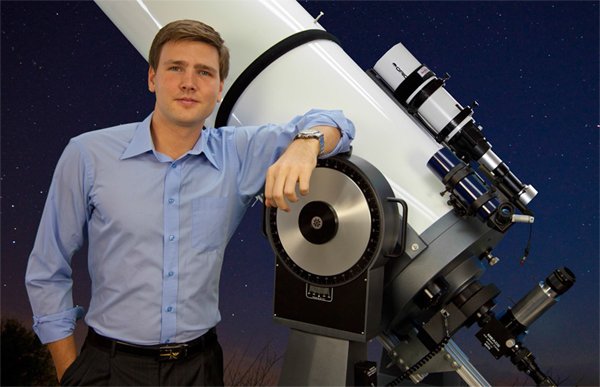 An interest in astronomy developed into a passion that opened doors David Rives never expected.

David Rives can hardly believe that simply following his passion to share creation’s wonders has landed him, at the age of 26, a weekly television program with a worldwide audience. On the elaborate set of Creation in the 21st Century, David interviews well-known creationists and gives a clear presentation of the message of Genesis and the gospel, which is broadcast on the world’s largest religious TV network.

When he acquired an observatory-class telescope a few years ago, David had no idea his lifelong fascination with astronomy would take such a dramatic turn. “When I saw things like the Great Orion Nebula in all of its glory, I said, ‘I can’t keep this to myself. I have to share this with other people!’” That passion led initially to a speaking ministry in churches and at creation conferences. David says that although he had to deal with a “learning curve,” he’s a very social person and wasn’t particularly nervous about speaking in public. “If you have a message worth presenting, there’s nothing to be afraid of.”

As he shared the wonders of astronomy, David began to realize that evidence of God’s glory is everywhere. His interests expanded, and he began to emphasize that every field of scientific study reveals the Creator’s hand. As God led him and provided the resources, David continued expanding his efforts. In 2007, at 19, he Creation on TV produced the first of two creation documentaries—which have been translated into several languages—based on the research he was doing for his presentations; and he published his first book when he was 25.

But God had even more planned for him. After David sent some of his material to the Trinity Broadcasting Network, the CEO called him personally and asked him to host a biblical creation show that would be carried by thousands of TV stations all over the world. They even had a crew and a set already in place. Within minutes of the show’s debut in January 2014, David’s ministry website began receiving such a flood of enthusiastic feedback that the volume of email almost crashed the servers.

David continues his speaking ministry, in addition to the ministry’s website and YouTube channel; and two years ago he added songwriting and recording to his outreaches. When asked why he decided to build a whole ministry on creation, he answers, “If you can’t believe the very first verse that tells us ‘In the beginning God created’ and He did it in six days . . . then what else do you compromise on? Jesus Himself said, ‘If you had believed in Moses, you would have believed in Me, for he wrote of Me. If you believe not his writings, how can you believe My words?’ We’re giving people encouragement to believe what the Bible says from beginning to end, not just select pieces.”

Orion in the Bible (segment from In the Beginning)

Previous Article Cosmos in the Classroom Next Article Commitment to Creation: Interview with Dr. Ed Hindson