Time to Square with Hollywood about Noah

It’s the number one movie in America, but Noah is far from being first in Hollywood for biblical fidelity in the long history of Bible-themed films. That opinion actually squares with the view of the film’s cowriter and director, Darren Aronofsky, who admitted that his Noah movie was “the least biblical biblical film ever made.”1

The way in which Aronofsky’s Noah blasphemes God, maligns the character of a righteous man, adds pagan and mystical elements, and twists the biblical narrative has prompted AiG to alert the church and culture about this unbiblical movie (see our detailed review of the film.) 2 AiG’s latest public effort to expose the film’s unbiblical content is a billboard campaign launched this weekend in the media centers of Times Square (New York City) and Hollywood itself. Here is an artist’s depiction of how the “Meet the Real Noah” board looks in Times Square as we await receiving an actual photo (we used this same space last year to reach out to atheists and promote our website). 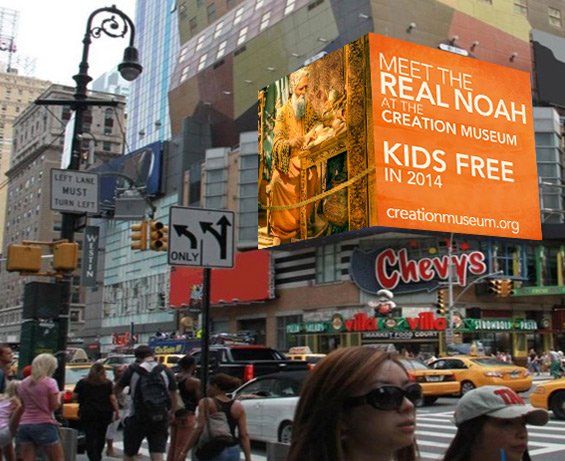 In Los Angeles/Hollywood, California, eleven of our “Meet the Real Noah” billboards went up this weekend. As AiG President Ken Ham declared in his TIME magazine review of the Noah film, “We have an obligation to send out a warning, and in so doing also to communicate biblical truths and undo the possible damage that might be caused by this sci-fi fantasy—one that is making a mockery of the word of God and its true account of Noah, the Flood and the Ark.”3 He added that Aronofsky’s Noah was “a boring 2½-hour movie, [and] it may be the worst film I’ve ever seen.”

Get Equipped to Discuss the Real Noah

To read articles and watch AiG’s video review of Noah, go to CreationDebate.org. You can also order the new Ray Comfort and Ken Ham DVD set Noah and the Last Days about the real Noah (offering a defense of the historicity of Noah’s Flood and Ark) and see the huge discount we are offering if you buy multiple copies in our online store.

For a limited time, if you purchase an adult Creation Museum ticket online, we will supply you with a code that will give you a free digital download of Noah and the Last Days (suggested ages 12 and up) and a copy of The Answers Book for Kids, Volume 2. The free digital video by Ray Comfort also includes Ken Ham’s Creation and the Last Days video. As you buy an adult admission ticket, plan to bring some children with you to the museum. Our free kids admission to the museum program continues through 2014. So, bring as many kids as you can. We had 2,000 visitors to the museum on Friday and over 2,000 on Saturday, for which we praise God—especially as we saw so many children walking through the museum!

Please pray for this advertising campaign going on this weekend and Monday with billboards posted in and near Hollywood and in New York City, and also for web banners being placed on a few Christian websites throughout the week—on the well-trafficked website of ChristianPost.com as well as on ChristianityToday.com, and RelevantMagazine.com.

It is our duty as Christians to tell people the truth about Noah and the account of the Flood in the Bible, and not see the book of Genesis undermined by Hollywood. Our future full-size Ark will also help proclaim the truth of the Bible’s very first book.

Please forward this article to your church leaders and encourage them to bring youth to the Creation Museum and meet the real Noah! 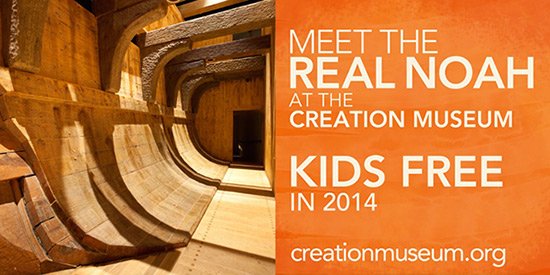 With the Times Square billboard, people will see three different images: the one at the top of this article and the two here.