The Star Movie: The Greatest Story Ever Told?

If you visit The Star movie’s website, you’ll read the following:

In Sony Pictures Animation’s The Star, a small but brave donkey named Bo yearns for a life beyond his daily grind at the village mill. One day he finds the courage to break free, and finally goes on the adventure of his dreams. On his journey, he teams up with Ruth, a loveable sheep who has lost her flock and Dave, a dove with lofty aspirations. Along with three wisecracking camels and some eccentric stable animals, Bo and his new friends follow the Star and become unlikely heroes in the greatest story ever told—the first Christmas.1

The closing credits echo the “the greatest story ever told” idea as well, stating that although artistic license (and copious levity, I may add) was used, that those involved did try to stay true to the account. 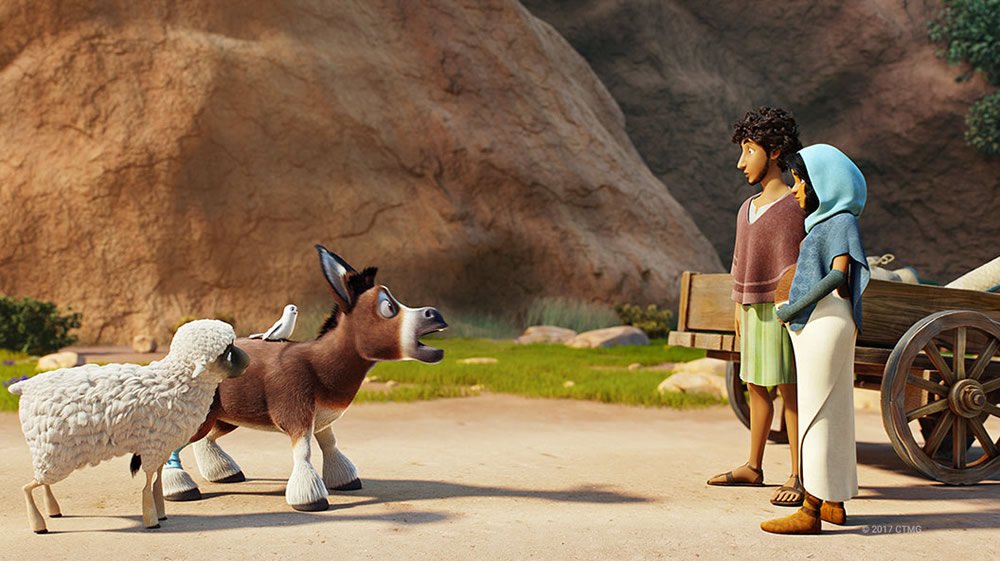 Bo the donkey and Ruth the sheep try to communicate with Joseph and Mary in The Star. Image by Sony Pictures Animations, via TheStarMovie.com

After seeing some flippant previews, I did a bit of homework to see who made the movie before I went to see it. It is distributed by Sony Pictures, with production companies Columbia Pictures, Sony Pictures Animation, The Jim Henson Company, Franklin Entertainment, Walden Media, and Affirm Films (a Sony company). I was encouraged to see that the latter three production companies are attempting to tap into the Christian/religious entertainment market by producing films with more family values and Christian themes with less objectionable content than typical movie fare. Also, of note, many of the voice actors claim to be Christian or have a Christian background.

As is the case with any retelling of a historical event, one runs into the problem of filling in the details that the historical record itself does not include but are necessary for a full plot and characters that can connect with the audience. With biblical narrative, even the well-meaning storyteller also risks the more serious problem of making the story just that: a story and not the dissemination of the life-changing, inerrant Word of God. And certainly with a story so important to be called “the greatest story ever told,” it is important to get the essential parts of the account correct and to treat it with proper respect. This “greatest story” is not just about any king, but the King of Kings and the Creator himself.

This “greatest story” is not just about any king, but the King of Kings and the Creator himself.

As far as getting the essential aspects of the biblical account correct, I’ll have to say that the film fares about as well as many. There is the common misconception that Mary travels so close to her delivery that they cannot find a room in time and must go to a barn.2 And of course there are three wise men on camels that arrive in Bethlehem the night Jesus is born.3 Though there are many arguably minor timeline and historical fact discrepancies, such as Herod rather than Augustus Caesar issuing the order for the census, the most plot-significant disruption of the actual events recorded in Scripture is the relentless pursuit of Mary by Herod’s henchman, who would have murdered her as she carried the Child. Because the movie incorrectly timed the Magi’s visit to King Herod well before Christ’s birth, the plot to kill the newborn King was hatched much too early.

The film includes many slightly paraphrased or abbreviated biblical quotes, and there seems to be no apology in referring to the Baby to be born as the King, the Messiah, the Son of God, and Jesus. Mary and Joseph are refreshingly portrayed as an admirable and affectionate couple with all-too-human qualities of becoming overwhelmed in their unusual circumstances and praying for God’s help and guidance to do what they need to as part of his plan. Since the tale is largely focused on the animals, in particular the donkey Bo (short for Boaz—who does meet up with a sheep named Ruth), other humans in the film are pretty sparse. Near the beginning, there is a brief scene with Elizabeth and Zechariah, while Herod and his unnamed henchman, along with their two rough-looking dogs, are the villains.

The Story Outside the Story

The focus on the animals was intended to be a “new perspective” on the main story of Christ’s Advent, but is distracting from the main point of the biblical account. However, small children will enjoy the animal characters, and the film makers attempted to have the animals develop and be affected by the Advent as well. The sheep, Ruth, left her flock to follow the Star. The camels knew the Star meant something important—one even suggested it was because of the coming of the Son of God. The “bad dogs” become changed upon viewing the babe in the manger, one saying “Are we good dogs now?” but then the other, to my disappointment, said, “We have to try.” Of course an encounter with Christ is life changing, but it is he who takes us as we are (Romans 3:12) and changes us and enables us to be good like he is (Mark 10:18).

The biblical account remained intact, though not without a few problems.

And we have to address the levity the animals brought to the film. The zany antics of the animals may be disturbing to those who feel that they should not be part of a biblical account or even “story.” The trailers, honestly, made me concerned that the treatment of the biblical account would be lost or perverted to such an extent that I would object to the movie in its entirety. Since the biblical account remained intact, though not without a few problems as already mentioned, the antics remained a story somewhat outside the biblical story that, according to those involved, they did try to preserve. It is encouraging that some major movie production companies and some well-known actors took Scripture seriously enough to want to recount and remain true to what even they call “the greatest story ever told.”

Of course, we’d encourage anyone wanting to read the true eyewitness account of the “greatest story ever told” to start in Genesis to understand the problem Jesus came to earth as a baby to solve, but as we celebrate the Advent of our Lord next month, we also encourage you to read Luke for the fullest Scriptural account of Christ’s birth.

And as we celebrate our Lord’s birth, we need to remember that he did not remain a babe in the manger. He lived as we do on this earth in his human form until he suffered the ultimate penalty for our sins on the Cross. He came as a man to die. But the story doesn’t end there either. He rose and is now seated at the right hand of the Father, and someday he will return to gather his people. Have you been changed by this greatest story ever told?

He left His Father’s throne above,
So free, so infinite His grace;
Emptied Himself of all but love,
And bled for Adam’s helpless race. . . .

No condemnation now I dread;
Jesus, and all in Him, is mine;
Alive in Him, my living Head,
And clothed in righteousness divine,
Bold I approach th’ eternal throne,
And claim the crown, through Christ my own.

Amazing love, how can it be?
That thou my God wouldst die for me?4