Jurassic World is being released in North America today, although several of the Answers in Genesis content team were able to attend a pre-release last night. Based on Michael Crichton’s novels, the most famous of which is the 1990 bestseller Jurassic Park, this movie is not a screen adaptation. Although Crichton died in 2008, his legacy and ideas have lingered, primarily because of the success of the movie version of Jurassic Park, which helped spawn two more movies, one based on his Lost World novel. This new screenplay, suspected to be the beginning of a new trilogy, did leave room for sequels, as will be discussed.

The movie opens to a closeup of a dinosaur foot tearing open an egg in what is, perhaps ironically, called the Hammond Creation Lab, but without the aid of Hammond, who has apparently died in the interim between the failure of Jurassic Park in 1992 and the movie’s Jurassic World theme park opening in 2005. In a bait-and-switch technique meant to surprise the moviegoer and subtly reinforce dino-to-bird evolution, the next scene shows a similar-looking foot stomp heavily into snow. The camera pans up to reveal a bird somewhere considerably north of where the dinosaurs are hatching in Jurassic World, which lies on Isla Nublar near Costa Rica. Young Grey and older brother Zach are snowbirds heading there to meet their Aunt Claire, who is the park operations manager, for the thrill of their young lives.

The park has enlisted many security measures and has been operating safely for 10 years, but investors, including military, have been pushing park officials to test the boundaries.

Upon arrival, Claire is busily working with investors to unveil the newest monstrosity the genetic engineers at Jurassic World have been working on that is “bigger, louder and with more teeth.” Thus, Claire is unable to accompany her nephews on their tour, enlisting instead her assistant to “babysit.” Indominus rex, hereafter called I. rex, lives up to its name as the “most fearsome dinosaur ever to be displayed at Jurassic World”1—except the park isn’t quite ready to introduce her to the public yet, and in fact, the financier Masrani requested raptor-whisperer Owen Grady to ensure the paddock and display area are safe for visitors. I. rex has other ideas apparently. Clearly intelligent and violent, I. rex requires special containment, as the raptors do.

In an unbelievable (and one could say almost human) display of intellect and abilities, I. rex does manage to escape, devouring a few park employees in the process. Owen’s keen understanding of similar behavior in raptors makes him uniquely suited to the position of helping the park keep the visitors safe. His suggestions are often ignored for more conservative measures that would keep an oblivious crowd and investors from ever hearing of such a breach, causing the attempts of park security to be woefully inadequate, such as using stun guns and nets in the first attempt, resulting in the most violent scene in the movie.

The movie then launches into a “perfect storm” of sorts where everything that can go wrong does, much like in Jurassic Park, but without the invocation of Chaos Theory that Ian Malcolm predicted in the original novel. In fact, the movie itself is generous with references back to the original movie. In a close parallel with Jurassic Park, it is now Claire and the park manager’s nephews, rather than Hammond and his grandchildren, that are somehow always in harm’s way, with Owen Grady suggesting that their problems are due to seeing these thinking, feeling, and hungry animals as “assets.” Perhaps that is why Claire and Owen stop and spend time mourning the last few moments of an Apatosaurus victim of I. rex’s rampage while on the way to rescue the nephews out on their own in a bulletproof but not quite dinosaur-proof gyroball. The children do eventually make it back through their own ingenuity (and a few more “suspend disbelief” mechanisms). Concurrently, more aggressive orchestrated dinosaur containment measures are employed and result in failure, including a breach of the aviary that sends Pteranodons and Dimorphodons fleeing in terror toward the still-unsuspecting park visitors. Upon seeing the panicking crowd, apparently the flying reptiles switch from flight to feed and begin attacking the visitors. The park’s security quickly contains this relatively small threat compared to what’s coming.

It becomes obvious that drastic and objectionable measures need to be taken to stop I. rex’s continual march toward park guests, spurred by its thermal sensory and camouflage abilities, despite the several-mile distance and tropical climate, which would seem to negate these abilities. Trained Velicoraptors are brought in to hunt I. rex, resulting in even greater catastrophe but buys enough time to get the park visitors to safety. In the climax, T. rex is employed as well, and for those curious as to how I. rex compares, it could be likened to a heavyweight vs. a middleweight boxer. Trying to keep spoilers to a minimum, we’ll say it’s a super-heavyweight that wins the match. The survivors of the fight, including a raptor and Owen, Claire, and the boys, walk away from each other in seeming mutual respect. Other survivors evacuated from the island include many of the park workers, such as the lab personnel and frozen dinosaur embryos of undisclosed variety. Most of the animals are assumed to be now open to survival of the fittest as at least some of the protected areas for herbivores had been breached by the I. rex and other carnivores are on the loose.

“So Preoccupied with Whether or Not They Could”2

I. rex is another example of genetic engineering gone wrong for the wrong reasons, but how far-fetched is her existence and ability? All the animals in the movie are a composite of old “original” DNA and new from other existing species like frogs to fill the gaps, just like in Jurassic Park—but apparently in this movie to imbue the recipient with specific abilities, some more hard to believe than others. The movie keeps it a secret until nearly the end just what I. rex is made of. We’re told she’s part T. rex at first, but then Dr. Wu, the lead geneticist since the beginning even in Jurassic Park, reveals cuttlefish for chromatophores and camouflage along with tree frog DNA for thermal output, explaining partly its ability to evade detection in its paddock and in subsequent attacks. According to the fictional but functional Jurassic World theme park website, she is also made up of a composite of DNA from several more carnivorous dinosaurs. The source of the Godzilla-like monster's unbelievable intelligence was left a mystery until nearly the end, but when revealed, it was still a stretch, given its ability to accurately anticipate the actions of humans. Its communication abilities seem the most far-fetched as this is a multifactorial ability, and in fact, seemed to surprise those that knew about her.

Dr. Georgia Purdom, geneticist at Answers in Genesis, and who has seen the movie, has this to say about the viability of their proposed techniques:

They treat the genome like a genetic “smorgasbord” in which you can just pick and choose the traits you want from one organism and splice them into the genome of another organism. The genomes of living organisms are extremely complex with nearly all of the human genome (and very likely this applies to other living things as well) considered functional with very little of the genome being non-functional “junk” DNA. By inserting large genetic regions for traits such as communication and intellect, unimaginable damage would likely occur as the base T. rex genome is interrupted. Not to mention that epigenetic markers (chemical markers on DNA that regulate it) would very likely be incorrect.

What Did We Learn?

One of the “bad guys”—a military antagonist who is all for a violent super-beast to use for warfare—had one of the most relevant lines of the movie shortly before his violent death: “Millions of years of evolution and what’d we learn?” He seemed to mean that humans should benefit from exploring—without limit—the options available to us in genetic engineering. Apart from the “millions of years” line, we would see this as the opposite: given man’s history, which is the entire history of the world, what’ve we learned? Man is prideful and rebellious against his Creator and easily corrupted by power. While genetic engineering can be beneficial, reckless use has already led to horrors including human-animal hybrids.3 Lack of restraint has already been demonstrated, regardless of the unlikeliness of the monsters of this movie.

The movie has a clear bent to treating the dinosaurs as if they are of equal value to humans. Given recent attempted legislation for things like chimp rights,4 this is not too far off base, all while ironically ignoring human embryos’ rights. Additionally, bonds between humans and the dinosaurs in the movie—particularly the raptors—seemed a bit forced, yet tenuous. Owen’s connection to the raptors via imprinting insinuates a connection between dinosaurs and birds, although that is not a huge factor in the movie5—in fact the movie has been criticized for its lack of feathers on the dinosaurs.

We couldn’t help but notice a few aspects of Jurassic World that reminded us of the Creation Museum. There is a photo-op with a saddled triceratops and rides (of course their triceratops actually move!). The lab where they employ intelligent design to piece together DNA fragments and come up with their monstrosities is called the Hammond Creation Lab. And there is a striking resemblance of their kids’ “Excavation Exploration” and our “Dig site,” both pictured below. Naturally, if dinosaurs are your “worldview evangelists,”6 commonalities will exist! 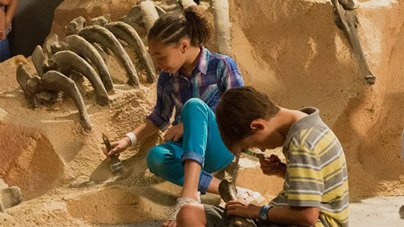 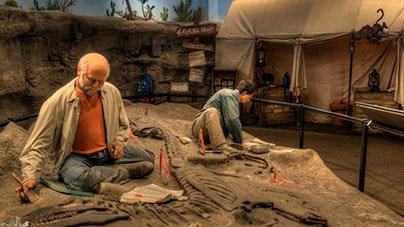 We believe the image on the left to be a movie screenshot of children at a Jurassic World exhibit that was used on the fictional Jurassic World website. Compare to the “The Dig Site” exhibit (right) at the Creation Museum (note, however, that the people are not “real” in our display).

Of course, the Creation Museum, unlike the movie, does not contain objectionable content, unless you’re one who absurdly claims that teaching children that the Bible is true is “child abuse.”7 The moviegoer would need to be aware that this PG-13 movie has some gore, a lot of violence, sensuality, and objectionable language (Christ's name taken in vain), however. Although the evolutionary content of the movie is not overwhelming, the movie, though visually captivating, contains far too much violence for a child and for sensitive individuals. For more information, see Ken Ham’s blog about the movie.