“Why Won’t They Listen?”

by Timothy Wallace on May 5, 1999
Also available in 한국어
Share:
Email Using:
Gmail Yahoo! Outlook Other 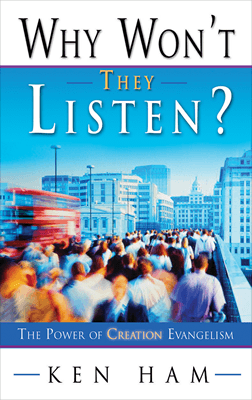 Read the book for free online.

This little book goes far in addressing a critical weakness in contemporary Christian theology. It ought to be a must-read for Christians who serve in leadership roles “from pastors to parents” as well as those involved in evangelism and apologetics ministries. While the theme isn’t necessarily something new from Ken Ham, it may well be his most concise and best articulated rendition of a vital message to today’s Christian community.

Ham addresses a variety of aspects of the biblical creation record and its importance, focusing mainly on two fundamental points: 1) That the historical, biblical Christian faith rests and relies squarely and unequivocally on the historicity and straightforward meaning of the Genesis record; and 2) That the Great Commission will not be effectively obeyed” whether among “unreached” peoples throughout the world or in contemporary post-Christian Western culture’unless this foundational element of the Gospel is again given its proper place.

Biblical Help for a Schizophrenic Theology

Creation Evangelism [Now titled Why Won’t They Listen?] explains in straight forward terms exactly why the Genesis record is so critical to a sound, biblical theology. Christianity’s historical and moral foundation is commonly rejected not only by skeptics, but (perhaps unwittingly) by many Christians as well, who thus abandon the vital historical meaning and basis supplied by Genesis to the whole of God’s Word’and thus the very Gospel itself, by which they profess to be saved.

Content to view the history documented in Genesis record as of “secondary” importance, believers are prone to adopt many popular notions of the naturalistic, humanistic (if not outright atheistic) worldviews that dominate the majority of human thought around the globe’and which are outright logical contradictions to the fundamental principles of the Christian faith.

Concurrent with this, contemporary philosophy in technologically advanced cultures has influenced many Christians to place more confidence in human science than in the Creator. Yet they are largely unwilling to face the schizophrenic nature of the worldview they’ve consequently adopted, and they’re left anywhere between a form of intellectual paralysis and dogmatic defense of their “scientific” compromise with God’s Word.

Ham recognizes that because present generations find themselves in “a world full of wonderful technology that is an outgrowth of real science, they have a great respect for what is called science.” Regrettably, the popular” but erroneous” belief that “evolution is science” subsequently persuades them to assume there’s something wrong with the Bible.

Sadly, only a minority of professing Christians seem to really seek God’s leading in this arena, inevitably risking hardened hearts in their pursuit of any agenda other than humble and complete obedience to the Word of God. It is surely possible to serve one’s Master without accepting His Word unconditionally, but not without invoking a moral double standard in order to simultaneously embrace elements from two such antithetical viewpoints. Creation Evangelism does a splendid job of gently presenting this challenge to the reader in a simple’but by no means simplistic” manner.

Recognizing Western culture’s undeniably post-Christian basis, in Creation Evangelism Ham defines the two fundamental types of hearers of the Gospel: In the time of the apostles as well as today, there are “Jews” (who readily accept the authority of the Scriptures, but have no true understanding of who Jesus Christ is), and “Greeks” (who subscribe to any philosophical/theological perspective except that contained in Scripture, and therefore have no basis from which to comprehend the Gospel of Jesus Christ).

The world today (including the formerly Christian West, where the last vestiges of biblical morality and theology are by and large fading fast) is mostly populated with “Greeks.” Ham rightly recognizes this, and suggests that modern evangelism efforts nearly everywhere would benefit from the laying of a proper foundation. This involves establishing the space-time historicity of the biblical Creation account, as well as the vital history of the Fall, the Curse of death, and the Flood of judgement upon antediluvian man. To treat these elements of history as “secondary” (or worse) is to build a “Christian” belief system without foundation, says Ham.

Ironically, the critical nature of these doctrines to Christianity, while apparently “missed” by so many professing Christians, has not been lost on certain astute atheists:

“It becomes clear now that the whole justification of Jesus” life and death is predicated on the existence of Adam and the forbidden fruit he and Eve ate. Without the original sin, who needs to be redeemed? Without Adam’s fall into a life of constant sin terminated by death, what purpose is there to Christianity? None…”

“…evolution destroys utterly and finally the very reason Jesus” earthly life was supposedly made necessary. Destroy Adam and Eve and the original sin, and in the rubble you will find the sorry remains of the son of god. Take away the meaning of his death. If Jesus was not the redeemer who died for our sins, and this is what evolution means, then Christianity is nothing!”

[Editor’s note: an example from the Australian Skeptics: “If evolution is fundamentally correct, then there was no Adam; no Adam, no fall; no fall, no atonement; no atonement, no reason for Christ to have died on the cross. If Christ died for no reason then he was not divine and Christianity has no basis in fact. Is there really any need for scientific proof in order to debunk Christianity?”

Thus Ham points out it’s no accident that humanistic enterprise in philosophical as well as scientific arenas aims squarely at this vital foundation to Christian doctrine and the worldview it requires. He points out that popular thinking in the West has become so anti-Christian that evangelism in many cases now seems easier among people groups to whom the biblical record was previously unknown.

Westerners, including many professing Christians, by and large do indeed assume (even if unwittingly) that the Bible’s historical foundation has been scientifically disproven. Ham rightly argues that returning to a defense of that foundation is essential to an adequate defense of biblical Christianity. He further insists that, sadly, such a defense must be armed against attacks both from without and within the Christian community, for in the present economy “Greek” thinking prevails on a nearly universal scale.

Ham navigates a course of sound doctrine in affirming the fact that it is God Himself who opens one’s heart to trust Him, balancing it with the Christian’s duty to actively and reasonably defend the faith before those who would make inquiry or challenge. Questions about the Bible and Cain’s wife, carbon dating, dinosaurs, the ark, human “races’, etc., are legitimate, reasonable and logical’and are quite capably answered only in the context of a literal Genesis record. Many a Christian’otherwise adept in the Gospel, yet ill-equipped to respond to these intellectual inquiries’may be prone to dismiss them as insignificant, thus publicly portraying God’s Word as apparently incapable of a defense against such honest and reasonable questions regarding its very contents(!).

[I can attest from personal experience to the consequences of just such a double-minded Christian walk. My great confidence and delight in the reliability of God’s Word in speaking to matters of salvation, the conduct of one’s life, etc., was once offset by a wish to avoid facing any topics forcing the issue of the plain meaning and implications of Genesis. My life’even as a Christian’eventually became a mire of bitterness, hypocrisy, and acquiescence to sin, before God mercifully impressed upon me the folly of letting human opinion’of any kind’supercede His Word. Second only to the blessed liberation of salvation itself was the liberating realization that as His child I had no other reasonable option but to embrace, love, and defend His Word (including Genesis) in its straightforward meaning.]

In Creation Evangelism [Now titled Why Won’t They Listen?] Ham introduces what he calls the “seven Cs approach” to teaching (and remembering) certain essential, historical events in human history, beginning in the Genesis record and collectively defining the fundamental elements of the Gospel. The key words employed are creation, corruption, catastrophe, confusion, Christ, and consummation, and Ham stresses the historical validity of these elements, as well as the necessity of thoroughly training Christians to both understand and adequately defend the Bible’s treatment of them and the evidence that supports their historicity.

Beginning with the “Seven Cs” Ham advocates a comprehensive program for helping Christians understand how seamlessly the truth of Scripture (and Genesis particular) relates to the real world, and how this understanding contributes to a vital foundation in one’s approach to thinking about nearly every facet of human experience. Such teaching is vital in helping Christians appreciate the universal applicability of Scripture’particularly in the face of popular human “knowledge” raised up against the knowledge of God. Ham mentions a forthcoming curriculum for this purpose, the likes of which I suspect will richly reward those who undertake to impliment it in humility and love.

Creation Evangelism for the New Millennium [Now titled Why Won’t They Listen?] answers a basic need in the Christian community. It may contain little that is news to the seasoned biblical creationist, but it presents a uniquely concise and straightforward case for those who heretofore have relegated the historicity of Genesis to a class of “secondary” doctrine, and it does so with appropriate gentleness. In the right hands, this book is likely to serve as a valuable tool’a catalyst for restoring a comprehensive, historical/theological basis of sound doctrine for effectively living and proclaiming the Gospel of Jesus Christ.