Most astronomy textbooks teach that our universe was formed in a big bang billions of years ago, and that stars, galaxies and planets came into existence over vast ages.

They teach that the universe and all things within it were not supernaturally created, but rather are the undirected result of the laws of nature acting over the ages.

Such beliefs are the result of naturalistic thinking, a fallacious philosophy that has ensnared the minds of many people in our culture today. God is excluded at all cost. It’s a shame that the universe, which was designed to give God glory (Psalm 19:1), is being misrepresented (due to secular/naturalistic thinking) to exclude God. The enemy has in a sense stolen the field of astronomy. And friend, it’s time to take it back! 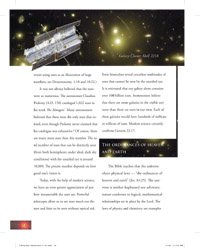 Sample page from Taking Back Astronomy

In this new book we learn how the incredible size and beauty of the universe demonstrate God’s glory. We explore passages of Scripture that touch on the topic of astronomy and find that the Bible has always been correct—whether the passages deal with the spherical earth, the number of stars or the expansion of the universe. We see how the laws of physics are consistent with biblical creation, but do not make sense in a naturalistic philosophy.

Readers will learn why the moon is slowly spiraling away from the earth, and how this demonstrates that the earth cannot be billions of years old. They will see how the magnetic fields of the planets are consistent with an age of thousands of years—not billions.

The book discusses often-asked questions such as, "What should be the Christian perspective on extra-terrestrial life?" and "How did the light from distant galaxies get to Earth in thousands of years?"

Taking Back Astronomy is written in an easy-to-read format for the lay-person (plus, there are several "in-depth" sections containing more detailed information for people with a stronger science background).

Taking Back Astronomy will help Christians to engage the evolutionary mindset of our culture and will challenge skeptics to think biblically about the universe.