Mark down today as a watershed moment in the history of freedom to live as Christians in America. Today in a 5-4 decision the Supreme Court upheld the suit by Christian-owned Hobby Lobby and Conestoga Wood to secure their First Amendment right to follow their consciences by not providing abortion-causing drugs to their employees.

Do You Forfeit Religious Freedom When You Open a Business?

Are religious freedom and free enterprise incompatible? Do Christians who start their own corporations forfeit their rights to practice their faith? The Obama administration and its Department of Justice held that Christians could not keep their religious freedom if they chose to start such a business.1 The Department of Health and Human Services claimed that for-profit businesses could not sue for relief from its offensive demands because “the regulations apply only to the companies, but [the Court’s decision held] that would leave merchants with a difficult choice: give up the right to seek judicial protection of their religious liberty or forgo the benefits of operating as corporations.”2

“Congress shall make no law respecting an establishment of religion, or prohibiting the free exercise thereof.” Those are the first words of the first amendment to the United States Constitution. That is the freedom that has hung in the balance ever since “Obamacare’s” Health and Human Services (HHS) Mandate (of the Patient Protection and Affordable Care Act) went into effect. Companies are not people, but do the people who found them and manage them give up their right to the free exercise of their religion? 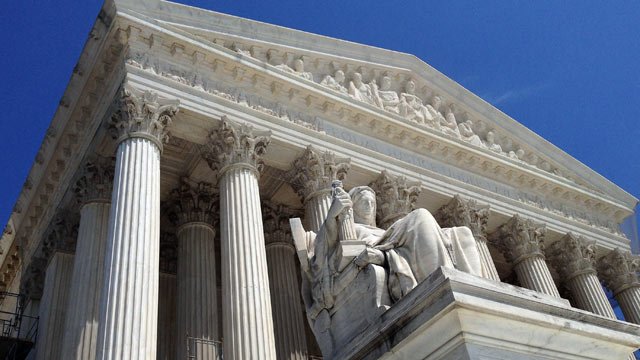 This statue outside the United States Supreme Court is called Contemplation of Justice. Ever since the Obama administration mandated that businesses (except religious ones, like churches) make abortifacient medications available to their employees, countless Christian business owners in the United States have contemplated their fate. Must they pay ruinous fines in the millions of dollars in order to avoid financing the intentional destruction of tiny human lives? Do people forfeit their religious freedom when they start a business corporation? The Obama administration said “yes.” Today the Supreme Court, having contemplated the matter since hearing arguments in 2013, ruled in favor of religious freedom. Image courtesy of Chip Somodevilla/Getty Images through http://abcnews.go.com/Politics/OTUS/presidential-election-change-supreme-court/story?id=17644255.

Obamacare’s HHS Mandate requires businesses to provide medical insurance coverage for drugs that cause early pregnancy loss as a “contraceptive” benefit. But such “morning-after pills” and “week-after pills” destroy the lives of unborn human beings. They can prevent the implantation of an embryo or destroy an embryo soon after implantation. The four abortifacient medications mandated by the HHS are marketed as contraceptives, but they are intended for use after fertilization has taken place in order to prevent or disrupt attachment in the uterus. (Note this is not the same thing as ordinary oral contraceptives, which are designed to prevent fertilization from occurring in the first place. You can read more about the difference at “Semantics Matter: What Does the Pill Do?”) Only “religious employers, such as churches” were exempt from the provisions of the HHS Mandate. Being required to provide this abortion-promoting “service” to their employees violates the Christian principles of many American business owners, hospitals, educational institutions, and religious organizations.

Pay a Fine to Practice My Faith? In America?

You see, religious freedom is about a lot more than which church you go to or whether you go to one at all. A Christian who truly follows our Lord Jesus Christ in gratitude for the salvation He bought for us on the Cross will seek to do so 24/7 in every area of life. Therefore the Christian families who own Hobby Lobby retail stores and Conestoga Wood—like countless others Christians who honor God’s command to not murder the unborn—had a big problem when Obamacare mandated they provide abortifacient drugs to their employees. Requiring people to pay for abortifacient medications is morally the same as requiring them to pay for conventional abortions.

Having to pay a fine in order to practice your religion is a clear violation of the constitutional right of Americans and the natural rights that should be protected for all people in freedom-loving countries.

The Green family, owners of Hobby Lobby, said, “We can’t in good conscience pay for those things because they could cause an abortion at the very early stages of a pregnancy.” At great cost—facing fines for noncompliance coming to over a million dollars a day—these two family-owned companies, represented by the Becket Fund for Religious Liberty and the Alliance Defense Fund, filed suits to protect their rights to religious freedom as guaranteed to all citizens under the United States Constitution. Violation of the right to religious freedom doesn’t just mean being burned at the stake. Having to pay a fine in order to practice your religion is a clear violation of the Constitutional right of Americans and the natural rights that should be protected for all people in freedom-loving countries. In fact, it was primarily such fines that prompted America’s Founding Father and author of the Bill of Rights James Madison to finally see that such Constitutional rights of Americans—already protected under the Constitutions—needed additional protection from abuse.

The road has been long, but the U.S. Supreme Court, which heard the cases as one 2013, issued their split decision today in favor of protecting the religious freedom of Christian business owners under the First Amendment and the federal Religious Freedom Restoration Act (RFRA). “This is a landmark decision for religious freedom. The Supreme Court recognized that Americans do not lose their religious freedom when they run a family business,” explains Becket Fund senior counsel Lori Windham. “This ruling will protect people of all faiths. The Court’s reasoning was clear, and it should have been clear to the government. You can’t argue there are no alternative means when your agency is busy creating alternative means for other people.”

The Religious Freedom Restoration Act (RFRA) of 1993 clarifies the extent of protected religious freedom—which includes individual conscience and not just institutionalized doctrinal positions. It prohibits the government from substantially burdening a person’s exercise of religion even if the burden results from a generally applicable law unless the government demonstrates that burdening the person is of compelling governmental interest and cannot be accomplished by less restrictive means.

The plain terms of RFRA make it perfectly clear that Congress did not discriminate . . . against men and women who wish to run their businesses as for-profit corporations in the manner required by their religious beliefs. . . . Our responsibility is to enforce RFRA as written, and under the standard that RFRA prescribes, the HHS contraceptive mandate is unlawful.

Many Christian universities and other Christian-owned businesses face the same problem with the HHS Mandate.

What about other Christian-owned businesses? Many Christian universities and other Christian-owned businesses face the same problem with the HHS Mandate. Are their rights now protected? What about those Christians who are opposed to all forms of contraception? The HHS Mandate violates their religious freedom as well. Are they protected by the decision? Justice Kennedy wrote, “Among the reasons the United States is so open, so tolerant, and so free is that no person may be restricted or demeaned by government in exercising his or her religion.” As the precedent of this case, reflected in a 95-page decision, is applied in lower courts we shall see how widely or narrowly this decision is interpreted.

Clearly the Court has spoken. Barbara Green, co-founder of Hobby Lobby, said, “The Court’s decision is a victory, not just for our family business, but for all who seek to live out their faith. We are grateful to God and to those who have supported us on this difficult journey.” In her dissenting opinion, Justice Ginsberg complained about how far-reaching this decision is. She wrote, “In a decision of startling breadth, the Court holds that commercial enterprises, including corporations, along with partnerships and sole proprietorships, can opt out of any law (saving only tax laws) they judge incompatible with their sincerely held religious beliefs.”2 We can only hope that the precedent is upheld in future decisions and applied just as widely as Justice Ginsberg fears in the lower courts.

The Court rejected the assertion by Obama’s Department of Justice that business owners’ religious rights were not violated by being forced to pay for the abortion-causing medications since the business owners were not the ones taking the medications. The Court also wrote that the government was free to fund such coverage itself but could not require the business owners to violate their consciences by doing so. (This is the “less restrictive means” of providing the mandated coverage without directly requiring employers to pay.) So how about non-profit organizations? Over 50 cases for non-profit organizations are currently pending in the courts to decide whether those who manage non-profit institutions still have their religious freedom or not.

Windham indicates that these two aspects of the High Court’s decision suggest “The handwriting is on the wall. The Court has strongly signaled that the mandate is in trouble in the non-profit cases too.”

We are certainly heartened that the Supreme Court disagreed with the Obama administration and ruled in favor of religious freedom today. In effect, the Obama administration’s defense of its HHS Mandate has amounted to a declaration that the government can decide which sins are important enough for us to avoid. Should the government be allowed to require Christians to participate in the murder of the unborn? We hope the principles of today’s decision will carry over to protect many categories of concerned citizens. How various lower courts rule in light today’s decision will be important to watch as we hopefully see application of the precedent to many others. We join with the Green family of Hobby Lobby, the Hahn family of Conestoga Wood, and countless other Christians in thanks to God that the U.S. Supreme Court has upheld the rights of Christian business owners today.