Ken Ham of AiG was privileged to be one of the keynote speakers at the fourth national “Multiracial Ministry Conference” in Indianapolis, April 5–7. 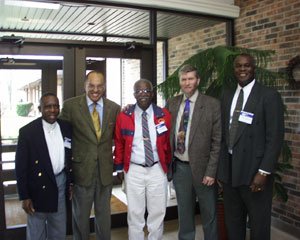 Hundreds of Christian leaders from across America—including prominent black leaders—heard Ken Ham declare that the Bible has the answer to the problem of racism. Quoting from Acts 17:26, for example, he observed that all people are of “one blood.” Therefore, he added, the Bible—and its Genesis account of Adam and Eve—has the answer to the frequently asked question, “Where did all the ‘races’ come from?” (AiG, by the way, normally prefers to use the term “people groups” rather than “races” because of the heavy evolutionary overtones usually associated with the word “race.”) Ham’s keynote and workshop sessions were essentially a summary of his coauthored book, One Blood: The Biblical Answer to Racism.

Calling from the Indianapolis meeting, Ken Ham reported that “AiG is increasingly finding that black churches are interested in, and receptive to, our racial reconciliation message, for which we praise the Lord. Here at Baptist Bible College in Indianapolis [host of this year’s conference, and which has a large black student body], one of the classes will now be using our One Blood book as a textbook.” Another popular AiG book that was gobbled up at the conference was the newly revised Answers Book, which includes major sections on the origin of “races” (and covers other intriguing topics, such as dinosaurs, radiocarbon dating, Cain’s wife, etc.)

Baptist Bible College of Indianapolis is led by President Charles Ware. AiG shares Dr. Ware’s passion not only for educating Bible students and the general public on how to achieve true racial reconciliation, but also for sharing the gospel message through this important topic.

At the Indianapolis conference, a man approached Ken to inform him that his father had just passed away. Yet he was rejoicing in the fact that 12 years ago, his father had heard Ken Ham and Dr. Duane Gish speak in Sacramento, California, and it forever changed his father’s life. He was an ardent evolutionist, and had simply refused to talk to his son about any spiritual matters. But somehow the son got his father to come to the seminar. The father remarked that “Ken Ham and Dr. Duane Gish made a lot of sense.” He then committed his life to the Lord!

Ken Ham has been invited to keynote next year’s conference, which will be held in Seattle, Washington, May 1–4, 2001 (hosted by Antioch Bible Church).