Who Won in Cobb County?

The school board that oversees education in Cobb County, Georgia, USA, took a major test last Thursday, 26 September 2002. Did it pass?

Multiple choice: What should government-run science classes teach about the origin of life?

Is Choice A Correct?

According to the science establishment, this was the correct choice.

On 18 September, the president of the National Academy of Sciences (NAS) sent out a plea, asking science teachers in Georgia to fight the upcoming vote in Cobb County to approve open discussion of disputes about evolution. The letter encouraged teachers to send e-mails to the school board and to write opinion pieces in local and state newspapers. (To help the teachers find information for their e-mails and op-ed pieces, the NAS directed them to its 1998 report Teaching About Evolution and the Nature of Science.) But the letter warned the science teachers not to debate opponents of evolution:

“Given the organizational skills, experience, and political astuteness of those who promote creationism and Intelligent Design, I would suggest that you NOT agree to enter direct debates with the proponents if you have not been involved with such activities before.”1

Is Choice B Correct?

Two days after the NAS sent out its plea, 28 scientists from Georgia—including a chemist who has been nominated five times for a Nobel prize—weighed in. They sent a letter to the school board, pleading for academic freedom to teach the controversy over Darwinian evolution.

On 26 September, the meeting room was packed to overflowing, as the school board listened to 48 adults give one-minute presentations about the pros and cons of the proposed policy. The specific topic of debate was the school board’s proposal that “discussion of disputed views of academic subjects is a necessary element of providing a balanced education, including the study of the origin of the species.” (See Equal time for creation in Cobb County?)

At the end of the discussion, the school board decided to take this view (7-0 vote), siding with numerous parents and leaders in the “intelligent design movement” (led by the Discovery Institute).

The chairman of the school board, Curt Johnston, said that he had carefully weighed the concerns of everyone who contacted him—both inside and outside the state—and as a result the board decided to add a paragraph of clarification, which emphasized “that this policy not be interpreted to restrict the teaching of evolution [or] to promote or require the teaching of creationism.” He also read a six-paragraph statement, without additional comment, asserting that

“Religion has no place in science instruction, but science instruction need not offend those who hold religious beliefs of whatever type. … Although many media reports indicated we wanted to change our policy to promote creationism, this is not the case. In fact, the opposite is true. … Therefore, we have today explicitly added language to the policy itself that … the board is not restricting the teaching of evolution or promoting the teaching of creationism.

“… We are willing to listen; but we are not willing to cater to any particular viewpoint where genuine doubt exists, be it scientific or religious. We expect our science instruction to be broad-based, factual, and respectful of all views.”2

The audience erupted into applause, as supporters of “teaching the controversy” learned that the policy had been approved. The president of the Discovery Institute called the decision “a victory for academic freedom and good science education,” and he knocked those who were “trying to mischaracterize the controversy as a battle over religion”:

“The charge that this is about religion is nothing but a smokescreen to shut down free inquiry. There are growing numbers of scientists who believe that it’s time for students to study evolution like they would any other controversial topic in science—by learning about scientific evidence both for and against the theory. Why should evolution be the only controversial topic immune from critical examination in the classroom?”3

While many parents were beaming, and others were shaking their fist (one parent screamed, “I’ll see you in court!”), some reactions were fuzzy. The pro-evolutionist organization National Center for Science Education (NCSE), headed by avowed atheist Eugenie C. Scott, claimed, “The Board is to be commended on its unanimous decision to not present creationism in science classes in Cobb County.” The NCSE press release asserted that, “contrary to some recent press reports, the policy on Origins of Life adopted by the Cobb County … specifically disallows the teaching of creationism.”4

Anyone actually reading the policy, rather than reading into the policy, can see that the school board made no such blanket ban. However, the waters surrounding this whole issue continue to be muddy. The grey areas abounding as to how to even define science and religion allow the various interest groups to put their own “spin” on this ruling.

Is it the crack in the walls heralding the imminent collapse of humanism’s stranglehold on our society? (See The Intelligent Design Movement) We wish it were so, but that may be prematurely optimistic. Nevertheless, we take some encouragement from it. We trust that Christian teachers will be able to take advantage of it to feel increasingly free to discuss the true nature of science, the role of religious (including atheistic) assumptions in historical science, and the way in which it is absurd to insist that issues such as the Bible are “left out of it”. (There are ways to discuss such things in the context of science without engaging in specific religious teaching—see Ken Ham’s article Creation: “Where’s the Proof?”)

Neither molecules-to-man evolution, nor the whole “millions of years” framework of geological orthodoxy, is “science” in the same sense as the operational science that sends men to the moon or battles cancer.

The study of origins involves historic events that are beyond the realm of experiments and testing in the laboratory. History is not repeatable or observable—obviously no-one was present to observe the first man stand on two legs, and this event will never be repeated. So finding out the truth about historical events requires a different approach from other types of science.

The debate about origins is not about “science versus religion’; it’s about two different ways of interpreting the same set of facts to discover what’s true about the past. These two ways of interpreting facts are both religious, in the sense that they’re both worldviews that we accept a priori and use to sift evidence and determine what’s true about life. (See Q&A: Religion.) Evolution is based on a naturalistic, materialistic worldview that excludes God and rejects His revelation; and “the other view” accepts the possibility of a Designer and Creator.

Christians surrender too much, however, when they reject (or put to one side) the validity of God’s inspired revelation about historical events. A trustworthy eyewitness has far more weight than any smattering of forensic material we might scrape up about past events. Archeologists and geologists are constantly fighting and contradicting each other’s conclusions, depending on the assumptions that they begin with. But if we have a Witness whose integrity is impeccable, then no “evidence” from modern digs will ever controvert His witness.

God was present at the Creation and the Flood. Although we can use logic and experimentation to make reasonable guesses about how the current topography and biodiversity arose from these events, and can seek to flesh out our understanding of the details, we cannot ultimately determine the truth about those past events without the reliable history in His Word. 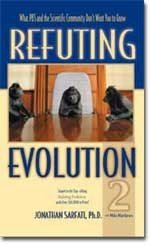 Back in 1999, Dr Jonathan Sarfati of Answers in Genesis wrote a devastating critique of the National Academy of Science’s pro-evolution report Teaching About Evolution and the Nature of Science. In his critique, called Refuting Evolution, Dr Sarfati explained how the “lens” of evolution has blinded evolutionists to the true—and more reasonable—interpretation of the facts, based on God’s revealed Word. The NAS has never been able to answer these arguments, because they have no answers.

Now Dr Sarfati has released a new book (available 21 October, 2002, see cover at right). This book uncovers the false assumptions, empty logic and bad science behind the most recent attacks against creation and arguments for evolution. Is creation “just religion” but evolution a “fact”? Is evolution compatible with Christianity? These questions—and many, many more questions from today’s “education debate”—are explained fully, and fully answered, in this indispensable new book.