‘Facts’ by themselves are essentially meaningless—they all need to be interpreted within a particular philosophical framework.

Have you ever watched the comedy movie The Gods Must Be Crazy? Someone drops a coke bottle from a plane into a group of native people in Africa who have never seen such a bottle. The whole movie centres around a particular interpretation of what they thought the coke bottle really was. The movie title refers to their belief that “the gods” had sent it. However, it caused so many squabbles about who should use it that they decided that it was an evil thing that must be returned to the gods by dropping it over “the edge of the world.”

The bushmen had a totally different way of looking at this bottle from that of the people who dropped it. Why did they get it so wrong? The following exercise will help us understand what was happening. 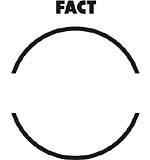 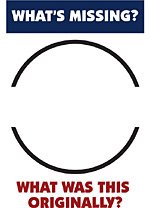 Let me help you by offering you some options. See if one of these is one of the possibilities you thought of. 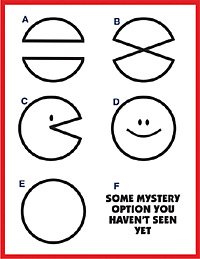 Most people say it was a circle originally, and thus choose option E. However, the correct answer is that nothing is missing, because I drew the “fact” (first illustration pictured above) just as you see it!

This simple exercise teaches us a very important lesson about evidence and interpretation. The point is that “facts” by themselves are essentially meaningless—they all need to be interpreted within a particular philosophical framework. 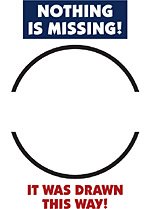 What those listening to me should have done was to question my question! In other words, instead of accepting this presupposition without question, they should have asked how I knew something was missing—thus questioning my question! In doing so, a person may then discover that there could be a totally different way of looking at this same “fact.”

The problem is that most people have not been trained to even understand that every “fact” has been interpreted by a presupposition that in essence asks a question—let alone whether the right question was asked!

For instance, the public reads almost daily in newspapers and magazines that scientists have dated a particular rock at billions of years old. Most just accept this. However, creation scientists have learned to ask questions as to how this date was obtained: What method was used? What assumptions were accepted to develop this method?

These scientists then question those assumptions (questions) to see whether they are valid or not and determine whether the rock’s age could be interpreted differently. Then the results are published to help people understand that scientists have not proved the rock is billions of years old, and that the evidence can be interpreted in a different way to support a young age.

For example, consider the research from the creationist RATE group concerning the age of zircon crystals in granite. Using one set of assumptions, these crystals could be interpreted to be around 1.5 billion years old, based on the amount of lead produced from the decay of uranium (which also produces helium). However, if one questions these assumptions, one is motivated to test them. Measurements of the rate at which helium is able to “leak out” of these crystals indicate that if they were much older than about 6,000 years, they would have nowhere near the amount of helium still left in them. Hence the originally applied assumption of a constant decay rate is flawed; one must assume, instead, that there has been acceleration of the decay rate in the past. Using this revised assumption, the same uranium-lead data can now be interpreted to also give an age of less than 6,000 years.1

The bushmen in the movie had the wrong presupposition when trying to interpret the coke bottle. Because they asked the wrong question, they came up with the wrong answer and thought it was something that was evil and must be disposed of.

All of this should be a lesson for us to take note of the situation when we read the newspaper—we are reading someone’s interpretation of the facts of world history—there very well could be a different way of looking at the same “facts.” One can see this in practice on US television when comparing a news network that’s currently considered fairly liberal (CNN) with one that is more conservative (FOX)—one can often see the same “facts” interpreted differently!

I had the opportunity to explain all of this to a student at a Christian university who was frustrated with one of her professors who claimed to believe the Bible was the Word of God.

She said: “I wanted to write a paper on Job 40, stating my belief that the creature called ‘behemoth’ mentioned in this passage was a dinosaur living at the time of Job. However, my professor told me that unless I could show clearly documented evidence that dinosaur and human fossils were found together in the same rock layers—and he said no one has ever found this—then, I could not write on dinosaurs and humans living together. He said that scientists had proved dinosaurs lived millions of years before man. What can I say to my professor?”

My response was to suggest this student confront her professor with two issues:

The famous Wollemi pine from Australia—yet another living example of something previously known from fossils only, and dated by evolutionists as existing millions of years ago. Creationists understand that the reason no evolutionary change is evident in the many living fossils, like this one discovered, is that there has been no evolution.

And it’s not just the coelacanth—there are numerous (in fact hundreds) of examples of plants and animals living today that are represented in the fossil record as being supposedly millions of years old, and yet they are not found fossilized in the same layer as human fossils. Consider the Wollemi pine tree found in 1994 in the Blue Mountains in Australia—it was thought to have become extinct with the dinosaurs, but was then found living alongside people in this present world!7 Another example is the tadpole shrimp, said to have lived from 250 to 65 million years ago, yet identical shrimps have been found living today.8

The reason so many Christian professors (and Christian leaders in general) have rejected the literal creation position is that they have blindly accepted the interpretation of evidence from the secular world, based on man’s fallible presuppositions about history. So they have tried to reinterpret the Bible accordingly.

If only they would start with the presupposition that God’s Word is true. They would find that they could then correctly interpret the evidence of the present, and also show overwhelmingly that observational science over and over again confirms such interpretations. For example, fossil red blood cells and traces of hemoglobin have been found in T. rex bones, although they should have long decomposed if they were millions of years old.9 Yet the reaction of the evolutionary researchers was a perfect illustration of how evolutionary bias can result in trying to explain away hard facts to fit the preconceived framework of millions of years:

It was exactly like looking at a slice of modern bone. But, of course, I couldn’t believe it. I said to the lab technician: “The bones, after all, are 65 million years old. How could blood cells survive that long?”10

Whenever you hear a news report that scientists have found another “missing link” or discovered a fossil “millions of years old’—try to think about the right questions that need to be asked to question the questions these scientists asked to get their interpretations!

And don’t forget, as Christians, we need to always build our thinking on the Word of the One who has the answers to all of the questions that could ever be asked—the infinite Creator God. He has revealed the true history of the universe in His Word to enable us to develop the right way of thinking about the present and thus determine the correct interpretations of the evidence of the present. We should follow Proverbs 1:7 and 9:10 that teach that fear of the Lord is the beginning of true wisdom and knowledge.