No intelligence to create life?

For more than 50 years we have been told by scientists that they have been on the verge of creating life in a laboratory.

For more than 50 years we have been told by scientists that they have been on the verge of creating life in a laboratory. Remember the famous Miller-Urey experiments of 1953, accounts of which have appeared in our school biology texts ever since? Some people today believe (wrongly) that Miller-Urey conclusively showed that life could be created in a lab.1 This week the latest claim (reports the Associated Press) is that, in various places around the world, “scientists are trying to create life from scratch, and they're getting closer.”2

Some people today believe (wrongly) that Miller-Urey conclusively showed that life could be created in a lab.

What is the operative word in that quote? Scientists create. In other words, intelligent scientists working in multi-million-dollar facilities are trying to create life. Now, if it requires intelligence to accomplish this, it begs the question: who would have been the cook making the first primordial soup billions of years ago in evolution’s supposed history?

In addition, these scientists are using chemicals from DNA to help create their protocells. They are not starting from scratch at all! In reality, the formation of these chemicals requires an extremely complex process, which they are avoiding by starting with the end products.

Furthermore, there is even a greater insurmountable barrier: the scientific law of abiogenesis, which states that life cannot arise spontaneously from non-life. Creative manipulation by intelligent scientists does not override this basic law of science in nature.

There are yet other stumbling blocks to producing such artificial life. For example, how will this “new” life-form reproduce itself (we note that the Creator made living things with the ability to multiply; Genesis 1:28)? How will the DNA chemicals come together in a meaningful way to supply the information needed to allow the cell to function? And how will the cell be able to acquire food and make energy? 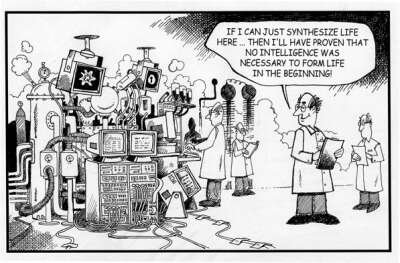 An incredible intelligence was needed to create something as incredibly complicated as the DNA molecule and its genetic code system, and then also to create the ability for organisms to reproduce and turn food into useful energy. All of the elements have to be there—all together at the same time—for a living thing to come alive. It can’t be accomplished in a stepwise process, for it will bog down and die, and there will be no advance. But it was all there—and fully functioning in the organisms designed by the Creator during the creation week of Genesis.

Evolutionist Jack Szostak of Harvard Medical School admitted in the AP article that “we aren’t smart enough to design things.” But before you think he might be warm to Genesis creation, he then incongruously added: “We just let evolution do the hard work [of design] and then we figure out what happened,” In other words, the chance process of evolution is smarter than we are.

Ultimately, experiments such as the ones being conducted today show that a Master Designer created life—that it did not come about by the mindless process of evolution which scientists are trying to replicate. But these researchers are using their minds and their own creativity to do so—and all to prove that life came around by chance?

Now, such engineering might be useful in the medical arena in fighting diseases for example (but there might be pitfalls to such engineering3). But don't be fooled into thinking that no intelligence and no pre-existing chemicals and genetic information are involved in these latest experiments. Frankly, these scientists could save millions of dollars if only they would consult the Bible, starting with Genesis, to find the real answer about life’s origins—and purpose.

[Editor’s note: Dr. Georgia Purdom will be writing a more in-depth article on the subject of synthetic life in the near future.]