Popular views on evolution include the concept that life originally arose from non-living chemicals through the interaction of matter and energy.

In their research into the possible chemical environs and reactions necessary for such an event, many early evolutionary researchers (pre 1930) assumed that the earth’s atmosphere had never been radically different than the present, i.e. contained free oxygen (O2), nitrogen (N2) and minor carbon dioxide (CO2).

However, it was soon realized that chemical research using this assumption was doomed to failure, since the organic molecules needed for the biological processes, e.g. sugars and amino acids etc. are unstable in the presence of compounds such as O2, H2O, CO2. In fact, under such conditions, “biological” molecules would be destroyed as fast as they could be produced. It would be impossible to produce such molecules in the presence of an oxidizing atmosphere.

Most theorists rationalized that the only way to avoid this problem was to propose that the earth’s first atmospheric conditions were dramatically different from those that exist today. The only feasible alternative atmosphere envisaged to provide a “protective” environment for organic reactions, was a reducing atmosphere—one which had little or no free oxidizing compounds present.

Most such atmospheres postulated to date have consisted of compounds such as: methane, carbon monoxide, hydrogen, ammonia, nitrogen, and water. The following table compares this atmosphere with the composition of the present oxidizing atmosphere.

None of the elements are present solely in their most reduced state. However, such an atmosphere would have far lower oxidizing potential than our present atmosphere. Miller’s1 work reported in 1953, received much enthusiasm in the press. On the basis of his assumption as to the nature of the primitive atmosphere, Miller was able to generate significant amounts of amino acids in the apparatus illustrated. 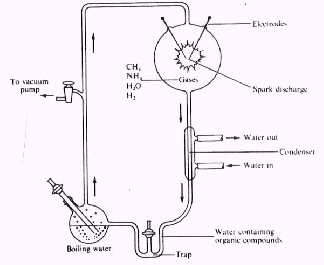 The outcome of his experimental work is very interesting and has formed the framework of some extensive theories and is also very readily accepted as fundamental information in texts on the origin of life. In a sense his work represents a milestone to evolutionary theorists. Our interest is to be centered on his assumptions rather than the outcomes.

Attempts to arrive at an acceptable evolutionary hypothesis concerning the primitive earth can be placed into two basic categories. The first category would be represented by Urey and subsequent similar concepts. The second, by the conceptual scheme of Abelson.

The Urey approach2, 3 is primarily based on cosmological theories concerning the abundance of elements throughout the universe and in particular the solar system. Urey’s work is very dependent upon his concept that the present observable atmosphere on Jupiter represents what the original earth must have been like.

Urey in collaboration with Miller,4 attempted to quantify his views about early atmosphere composition. They painstakingly calculated:

Adding into their calculations the present known rate at which the hydrogen in the earth’s atmosphere (from whatever source) escapes into space they concluded that to produce present known quantities of O2 from H2O and to let the double volume of H2 escape until it reached its present value of 1 x 10-6 atm, would have taken many thousands of trillions of years. This age for earth’s atmosphere was felt to be unrealistically high. They therefore proposed that since the earth was assumed to be younger than many thousands of billions of years, the H2 concentration must have originally been higher than at present and the value of 1.5 x 10-3 ATM, was suggested. Then, using equilibrium constants for the reaction of H2O and CO2 and the pp H2 of 1.5 x 10-3 ATM, values were then obtained for the products CH4 and CO, etc.

It should be evident, however, that the final values used and results obtained represent no more than a “self-fulfilling” set of cyclic assumptions.

The second type of approach typified by Abelson5 is to propose a model into which the available geochemical evidence is utilized.

Abelson’s views are moderately popular among geologists since he is himself a geochemist. His major bone of contention with the Urey type reducing atmosphere models is his claims that there is no geochemical evidence that would even suggest the earth’s atmosphere ever contained large quantities of methane or ammonia.

Abelson claims that a methane atmosphere would have left some trace of its existence in the oldest rocks of the geologic record such as an unusually large proportion of carbon and hydrophobic organic molecules. No such deposits are known. In fact, most of the carbon is present in oxidized form, such as carbonates (limestones) in sedimentary rocks. Since limestones do not form in the presence of a reducing atmosphere, their presence in what are regarded as some of the “oldest deposits” creates great difficulties for a belief in an early reducing atmosphere.

Most organic carbon in sedimentary rocks appears to be the product of plant decomposition and therefore has had a photosynthetic origin.

The key factor of Abelson’s hypothesis is that he regards the earth’s earliest atmosphere as being the product of gas released from volcanoes as the earth cooled. Studies of volcanic I gases have shown that H2O and CO2 are the major volatiles. However, a significant amount of H2 is usually found in volcanic gas and this raises the reducing potential of the mixture.

Abelson assumed that HCN was a major precursor to biologically significant compounds and noted that since it could be formed by reacting CO, H2, and N2, a reasonable scheme could involve the prior reduction of CO2 to CO by H2. A problem arises here, however, in that HCN will not form in the presence of H2O. To remove this problem, Abelson proposed a very cold atmosphere to trap out the bulk of the water. His reaction scheme, however, has failed to propose convincing sources for:

He has, however, successfully shown the weakness of the hypothesis of Miller and Urey and demonstrated that not all evolutionary theorists regard a total reducing atmosphere as essential.

Significant argument has also been raised against a methane ammonia atmosphere. Ferris and Nicodem6 have demonstrated that NH3 is destroyed by UV light readily, even in the presence of water vapor. “Hydrogen was the only gas which markedly decreases the decomposition of NH3 . . . . If there were no high pressure (~ 50 torr) of H2 in the primitive atmosphere, any NH3 present would have been photolysed to N2 in 106 years. For NH3 to have had a significant role in chemical evolution, life must have evolved during that geologically short period. Otherwise, one must conclude that NH3 had no role in chemical evolution.”

Abelson feels strongly that 30,000 years would have been sufficient time to effect the decomposition even if all the present atmospheric N2 were initially present in the form of NH3.

It may be suggested that NH3 could have been continuously generated to maintain the partial pressure of NH3 at a significant level. It should be pointed out, however, that the activation energy for the reaction-
N2+3H 2 = 2NH3
is about 230 kj/mole in the absence of a catalyst. Modern technology requires special catalysts and high pressures to make this reaction proceed at a significant rate. No realistic mechanisms have been provided for prebiological synthesis.

There is also much positive evidence that atmospheric oxygen has always been an important component of the earth’s atmosphere.

There is also much positive evidence that atmospheric oxygen has always been an important component of the earth’s atmosphere. It has left its trademark in the “red beds,” i.e. either massive bodies or minor inclusions of hematite (Fe2O3), in what are regarded as the earliest of sediments. Berkner and Marshall explained away their occurrence in terms of local oxidizing conditions and also supposed these beds would be absent in really old strata. Davidson7 has pointed out that such oxidized beds have been found with uniformitarian “ages” in excess of 1.5 billion arbitrary geologic years, (A.G. Yr ) citing as example the Roraima formation 1.7 billion (A.G. Yr ). Other examples include the Lorraine formation of Ontario at 2 billion (A.G. Yr),8 the Muruwa formation of Guyana at around 2.5 billion (A.G.Yr),9 and the Fig Tree series of Swaziland at 3.4 billion (A.G. Yr).

According to Berkner and Marshall,10 the amount of oxygen generated by photolytic dissociation, of H2O would have been self-limiting since O2 absorbs UV radiation to effectively shield water vapor. However, Brinkman11 claimed the assumption and calculations of Berkner and Marshall to be in error, and making the necessary corrections, reworked their calculations and established a minimum oxygen concentration in excess of 20% of the present partial pressure. Considering the geologic evidence for oxidized sediments, he was not convinced that surface oxides were responsible for absorbing the amount of liberated oxygen. Thus there is a “uniformitarian geologic” case for an oxidizing atmosphere preceding the photosynthetic organisms, which would in fact militate against any view of evolution at all.

Davidson’s observations and Brinkman’s calculations concerning oxygen content of the early atmosphere imply that the reducing atmosphere is no more than a concept. The evolutionary theorist is left with the invitation of Miller and Orgel12 to construct his own scenario for the nonoccurrence of free oxygen on the early earth and from thence the origin of life itself.

The reason for the widespread adherence to the belief in a primitive reducing atmosphere, in spite of much evidence to the contrary, is the same reason for which it was postulated. If you are to believe many of the theories of chemical evolution at all, you simply have to believe the earth’s atmosphere was once radically different from its composition today, and then look for evidence and experiments to support your belief.