The beaks of the Galapagos finches, made famous by Darwin, have changed over time. Some secular textbooks trumpet this as one of the best evidences for evolution. In the graph we see change over time, but notice where the line starts and ends. The net change in the graph is virtually zero, so the change cannot be used to support the idea that finches evolved from dinosaurs, which would require massive amounts of change. The graph does support changes in an already-existing trait. The fact that the beak size changes over time, however, does not explain the origin of wings, feathers, or the beak. It is simply speciation (change within a kind). Change, by itself, is not evolution. Look carefully for the “small change” in the theory of evolution. 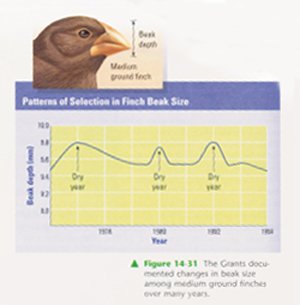 Often cited as evidence for evolution, the finches of the Galapagos Islands actually demonstrate variation within a kind and the limits of change. Note that the graph shows no net change in beak size of the finch—it leaves off right where it started. This is certainly evidence that populations can change but not that they can change into new kinds. Chart from Prentice Hall Biology, page 316.