A Leader for Biblical Equality

Many people believe the abolition of slavery began in the United States during the American Civil War of the 1860s. In fact, the abolitionist movement began decades earlier in the British Empire under the unrelenting leadership of one man, William Wilberforce. 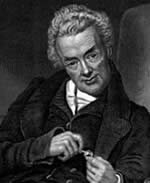 William Wilberforce was born in 1759 in the English city of Kingston-upon-Hull. He was educated at St. John’s College, Cambridge, and was elected as Hull’s Member of Parliament in 1780.

Wilberforce became a Christian in 1784. His salvation drove him to consider deeply his position in politics, even to the point that he considered leaving politics to become a minister. He eventually concluded that God had called him to public office to further causes that were in line with biblical truth. The most famous of these causes was his commitment to abolish slavery. Wilberforce’s salvation, therefore, had a profound influence on the history and way of life in the United Kingdom, the British Empire, and indirectly even the United States and its territories. 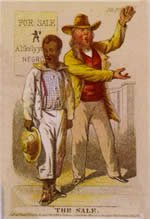 This card by H.L. Stephens (1842–1882), an American illustrator of political satire, was part of a series of collecting cards depicting the plight of the slave.

The Society for the Abolition of the Slave Trade was founded in May 1787. Support for the movement was nationwide but was particularly strong in Northern England.

In 1788 one hundred petitions attacking the slave trade went before the House of Commons, and in 1792 that political body voted in favor of the principle of abolition, 230 votes to 85. However, upon seeing the extreme radicalism of the French Revolution, the Commons reversed the 1792 vote in 1793 hoping to avoid such a revolution in the British Empire.

Wilberforce and the other abolitionists were driven by their belief in the inerrancy of Scripture, acknowledging that God had made all nations of one blood (Acts 17:26) and that all men were created in the image of their Creator God (Genesis 1:26). John Wesley described slavery as “execrable villainy,” and said, “Unless God has raised you up for this very thing [abolition], you will be worn out by the opposition of men and devils. But if God be for you who can stand against you?”1

Wilberforce’s opponents included Lord Nelson, who later became the hero of the Battle of Trafalgar. Nelson wrote about the “damnable doctrine of Wilberforce and his hypocritical allies.”2 Wilberforce was known to be an abolitionist, but his strategy was first to end the slave trade. The Abolition of the Slave Trade Bill, which made the buying and selling of humans illegal throughout the British Empire and its colonies, became law on March 25, 1807. 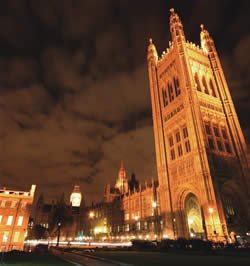 Britain’s Parliament is where William Wilberforce struggled for man’s equality before God, and where he fought to abolish the slave trade in the British Empire.

Even with this success, Wilberforce was unfinished. He sought to see slavery completely abolished, believing that all people are descended from Adam and that none were less than human. At congresses in 1814 and 1815, held in Paris and Vienna respectively, Wilberforce tried, unsuccessfully, to persuade other European powers to follow the abolitionist route.

Shortly before his death, Wilberforce learned that the Reform Act of 1833 had passed. Within four years that Act would outlaw all forms of slavery in the UK and the West Indies.

If slavery had not been abolished in the early nineteenth century under the influence of such Christians who understood the Bible’s teaching on origins, what chance would there have been subsequently, as evolutionary thought took over in the mid-nineteenth century? Indeed, slavery has been retrospectively justified on the basis of the supposed lower order in the evolutionary process of certain “races.” We can thank God for men like Wilberforce and the eighteenth-century Evangelical Awakening that brought so many souls to faith in Christ. Christians today should learn from Wilberforce’s dedication to God’s Word that the truths of God’s Word, from the very first verse, should govern our standards. Wilberforce was guided by the truth that all men are descended from Adam, created in the image of God, and this truth continues to transform societies around the world.