We are pleased to post a commentary by Ted Schulz, professional golfer (past winner of the LA Open in California) and avid AiG supporter.

We are pleased to post a commentary by Ted Schulz (right), professional golfer (past winner of the LA Open in California) and avid AiG supporter.

Each year, Ted hosts the “Missing Links” golf tournament in Louisville, Kentucky USA to benefit AiG and its future Creation Museum in Northern Kentucky.) Ted has a passion for “creation evangelism,” and helps out AiG in so many ways (he sees this type of ministry as a kind of new “hole-in-one” in his life!). His account below demonstrates that anyone–even if they don’t have high scientific and theological qualifications–can have an impact in their spheres of influence when they use AiG“s faith-building resources.

We have a very large church (approx. 15,000 members) in Louisville–Southeast Christian Church. Like any church, we have a variety of Christians who are at different places in their walk with Jesus Christ; we have many new converts who are “baby Christians” and really need the foundational knowledge of the gospel that AiG teaches in Genesis.

Last Spring I started a Creation/Genesis class at church, and we had a very good response — over 100 people signed up! I taught the class for seven weeks using all the AiG materials. The purpose of the class was to help our church to evangelize the lost and edify the saved using “creation evangelism.” Most of those who attended were unfamiliar with creation evangelism and why it’s important.

I talked to them about how the world attacks Christianity at its foundation–in Genesis–and how we need to be prepared to defend our faith and answer the questions and objections people have.

The first week we talked about understanding the Bible as a history book that connects to reality; I gave them an “indoctrination test” to see if they think Biblically and how much they have been influenced by evolution without even knowing it. The questions included: Cain’s wife, age of the Earth, and why is there death in the world? We also talked about the importance of starting all of our thinking with the Bible instead of bringing secular ideas to the Bible. I hit hard on the fact that we as Christians cannot Christianize a secular worldview.

The next week I showed the connection between the moral collapse in society and the teaching of evolution. We also talked about how evolution is not science but religion, and how all of our Biblical doctrines have their origins in Genesis, and that the meaning of anything is tied to its origin. I hit hard on the fact that our Christian faith is not founded in myth or allegory–it is founded in history. Jesus taught it as history, so did the New Testament writers. 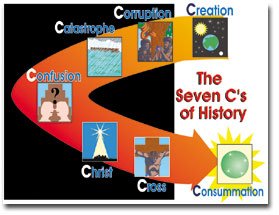 Then we studied the Biblical worldview by using AiG“s “7 C’s” framework for understanding everything I would teach them in class. I explained to them the days of creation (the first C) and why they must be ordinary days. I hit hard on the fact that we cannot allow death before sin (the second C, “Corruption”) or it destroys the message of the Cross.

We discussed why the Big Bang is not Biblical or a good idea for Christians to be promoting. We talked about the flood (the third C, “Catastrophe’)as a judgment, and why it had to be a global flood. We then discussed the origin of the races and the Tower of Babel (the fourth C, “Confusion’), and how Jesus Christ (the fifth C) is the answer for our sin.

We also answered the question of why there is death and suffering in the world, and how Christ’s own death and Resurrection brings new life to those who believe and trust in Him (the sixth C, the “Cross”). All throughout the class I kept emphasizing that the Bible teaches that death is a result of sin and that this is critical to understanding the world.

We examined the evolutionary frauds and hoaxes down through the years such as Haeckel, and how it is still going on today with the Archaeoraptor fraud. We also discussed homology, biology, DNA, natural selection, adaptation, and speciation, and how all these things fit with creation not evolution. They needed to know that the issue was not about the facts but the interpretation of the facts (which were dependent on our presuppositions to start with).

The 5th week, we focused on geology and the Flood, and how the evidence is overwhelming in favor of what the Bible says. We hit hard on the fact that the flood was a judgment and that most of our fossil record is a memorial to us: that God once judged the world with a flood. We talked about how a fossil requires catastrophism not long slow processes. I gave numerous examples from Creation magazine of fossils that couldn’t have taken millions of years to form. I showed them the evidence from Mount St Helens and how this supports the Flood account. We concluded that evolution was impossible–it’s not science, and requires blind faith belief.

The 6th week we turned to dinosaurs. I showed how we can explain the Gospel using dinosaurs and how the world uses them to promote evolution. We discussed the problems and assumptions with the dating methods, and I gave numerous examples of errant dates. I demonstrated how science has not proven the Earth to be billions of years old. I also gave many scientific evidence of a young Earth.

The last week we discussed “creation evangelism.” I showed 25 minutes of Ken Ham’s video tape explaining the importance of this evangelistic approach today because society is like the ancient Greeks and is void of any foundational knowledge of Christianity.

We also talked about the importance of the future US Creation Museum (only 90 miles from Louisville) and how we need to bathe it in prayer.

The class was received very well. One woman told me that she believed in evolution going in, but no longer. Here are a few of the comments I received concerning the class.

“Ted–I am learning new things in your class. I’m also realizing the media/entertainment has influenced me much more than I’ve ever guessed.”

“What freedom there has been in accepting the Word of God as the absolute truth. It has freed me from ever having to theorize or speculate again about God’s intentions.”

“The many references including the books, newspaper articles, cassettes, video tapes and Internet information gave us a wealth of convincing material to show us God meant what He said and did what He did!”

“I was a theistic evolutionist before your class but not anymore. Thanks!”