Evidence of early stone artifacts in Central Asia has once again upset the human evolution cart.1 Past findings in the country of Georgia had already placed these human occupants in the region 1.7 million years ago (according to secular dating assumptions). But new finds push back their presence in Asia to 1.85 million years ago (again, according to secular dating methods). 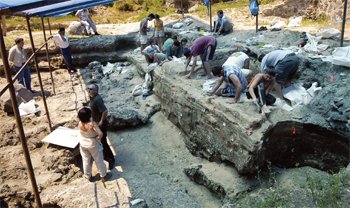 Such a time frame would mean Homo erectus was in Asia before he was in Africa. That doesn’t make sense if he originated in Africa, but it makes plenty of sense if all humans spread from the same original site in Asia (Babel).

The so-called “Out of Africa” model of human origins assumes that Homo erectus evolved in Africa and colonized the world before being “replaced” by modern Homo sapiens—also from Africa.

That version contradicts the Bible’s eyewitness account, which assures us that all humans—including the fully human people called Homo erectus—settled in the plains of Shinar (modern-day Iraq) soon after the Ark landed. But when God judged them for their rebellion at Babel, they spread to the rest of the world.