When we think of Neanderthal, many of us still envision a hairy, backward subhuman hunched over a recent kill. This faulty assumption about the intelligence of Neanderthals received further challenge from a U.S.–British research team that closely examined some of their stone tools. 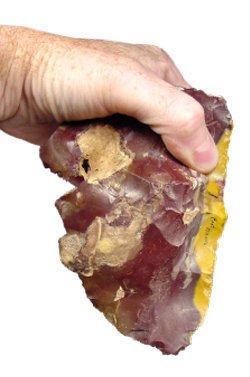 This Neanderthal handaxe has an ingenious design—finger pockets on both sides and a round end to distribute impact across the entire palm. Photo courtesy of WorldMuseumOfMan.org

Creationists recognize that Neanderthals were intelligent humans, descended from Adam and made in God’s image. Since the early twentieth century, Neanderthals have enjoyed improvement in their reputation among secular scientists, as more is learned.

Compared to other people groups, Neanderthals have noticeable skeletal differences, but it is not evidence that they had a different ancestor. Creationists contend that, after the Tower of Babel, some groups of people, including the group now known as Neanderthals, migrated into Europe.

Using the Bible and good science, we can confidently say that the humans known as Neanderthals were intelligent and capable, just as any other people group, despite their relatively insignificant outward differences.