Lucy and Her “Child” Look Like Extinct Apes After All

The field of human origins is a very fast-paced area. Indeed, almost every new hominid fossil that is found causes a reshuffling of the human evolutionary tree.

Typically, a new fossil is discovered and receives a good deal of media attention as a new candidate for the “missing link.” The “human-like” characteristics are hailed as the specimen takes its place as an ancestor of man. Then, one of two things happens. Either (1) other researchers examine the specimen and report that it may not be quite so human like, or (2) a new, more complete specimen is found which provides more information and the human-like traits are downplayed.

An example of the first case is the Toumai skull (Sahelanthropus tchadensis). When initially reported, the fossil was touted as “the oldest human ancestor” and “the most significant find in living memory.” However, a few days later, alternate interpretations of the fossil came to light with the suggestion that it may have been a female gorilla.1,2 Some of the characteristics that suggested it was human-like were sexually dimorphic differences between male and female gorillas. (Female apes tend to be more similar to humans.)

An example of the second case is the just-released report about “Lucy’s child,” the fossilized remains of an approximately three-year-old female child that was clearly identified as an australopithecine.3 The alleged 3.3-million-year-old find, nicknamed Selam, has created quite a stir.

The first specimen of australopithecine was found in 1974 by Donald Johanson and given the name “Lucy” (after the Beatles song “Lucy in the Sky with Diamonds”). For many years, Lucy held the distinction of being “our oldest ancestor” as many scientists believed Lucy to be a transitional intermediate ancestor between humans and chimpanzees. 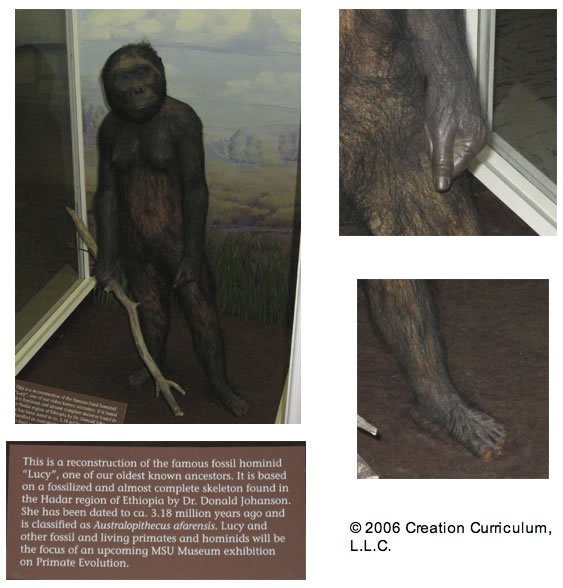 Notice the human-like hands and feet. This is based on the assumption that Lucy walked upright—not on any fossil material.

Although it has remained somewhat controversial whether Lucy and her kind could walk upright, the general consensus agrees with Johanson that they did. (But see Did Lucy Walk Upright? for a different view.) But there is contradictory data. The fingers are long and curved like a chimpanzee and the wrist has a locking mechanism like chimpanzees that walk on their knuckles on all fours. The organ of balance is also very chimp-like in the australopithecines. Conclusions can be difficult to draw because these fossils are fragmentary and broken and must be reassembled.

One of the important pieces of evidence is the Laetoli footprints. These footprints were clearly made by individuals who walked upright as modern humans do. Because of the date assigned to these footprints, most have accepted the conclusion that they were left by australopithecines and therefore these creatures walked on two legs. (Whether or not Lucy walked upright does not prove that man evolved from such a creature since God could have made a primate species that could walk upright.)

This new “Lucy’s child” specimen is quite a remarkable find and will yield significant observations. The skeleton is rather complete and very well preserved. In particular, the hyoid bone was found intact. (This bone is associated with the larynx and plays a role in vocalization.) The hyoid is an extremely rare find. Because of the completeness and preservation of this specimen, it removes much of the guesswork that is often involved when the fossils have to be reconstructed. This makes the interpretation of the specimen more reliable.

According to the news reports,4 most of the characteristics have more similarity to chimpanzees and gorillas than to man including:

Thus, in essentially every way, the evidence shows a stronger affinity to the great apes than to man. While there are still some distinct characteristics of australopithecines that distinguish them from modern apes, they are most likely just an extinct ape type.

There are still portions of this new specimen that need to be analyzed, including the foot. This will be extremely important as it will play a major role in determining whether these creatures could walk upright or not. While some of the bones of the lower body might be consistent with upright walking (femur and knee) they could also be adaptations for significant tree dwelling. If the foot reveals a grasping big toe instead of one in line with the other digits as humans have, this would be very strong evidence for tree dwelling. We will have to wait and see.

As a creationist scientist, I am greatly encouraged by this new fossil find. I can’t wait to see how the foot looks. If it turns out, as I expect, that the foot has an opposable big toe, it will be very difficult to fit such a foot into the Laetoli footprints. This will create a controversy because there will not be any alleged hominid ancestor that will fit those footprints. [Editor’s note: AiG will feature a more in-depth review of the Nature article, just arriving in homes this week, discussing this specimen soon.]