Scientists are debating the significance of yet another fossil hominid discovery. Media outlets have proclaimed Australopithecus sediba to be an evolutionary transition between modern humans and some ape-like ancestor (such as the famous australopithecine “Lucy”). 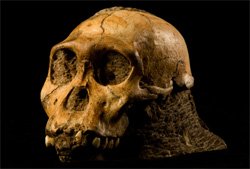 The remarkably well-preserved specimen known as Australopithecus sediba is thought to be an apelike ancestor of man. But the Bible makes it clear that all such fossils must be either distinctly ape or distinctly human—and not a supposed “missing link.” Photo by Brett Eloff courtesy of Lee Berger and the University of Witwatersrand

Scientists disagree, however, on just what the individual specimens represent. Some believe they should be classified as Homo instead of Australopithecus. Adding to the confusion is that evolutionists have dated the bones as younger than other remains already labeled Homo—which, if the dating were right, would imply that these individuals could not have been human ancestors.

Sediba is actually the fossil remains of a few individuals found in the Malapa Nature Reserve in South Africa, supposedly dating back almost two million years. They apparently were about 4 feet (1.2 m) tall, with long arms and small brains.

Some media outlets reported that human evolution’s picture now has to be redrawn.* This raises the question, why has so much been so wrong in the evolutionary story of human origins that it may have to be redrawn (again)?

Creationists are more cautious while interpreting news like this. For one thing, the bones have been examined by only one group of scientists, and their interpretation may be challenged dramatically as time passes. (Recall the “missing link” hype over Ida, which quickly evaporated last year.)

Also, it is impossible for us to determine the full range of features in the original, early post-Flood human population. While some cases are fairly clear (e.g., Neanderthals), others are difficult, considering the vague evidence that survives.

Creationists can be confident of this: the Creator God made humans to be distinct from all animals, in His image, and not from an apelike creature (Genesis 1). Based on experience, Sediba as a supposed “missing link” will likely fall by the wayside, just as Ida did.

* For example, according to Newsweek (April 8 online), the fossils “have such an unexpected appearance that they will redraw the picture of human evolution.” Also, the opening line of a Daily Mail (UK) article of April 5 (online) stated: “The discovery of a ‘missing link’ between man and apes could revolutionise our understanding of how we evolved.”