You can’t walk into Paria Canyon without being struck dumb. The bizarre landforms look just like waves of sand frozen in time. Perhaps that’s exactly what happened to cause “The Wave”—a mute testimony to the worldwide Flood!

Seventy miles north of the Grand Canyon is the spectacularly beautiful Wave at Paria Canyon. This unique landform looks like a wave of the sea, frozen in stone. With such stunning colors and shapes, it’s no wonder “the Wave” has appeared on the cover of many road atlases and books, and has been featured in numerous documentaries.

Located in a wild and remote region of the Western United States, this strange formation swirls with controversy. How old is this place? How was it formed?

The Wave is located above the Vermillion Cliffs near Kanab, Utah. These cliffs form one of the “steps” in the Grand Staircase north of Grand Canyon. Geologists agree that the rocks in the Grand Staircase once extended over the whole Grand Canyon area, but they were washed away during massive flooding. What catastrophic forces produced these layers and then washed them away?

Geologists who reject the Bible’s account of earth history believe these layers were originally sand dunes, laid down in dry conditions over a long period of time. But the global Flood as recorded in Genesis provides a much more reasonable explanation for such massive formations. Creation geologists believe huge sand waves were piled up and laid down deep under the ocean water. The fast currents then created tell-tale features, known as cross beds or “striations,” with the steep cut-offs we see today. 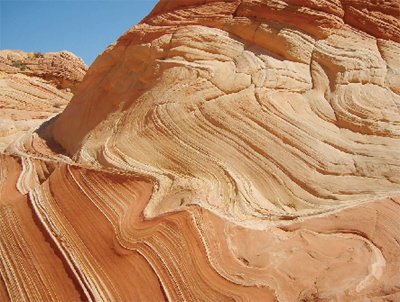 The swirling of sand slurries, like the one above, is evident throughout “The Wave” formation in the Western U.S.

The Wave is full of all sorts of curious rock features—including some that look like whirlpools. How do whirlpools get trapped in sandstone? First, the sand must be flowing very rapidly in a watery slurry. As the sand flows, whirlpools can form in it. Once the dense slurry stops, the whirlpools are frozen in place. When new deposits of sand and mud are then added on top of these layers, the pressure forces the water out, turning the wet sand into stone.

Just how large were these water currents, leaving behind huge “waves” preserved in stone? The cliffs behind the Wave show flow patterns that stretch for 5 miles (8 km). And the Wave is only a small part of the White Cliffs, which form the next step of the Grand Staircase, just above the Vermillion Cliffs. The White Cliffs are actually part of an even larger layer of sandstone, known as Navajo Sandstone, which extends throughout the Southwest portion of the United States, covering at least 135,000 square miles (350,000 sq. km), or about 370 miles by 370 miles (600 km by 600 km). 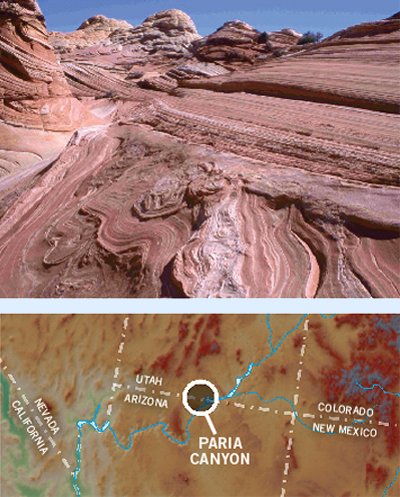 “The Wave” region extends for 5 miles (8 km), with wavy patterns (top) that are best explained by a catastrophic Flood, not blowing sand dunes. “The Wave” is located at the remote Paria Canyon in Utah (bottom).

The sand didn’t come from Utah. Based on the properties of the zircon minerals in the sandstone, geologists believe it came from the Appalachians, at least 1,800 miles (3000 km) away.1 What type of water current could carry sand such a long distance? It had to cross the entire continent!

The Wave is just one of many geologic wonders, all over the planet, that display the unprecedented destruction caused by the global Flood.

Greg Morgan is a nuclear safety engineer in Hanford, Washington. Married for twenty-seven years, with two grown children, he writes and teaches on the consistency between the Bible and science.
Previous Article God and Math Next Article New Ideas That Just Don’t Work